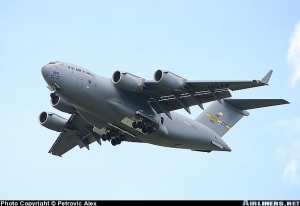 The portly but manoeuvreable C-17 has emerged from a prolonged and controversial development programme to become the backbone of the USAF’s strategic transport force. In trouble spots and disaster zones around the world, C-17s are often seen delivering equipment and supplies wherever they are needed.

The development of the C-17 began in February 1980 when a draft Request For Proposals (RFP) was issued by the US Air Force for a CX heavylift cargo transport. In October this document was formally issued. The RFP required an aircraft for the strategic airlift role, replacing the C-141 Starlifter and supplanting the C-5 Galaxy. It would have a fuselage cross-section sized to carry outsized loads such as an M1 Abrams main battle tank, suitable undercarriage and high-lift devices to enable it to perform short-field landings and thrust reversers to enhance manoeuvring on the ground.

CX designs were proposed by Boeing, Lockheed and the Douglas Aircraft division of McDonnell-Douglas. Douglas’s design drew upon the experience it had gained during the design and testing of the YC-15 jet-powered tactical transport which was intended to replace the C-130 Hercules. First flown in August 1975, the YC-15 never entered production. On 28 August 1981 the Douglas design was announced as the CX winner and the designation C-17 subsequently assigned. By early 1984 detail design was almost finalised and a full scale fuselage mock-up was constructed to evaluate cargo loading capability for different load combinations. In February 1985 a contract was placed for a C-17 prototype. A total buy of 210 airframes was anticipated at this time. However, Douglas’s lack of recent experience in managing complex military aircraft programmes soon showed as programmes milestones began to slip repeatedly, sub-contractors were changed and the estimated weight if the aircraft continued to rise. Costs vastly exceeded initial estimates and in April 1990 the planned production run was cut from 210 to 120 aircraft to save money.

In September 1990 the C-17A prototype (87-0025), referred to as T-1 because of it’s test role, was towed out of the factory at Long Beach, CA, to undergo fuselage pressure testing. Two other test airframes, T-2 for ‘static’ load testing and T-3 for ‘durability’ cyclic fatigue testing were not assigned military serial numbers. On 15 September 1991, T-1 made it’s first flight – actually a ferry flight to Edwards AFB where it was accepted by the 6510th Test Wing. Shortly afterwards, a major problem emerged back at Long Beach when the T-2 airframe suffered a wing structural failure at a loading condition much less severe that had been forecast. The necessary structural strengthening would add a further 1% to the weight of the wing. The first production C-17A (88-0265), referred to as P-1, made its first flight on 19 May 1992, joining T-1 at Edwards AFB the same day. P-2, the second production aircraft, featured a production standard avionics fit and made its first flight on 20 June 1992. After its problematic development programme, the flight test programme proceeded remarkably smoothly with virtually all test objectives being achieved on time.

The name Globemaster III was officially applied to the C-17 on 5 February 1993 by the head of Air Mobility Command General Ronald R. Fogleman. The first unit to operate the C-17 was the 437th Airlift Wing at Charleston AFB, SC, which received its first aircraft on 14 June 1993. Within months of achieving Initial Operational Capability (IOC) entering service, in mid December 1995 the 437th deployed 12 of its C-17s to Rhein Main, Germany to take part in the huge airlift operation required to establish IFOR peacekeeping forces in Bosnia. The benefits of the C-17 were immediately apparent, as it carried much of the US Army’s heavy equipment into Tuzla Airport, where the C-5A was too heavy to operate safely. The reduced ramp space taken up by the C-17 compared to the C-5 was also appreciated.

During the 1999 Kosovo War a detachment of C-17s from the 437th AW operated dozens of tactical airlift flights into Tirana in Albania from Ramstein AB in Germany, while other C-17s flew strategic airlift missions between the USA and Europe. Overall, C-17s contributed 60% of the total ALLIED FORCE transport missions, but comprised only 10% of the USAF airlift fleet.

On 16 May 2000 the British Ministry of Defence announced that it had chosen the C-17 to meet its requirement for the strategic transport of outsize loads. Four aircraft would be obtained on a 7 year lease from Boeing. The aircraft were built to Block XII standard incorporating an additional 10,000 US gal (37053 litre) fuel tank in the wing centre section, redesigned cockpit multi-function displays (MFDs) and updated navigation software. The first RAF aircraft (ZZ171) was handed over to 99 Sqn on 17 May 2001 and flown to its new base at RAF Brize Norton, Oxfordshire six days later. The fourth and last aircraft arrived on 24 August 2001. Training and logistic support for the RAF aircraft is provided by the USAF. The British C-17s faced their first major challenge when they took part in the Joint Rapid Reaction Force exercise ‘Saif Sareea II’ in Oman during October 200l. Such was the C-17’s effectiveness that the initial limited number of exercise flights was rapidly increased. Not long afterwards, RAF C-17s were making regular supply runs into Kabul to support operations in Afghanistan. 99 Squadron was also heavily committed to ferrying equipment prior to the Iraq war and still continues to make regular flights into Iraq direct from the UK. The expected annual usage rate for the British C-17s had been 3000 hours, but these aircraft are now seeing over 6000 hours usage and the acquisition of an additional aircraft is now planned.

While air strikes on Taliban/al-Qaeda forces in Afghanistan were being carried out by Allied air forces, USAF C-17s were busy providing a continuous airlift of supplies to the various coalition bases. At night C-17s dropped more than 2.4 million food parcels to Afghan civilians displaced by the fighting. During Operation Iraqi Freedom, in March 2003, C-17s carried the 173rd Airborne Brigade from Italy into Kurdish-controlled northern Iraq, for a 1000-troop night parachute drop. This was the first combat insertion of paratroopers using a C-17.

In FY2000 an order was placed for 15 additional aircraft to fulfill the Special Operations Low Level (SOLL) II mission, replacing aging C-141B aircraft. Since the start of series production, the manufacturer had been making strenuous efforts to reduce the unit cost of production C-17 aircraft and this effort was rewarded when the acquisition of a further 60 C-17As was officially approved on 15 August 2002. Even this additional number may not be sufficient to meet demand and further orders may eventually be forthcoming.

From the outside, the C-17 reveals little of its high technology design. It appears to be a conventional high-wing, four engined T-tailed jet transport. Inside it is a different story. The two-crew cockpit features digital displays and head-up displays. The aircraft is flown using a fighter-style control stick instead of the traditional yoke used on transport aircaft. The flying controls are managed by a quadruply redundant Fly-By-Wire control system with mechanical backup that operates 29 control surfaces – including an all-moving tailplane, two rudders, two ailerons, eight spoilers, four flaps and eight slats.

The supercritical aerofoil section wing is swept at 25º and features prominent winglets, which improve aerodynamic efficiency at the wing tips. Hung off the wing on cantilevered pylons are four Pratt & Whitney PW2040 turbofan engines. Based on the engines used on the Boeing 757, they are known by the military designation F117-PW-100. Each engine nacelle includes a thrust reverser, whereby a section of the engine cowling slides backwards to allow engine exhaust to be directed upward and forward. This function gives the C-17 the ability to complete a 180 º turn on a 90 ft (27.86 m) wide runway and to be able to reverse up a 2 per cent slope.

The positions of the engines allows the use of propulsive lift technology, first tested on the YC-15, in which the engine exhaust is trapped under the wing and forced to flow over both sides of the single split flap on the wing trailing edge. The exhaust then leaves the flap trailing edge at an angle related to the flap deflection. A full span leading edge slat helps the wing maintain optimum lift and stall characteristics. The combination of the features allows a steep, low speed final approach with a low landing speed.

The bulk of the fuselage is taken up with the cargo hold, which features a palletised load/unload system which can be handled by a single loadmaster. Powered rollers allow up to 18 standard 463L pallets to be accommodated in the 68 ft 1.5 in (21.11 m) long cargo compartment. The width and height available permits odd shaped cargo such as helicopters to be accepted with the minimum of preparation.

Attached to the fuselage are the low-drag pods for the main landing gear. The non-steerable six wheel per side main units spread the load to permit operation from most concrete hard standing areas. The steerable dual wheel nose gear retracts into the forward fuselage. An Auxiliary Power Unit (APU) in the starboard main gear fairing provides electrical power when the engines are not running.

Boeing’s hi-tech military airlifter is the right aircraft at the right time. As the rapid deployment of military forces or humanitarian relief aid becomes an ever more crucial capability, the C-17s proven ability to carry outsize loads into austere airfields is a vital asset which will ensure it remains a vital component of the USAFs inventory for many years to come.

‘STOL Progenitors: The Technology Path to a Large STOL Aircraft and the C-17’ [Order this book from UK]
by Bill Norton
American Institute of Aeronautics and Astronautics, Nov 2002   ISBN: 1563475766
* Story of the evolution of the technology used in the C-17.