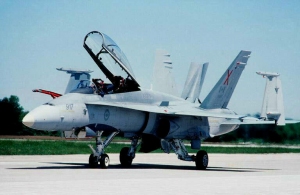 The F/A-18 Hornet is an all-weather aircraft used as both an attack and fighter aircraft. As a fighter, the Hornet is used as a fighter escort and for fleet air defense. In its attack role, it is used for interdiction and air support.

The F/A-18 Hornet is a twin engine, mid-wing, multi-role tactical aircraft. The F/A-18A and C are single seat aircraft and the F/A-18B and D are two-seaters. While the B aircraft is used mainly for training the D version is the current Navy aircraft performing the forward air control, reconnaissance, tactical air control and attack roles. The latest E and F models were rolled out in September 1995. The E being the single seater.

The Hornets origins go back to the 1960’s and Northrop’s Light-Weight Fighter project that eventually led to the YF-17 prototype. The YF-17’s first flight was on 9th June 1974. After the YF-16 was chosen by the USAF, US Congress decided to evaluate two aircraft for the Naval Air Combat Fighter (ACF) project. The YF-17 was not initially designed for carrier operation, so Northrop collaborated with McDonnell Douglas to win the competition with General Dynamics and LTV. After modifications by the two companies, the YF-17 became “model 267” and on 2nd May 1975, the US Navy declared the aircraft the winner. It is from this point that the Hornet becomes a McDonnell Douglas aircraft as they were the prime contractors. Originally there were two types – the F-18 and the A-18, but a Defense Systems Acquisition Review decided, on 8th December 1982, to call the aircraft the F/A-18. It is the only aircraft in services with US forces to have a dual designation. On 1st January 1977, Secretary of the Navy, W. Graham Claytor decided to call the F/A-18 “Hornet” after the USN ships with the same name.

The Hornet has been regularly upgraded since entering service in 1983. The first F/A-18’s equipped with night strike capability were delivered in November 1989. Since 1991, they have had F404-GE-402 enhanced performance engines fitted and since May 1994, the Hornet has been fitted with upgraded APG-73 radar.

Canada was the first export customer for the Hornet and it has the largest fleet of Hornets outside the US. The Canadian F/A-18’s are designated CF-188 by that country.