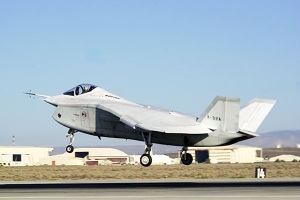 The Joint Strike Fighter (JSF) programme has been described as the largest single defence project in history, with a potential market for 5,000-8,000 aircraft and the key objective of reversing the continuing upward trend in military aircraft unit costs.
The origins of JSF lie in the realisation by the US Marine Corps and Royal Navy during the 1980s that a replacement for the Sea Harrier and AV-8B would be required after the year 2000. Various research studies were undertaken on both sides of the Atlantic into advanced Short Take-Off and Vertical Landing (STOVL) concepts. The best of these concepts appeared to involve the use of a dedicated lift-fan located behind the cockpit. In 1989, DARPA (Defense Advanced Research Projects Agency) took over leadership of the advanced STOVL project and focused the on-going effort into a phased development programme leading to a flying demonstrator aircraft using the powerful new engines developed for the YF-22 and YF-23 Advanced Tactical Fighter.

The Boeing X-32 uses a novel airframe shape combined with a direct-lift STOVL configuration. The AV-8B Harrier-style direct lift concept requires the lift nozzles to be on the centre of gravity of the aircraft. To achieve this, the engine is located in the front portion of the fuselage, with the vectoring nozzles immediately behind it, and then a long exhaust duct leading back to the afterburner and pitch-axis thrust vectoring nozzle at the rear. The engine position and overall dimension limitations dictated a very short nose. The thick delta wing was chosen to give good high-Alpha characteristics and its large volume allowed fuel tankage to give long range.

For the two CDA aircraft, the designation X-32A was allocated to the CTOL version and X-32B to the STOVL version. Unlike the Lockheed Martin X-35, there were no airframe changes required to demonstrate US Navy aircraft carrier (CV/CTOL) approach capabilities – the X-32A performed both roles. Apart from the lift nozzles on the STOVL version, there are a number of design differences between the two airframe configurations. The X-32A features a non-moving intake, and wide span wings with accentuated tip extensions. The X-32B features a moving intake cowl which translates forward during hover to allow more air into the engine. The fuselage is slightly shorter and the wing span has been narrowed to reduced weight. No wing leading edge lift devices are fitted. The twin lift nozzles are concealed behind doors in the fuselage belly when not in use.

Since the X-32 design was frozen, continued design evolution has resulted in the planned production version (model 375) gaining a conventional tailplane, to enhance manoeuvrability during approach to an aircraft carrier, and hence a stubby swept wing has been adopted rather than the original delta wing. The engine intake cowl will now be raked forward rather than backwards. Boeing anticipates that all three production versions will have the same length fuselage. The production version is known in the programme as the Preferred Weapons System Concept (PWSC).

The Lockheed Martin X-35 was selected as the winning JSF design on 26 October 2001. Some X-35 workshare may be awarded to Boeing as a consolation.