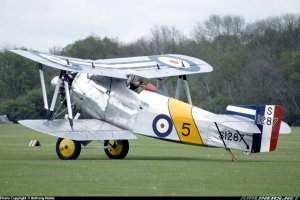 To trace the lineage of the Fairey Flycatcher, one has to go back to the Sopwith Sea Scout (later named Tabloid) which won the Schneider Trophy race for England in 1914. The Tabloid was developed into the Sopwith Baby, a rotary-engined biplane of the 1914-1918 war. The Fairey Aviation Co., built a slightly modified version of this aircraft, adding their new patent camber-changing trailing edge flaps, redesigned floats and a square cut fin and rudder. This became known as the Fairey Hamble Baby, of which 48 examples were built. With lessons learned from the Hamble Baby, the Fairey Pintail was designed. This was a fighter-reconnaissance seaplane/amphibian in which the wheeled undercarriage was mounted on a swinging arm and housed within the under surface of the wooden floats. This was the first post-war aircraft to built by Fairey.

Specification 6/22 was issued in 1922 for a deck landing single seat fighter to replace the ageing Nieuport Nightjar. The specification called for an aircraft which could operate as a landplane, seaplane or amphibian. Both Fairey and Parnall developed an aircraft to the specification, named the Flycatcher and the Plover. Small production batches of both were ordered, but in-service experience showed the Flycatcher to be superior, and the Fairey design won all subsequent production contracts.

The Flycatcher had an all-metal tubular steel structure for the front and central portion of the fuselage. The rear part of the fuselage being wood with fabric covering – as were the wings and tail. The rather ungainly and highly sprung undercarriage was interchangeable with floats. The wings had a prominent forward stagger, were single bay and braced by ‘N’ struts. Both the upper and lower planes incorporated the Patent Camber Gear which originated from the Hamble Baby. The first floatplanes and amphibians had wooden floats, but these were found to be unsuitable and Fairey-built metal floats were fitted to later aircraft. The undercarriage originated from the Fairey IIID, where the radius rods ran from the lower ends of the oleo legs to the inverted apex of a “V” strut arrangement. Hydraulic brakes were also fitted to later versions.

Armament consisted of 2 Vickers guns, mounted one on each side of the fuselage, firing through the propeller arc. Four 20 lb bombs could be carried under the lower wings.

The prototype (N163) made it’s first flight from Hamble on 28th November 1922 piloted by Vincent Nicholl. This was powered by a Jaguar II engine, which was replaced by a Jaguar IV in 1923, and then exhibited at the RAF display of that year. The second prototype (N164) was tested as a floatplane by Nicholl at Hamble on 5th May 1923, while the third prototype, an amphibian, (N165) was flown in mid 1923. Two development and production batches, of 9 aircraft total, were built between 1922 and 1923. A total of 192 production Flycatchers were produced between 1922 and 1930, the last being S1418.

The Flycatcher was stable in all axes, had a slow landing speed with excellent shock absorbing qualities and a good view for the pilot. Take off to unstick distance was 363 ft with no flaps, and 190 ft with 8 degrees of flap. Minimum speed with flaps down was only 47 mph. Initial deck landing trials were conducted on HMS Argus in February 1923 and the behaviour of the aircraft was deemed to be exemplary.

The Flycatcher had the responsiveness of the Sopwith Camel and the docility of the Sopwith Pup – a rare combination in one aircraft. The Flycatcher was the Fleet Air Arm’s only fighter until the advent of the Hawker Nimrod in 1932, and it served on all Royal Navy aircraft carriers. Originally these aircraft carriers had fore and aft arrester wires, running along the deck, but these were dispensed with in 1926 and Flycatchers routinely landed using only their brakes to stop the landing run. A Flycatcher was the first aircraft to be tested with transverse arrester wires, using an arrestor hook, in 1930. The Flycatcher was the last aircraft to be able to operate slip flights from the forward hangar below the main deck, being the last Royal Navy carrier aircraft to be able to take-off without the aid of a catapult. Flycatchers were capable of being flown from platforms on the turrets of warships, and were used in this way until about 1932.

For the British aircraft see the Fleet Air Arm Aircraft book below. 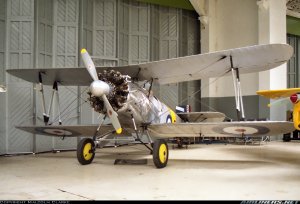 ‘Fairey Aircraft Since 1915’ [Order this book from Amazon UK]
by H A Taylor
Published by Putnam Aeronautical Books, 1988 ISBN: 0851778259
* Detailed company history with a chapter on the Flycatcher.

‘Fleet Air Arm Aircraft, Units and Ships 1920 to 1939’ [Order this book from Amazon UK]
by Ray Sturtivant and Dick Cronin
Published by Air-Britain (Historians) Ltd, 1998 ISBN: 0851302718
* Includes individual Flycatcher histories and the Flights that used it.

Roy Tassell has a nice 1/36 scale drawing of the Flycatcher Mk.I