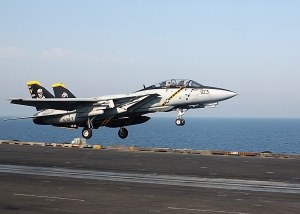 Triggered by the failure of the F-111B to meet Navy requirements, the VFX project was announced. On the 15th January 1969, Grumman was announced as competition winner for a new carrier-based fighter for the U.S. Navy. Emphasis had been placed on producing a comparatively small, light weight, high performance aircraft with a significant advance over the then current F-4 Phantom II. The primary mission was three fold; The first was as a fighter / Escort to clear contested air space of enemy fighters and protecting the strike force. The second mission was to defend the carrier task force with Combat Air Patrols (CAP) and interception operations. The third role was secondary attack on tactical ground targets.

The person responsible for the F-14 project was Admiral Tom Conolly, Deputy Chief, Naval Operations for Air. The aircraft was dubbed “Tom’s Cat” long before it was officially named “Tomcat”. (Naming their aircraft after ‘cats’ is a long held Grumman tradition of course).

The Grumman F-14 Tomcat is a supersonic, twin engined, variable sweep wing, two-place strike fighter. The aircraft has visual and all-weather attack capability. It can deliver both Phoenix and Sparrow missiles; it has an M61 Vulcan rotary cannon and Sidewinder missiles for air-to-air combat. The F-14 also has the LANTIRN m Targeting system that allows a variety of laser-guided bombs to be delivered for precision air-to-ground strikes. Tomcats equipped with Tactical Air Reconnaissance Pod System (TARPS) are the U.S. Navy’s only manned tactical reconnaissance aircraft.

Although the F-14 had an excellent airframe and equipment the ‘A’ version had problems with the TF30 engines. These were hard to maintain, and lacked the power needed to maneuver the aircraft properly. They were also prone to severe failure where compressor blades would break off and damage the rest of the engine. Modifications were made and steel cages were fitted to prevent broken blades from destroying the entire engine. The modifications were only a temporary solution and, in 1984, the General Electric F110-GE-400 engines were selected to replace the TF series engines.

F-14 Tomcat
(Air Force Technology: description of the technology in the F-14 + some photos)

Last of the Grumman Cats: The F-14 Tomcat
(Six colour profile drawings of F-14 markings from the 1970s)