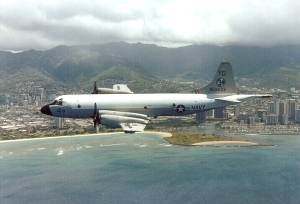 The basic airframe is adapted from the L-188 Electra commercial airliner and since its introduction in 1969, the P-3 Orion has undergone a series of configuration changes to implement improvements in a variety of mission and aircraft updates. These changes have been called “Updates”. Update I was in 1975 and incorporated new data processing avionics software. Update II in 1977 included an infrared detection system, a sonobuoy reference system, the Harpoon anti-ship missile and 28-channel magnetic tape recorder/reproducer.

The TECHEVAL (Technical Evaluation) for Update III began in March 1981. Update III was enhanced by a Channel Expansion (CHEX) program; CHEX doubled the number of sonobuoy channels that can be processed. Testing and evaluation was completed in June 1988.

The Orion also has an internal weapons bay and ten external weapons stations for carrying a mix of ASW torpedoes, depth charges and AGM-84 Harpoon anti-ship missiles. There are three hard points outboard of the engines on each wing and four on the wing centre section. Each wing pylon can carry up to 500lb (227kg) while the middle pylons can carry 1,000lb (454kg) of stores. The internal weapons bay can accommodate a variety of depth charges and mines or up to eight lightweight ASW torpedoes. Sonobuoys can be launched from external pods or from a set of tubes located internally aft of the weapons bay. AIM-9 Sidewinder air-to-air and AGM-65F Maverick anti-ship missiles have been test launched from the P-3. The last Navy P-3C came off the production line at the Lockheed plant in April 1990.