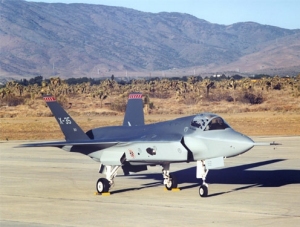 In aiming to use advanced technology to provide a leap forward in operational fighter capability and at the same time substantially reduce manufacturing costs, the Joint Strike Fighter (JSF) programme has ambitious goals. For the wining design the rewards could be enormous. A potential market for 5,000-8,000 aircraft has been forecast.

The origins of JSF lie in the realisation by the US Marine Corps and Royal Navy during the 1980s that a replacement for the Sea Harrier and AV-8B would be required after the year 2000. Various research studies were undertaken on both sides of the Atlantic into advanced Short Take-Off and Vertical Landing (STOVL) concepts. The best of these concepts appeared to involve the use of a dedicated lift-fan located behind the cockpit. In 1989, DARPA (Defense Advanced Research Projects Agency) took over leadership of the advanced STOVL project and focused the on-going effort into a phased development programme leading to a flying demonstrator aircraft using the powerful new engines developed for the YF-22 and YF-23 Advanced Tactical Fighter.

The design of the Lockheed Martin X-35 is clearly derived from that of the F-22 Raptor. The aerodynamic configuration is very similar, as is the application of stealth technology in the shaping of the fuselage. The STOVL version features a Rolls-Royce (Allison) designed lift-fan located behind the cockpit. The fan is mechanically driven by a shaft running from the engine and is designed to support almost half of the aircraft’s weight when in the hover. At the rear of the fuselage is a pitch-axis vectoring nozzle for the engine exhaust, which provides the remaining thrust to balance the aircraft.

For the two CDA aircraft, the designation X-35A was allocated to the CTOL version and X-35B to the STOVL version. Unlike Boeing, Lockheed Martin introduced a third version, the X-35C, to undertake simulated aircraft carrier (CV/CTOL) testing. This aircraft was produced by converting the X-35A after it had completed it’s planned flight trials. The X-35A and X-35B have very similar airframes, including the aft cockpit bulge and associated doors for the lift-fan, which is only fitted to the X-35B. In addition to the clamshell doors above and below the lift-fan bay are another set of doors in the aircraft spine serving an engine auxiliary intake for use at low forward speeds. When transitioning to and from the hover, all three sets of doors open or close as required. The X-35C was converted at Palmdale from the X-35A. It featured increased wing area and significantly larger tail surfaces to demonstrate carrier approach performance.

The production version of the X-35, known as the Preferred Weapons System Concept (PWSC), will feature a number of design changes. All versions will have the main air intakes reshaped and located further aft on the fuselage. The USAF’s CTOL version is considered the baseline model. The STOVL version is 81% common in terms of airframe structure, while the CV version is only 62% common. The CTOL and STOVL versions have the same wing design, which has increased area compared to the X-35A/B. The CV version has much larger wings and tail surfaces and strengthened landing gear, including a twin wheel noseleg. The CTOL and CV versions will not feature the slightly bulged area behind the cockpit, which houses the lift-fan on the STOVL version, allowing a larger canopy glazed area. Extra fuel will be accommodated in place of the lift fan. The CTOL and CV versions will also feature slightly bulged weapons bay doors to accommodate larger weapons.

The Lockheed Martin X-35 was selected as the winning JSF design on 26 October 2001.

Note: Manufacturing workshare is split between Lockheed Martin at Fort Worth and Northrop Grumman and BAE SYSTEMS. Final assembly will be at Fort Worth.