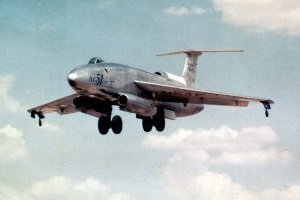 As the Cold War heated up between the West and the Soviet Union in the late 1940s, the United States Air Force moved ahead with plans to field a large number of close-support bomber squadrons with a new aircraft model, the Martin B-51 medium bomber. In the end, the urgency to field a jet bomber to replace the ageing A-26 Invader proved to much and the British-designed Canberra bomber was selected for front line use. The XB-51 concept was a radical new design of airplane. It had a swept-wing configuration and a tri-engined appearance – the first of its kind to be incorporated into a military aircraft and years ahead of Boeing’s 727 airliner. The sudden onset of the Korean War spelled the end of the XB-51 program. At the beginning of the war, the US Air Force was in dire need of medium bombers to assist ground troops. The Canberra was the logical selection for them. The British aircraft design was well proven, maneuverable and reliable, and more importantly for the US military, it could be mass produced in short order.

The true history of the XB-51 program can be traced back to the Douglas A-26 Invader close-support bomber that performed so well in combat in the closing stages of World War II. In the immediate post war years, the US Army Air Force, decided it needed a replacement plane to tackle possible Soviet tank columns attacking over the central plains of Europe. Three major companies submitted designs and specification bids for the new plane. At the end of the evaluation process, the design submitted by the Martin Company was rewarded with the contract, under the designation XA-45. In May 1946 two prototypes were ordered under the new designaton of XB-51. However, in the spring of 1946, the United States Air Force sent out a revised requirement for a medium close-support bomber with more emphasis on speed and less on load-carrying. The big and heavy XB-51 design could not meet these new requirements and so in February 1947 Martin submitted a new design. This was accepted by the USAAF and a radical new XB-51 was born.

Almost every component that was selected to be incorporated in the new bomber was advanced. Aside from the already mentioned swept wing design and its tri-jet configuration, the XB-51 was to employ a rotary weapons bay that would enable the airplane to deliver it’s bombs while flying at high speeds. Something that the newest US bombers, the B-1 Lancer and B-2 Spirit incorporate today. But the real trademark of the XB-51 was speed. The aircraft was designed to outrun almost all of the fighter aircraft of the early 1950s. The XB-51 power plant consisted of three 5,820 lb-thrust General Electric J47 turbojet engines. Aside from these powerful (for the time) engines, the aircraft were designed to be equipped with an additional four 1000 lb-thrust RATO bottles to assist in take-off. With these engines, the airplane reached a top speed of 645 miles per hours. Its cruising speed was 538 mph.

The bomber was manned by a crew of two. The pilot sat beneath a fighter style “bubble” canopy. The second crew member, the navigator/radio-operator, sat behind the pilot. The navigator could only view the sky through a small observation window on the left side of the fuselage. The cockpit was pressurized and temperature conditioned. The XB-51 would have a payload capability of 10,400lbs of ordnance in its internal bomb bay. It was also equipped with eight powerful 20-mm cannons located in the nose of the aircraft. The cannons could fire 1,280 rounds of ammunition before they needed to be reloaded. Operational ceiling for the new aircraft was an amazing 41,400 ft. Another impressive characteristic of the XB-51 was its un-refuelled ferry range of nearly 1,600 miles.

On the morning of the 28th October 1949, the XB-51 first prototype, tail number 46685, took to the air for the first time at Baltimore, Maryland. The plane flew as anticipated by Martin. The Air Force was so impressed with the flight testing of the XB-51 that it ordered Martin to finish work on the other test plane, serialled 46686. As it turned out, they would be the only two B-51s ever to be built. The situation in the Korean Peninsula had taken a turn for the worse in 1950 when Communist North Korean troops invaded the South. The US needed to quickly get into service a modern close-support aircraft for the theater and the only proven design available was that of the English Electric Canberra. The Canberra was chosen by the Air Force on March 1951, and this decision meant the end of Martin’s XB-51 close-support bomber.

The two XB-51 prototypes cost the US government the sum of 12.5 million dollars. Much of their subsequent career was spent at Edwards AFB perfecting the rotary bomb door and performing bomb delivery trials, before piloting accidents ended the lives of both aircraft. Martin, who had to “eat” much of the development cost for aircraft, quickly bounced back with the development and production contracts for the B-57 bomber – the Canberra fitted with the XB-51s rotary bomb door – which went on to become a very successful aircraft. The Panther, the name that the Air Force may have given to the XB-51, was an aircraft born ahead of its time. Many of the remarkable features incorporated in today’s bombers, came directly from the XB-51 program.