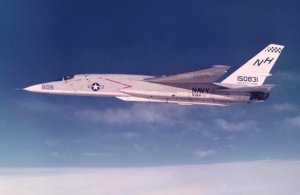 Just hours after the United States Army Air Forces massive B-29 bombers had delivered the atom bomb to the Japanese cities of Hiroshima and Nagasaki; the US Navy began to realize that its position as the forefront of America’s defense and first strike capability could be in jeopardy. The continued development of the long distance bomber as a first strike platform and its perceive efficiency in bringing both Germany and Japan to their knees, made the Navy’s top brass very worried about losing the service’s primary position within the US Armed Forces. Things were more worrisome when the newly formed US Department of Defense separated the air force section from the Army; creating a brand new service: the US Air Force. Within months after its creation, the Air Force assumed primary role on the use of the country’s nuclear arsenal. This development, added to the perception that with the coming of the jet age, the navy would be relegated to a more littoral duty; forced the Navy’s leaders to find a weapon platform capable of providing the service with a nuclear option of its own. The Navy’s first attempt to field this concept was to equip its main strike force, the aircraft carriers; with aircraft capable of delivering nuclear weapons. The acquisition of North American’s AJ Savage and the Douglas Company A-3 Skywarrior bombers in the late 1940s and early 50s, both subsonic aircraft; represented a first step toward nuclear strike independency. But due to the increasing pace of aircraft developments, each example became obsolete after a just a few years of front line service. The Navy needed a new aircraft, and North American Corporation was once again ready to provide the service with its requirement.

In mid November 1953, a group of North American engineers commenced preliminary work on the development of a new type of aircraft. An aircraft more similar to the Air Force’s medium bomber concept than with the Navy’s history of carrier based bomber planes. North American designers proposed a radical departure from the current carrier aircraft situation. An all-weather, long range carrier based bomber capable of reaching speeds up to Mach 2 was envisioned at North American and that vision was eagerly expected to become a reality by the Navy. To meet the Navy’s and their own company expectations, the designers, lead by a brilliant engineer named Frank G. Compton; began the work promptly on what was referred to as North American General Purpose Attack Weapon System (NAGPAW) or designated project NA-233. After months of close consultation with Navy engineers, North American decided to base its new airplane on a twin engine concept. The idea behind the dual propulsion system was the aircraft’s survivability in case of one of the power plants failing. Another requirement for the concept was the ability to reach Mach 2 speed. To achieve this parameter, the aircraft was fitted with two of the most powerful engine systems available at the time: the General Electric J79-2 afterburning jet engine, capable of providing the aircraft with 15,150lb of thrust. To ensure the airframe’s integrity at high flying speeds and the aerodynamic conditions encountered by the airframe at those speeds, some heat sensitive areas of the fuselage were covered by titanium plates. The wings surfaces were machined as one complete piece from a combination of aluminum/lithium alloys. Nitrogen, not conventional hydraulic fluids, was used by the 233 in some of the hottest areas of the airframe. Even gold was utilized as heat reflectors in the engine’s bays. In order to capture high aerodynamic angles, the 233 was fitted with a small highly-loaded swept wing configuration with a powerful flap system and a one piece powered vertical tail. The wingtips folded up to allow the aircraft to be housed in an aircraft carrier hangar. The single, vertical tail structure also folded for hangar deck operations. The NA was one of the first aircraft to use a fully variable engine inlet system installed to reduce supersonic air to subsonic levels before it reached the engine main chamber, thus providing the engines with ultimate performance at any speed level. Beside the innovations on the airframe, the latest technology was implemented on the 233 avionics package. A state-of-the-art Versatile Digital Analyzer or VERDAN computer, one of the first solid state computer systems ever utilized on an aircraft; was fitted under the pilot’s seat. But the real technology breakthrough was the North American Autonetics System. The AN-ASB 12 System, as the package was referred as, included a multiple mode radar system housed in the aircraft’s nose cone. The radar was fitted with the Pilot’s Projected Display Indicator or PPDI, an early generation head-up display. A close captioned TV camera mechanism was installed under the nose for daylight targeting operations. Its image transferred directly to the pilot’s HUD and the rear seated navigator radar display. A first of its kind, terrain avoidance radar system, similar to that on the Navaho Cruise Missile, was used to guide the plane while on night operations. The aircraft’s also had the distinction of being one of the first designs to be fitted with a partial fly-by-wire system. The 233 was manned by an after mentioned crew of two. A pilot and a bombardier/navigator. The pilot was seated in the front of the pressurized cabin and the navigator on the rear, atop the advanced electronic package assigned to the aircraft. Original, the navigator canopy did not posses any view windows or reflective mirrors because company engineers estimated that the navigator’s instruments would be easy to ready in darkness and to protect them from the anticipated EM emissions expected from a detonated nuclear bomb. The whole cabin was housed on a structure fitted with an HS-1 rocket design to boost the ejection seats in case of an emergency.

The first 233 prototype rolled out from North American’s Columbus, Ohio factory on the afternoon of May 16th, 1958; when it was officially named the Vigilante. The first fly took place on August 31st, 1958. The aircraft performed as good as advertise by the North American design team. It achieved supersonic speed for the first time on September 5th of that year. Carrier trials began on the USS Saratoga on the morning of July 1960 with fourteen take-off and landing test flights performed by the sixth Vigilante prototype built. On the afternoon of December 13th, 1960, with Commander Leroy Heath at the controls and Lieutenant Larry Monroe in the back seat, the Vigilante, flying at Mach 2.1, set a new world altitude record for a bomber type aircraft when it climbed above 91,451ft while carrying a payload of 2,403lb. The Vigilante’s payload was storage in an unorthodox internal bomb bay without external doors, located in the airframe underbelly. This unique system was installed on the Vigilante because of the aircraft’s main purpose: the deliverance of nuclear ordinance. The engineers at North American figured that the aircraft had an enhanced chance of escaping a blast from the new thermonuclear weapons if the ordinance was ejected to the rear instead of a direct level drop. This was achieved with the assistance of a complex long duct system that extended back between the two engines. The duct would house the nuclear ordinance until the order for release was given. The aircraft was designed to carry one of the Mk 27, Mk 28, or Mk 43 free fall nuclear bombs in its internal bomb bay. Additionally, a pair of smaller, Mk 83 or Mk 84 nuclear bombs could be fitted on pylons underneath each wing.

Deliveries of the A3J Vigilante commenced in the spring of 1961 and lasted until the summer of 1963, when the US Navy shifted its main nuclear deterrent platform from its carrier fleet to the new Polaris augmented submarine force. When the production line was terminated in 1963, fifty nine examples had been delivered to the navy. The Vigilante’s first carrier deployment occurred when they were assigned to the USS Enterprise on its maiden cruise in August 1962. In September of that year, the US Defense Department changed the new aircraft designation A-5A, due to the decision to standardize all US Armed Forces aircraft designations. Once the Vigilante entered front line service, the aircraft was not well received by carrier air commanders who, although impressed with the aircraft payload capacity and airframe structure, felt that an aircraft filled such advanced technologies were primed to become a major maintenance problem. They were right. Constant shutdowns by the VERDAN system meant that the aircraft’s turn-around capabilities were severely curtailed. Problems also arose with the use of its fly-by-wire system that required many man hours to prepare to full operational mode. Also the aircraft’s large size made it difficult for airmen to operate during take off and landing situations. With the shift of the US Navy’s nuclear deterrence platform, the days of the Vigilante as an offensive aircraft were numbered. Rather than scrapping the examples they already possesed, the Navy devised a new role for the Vigilante, a role that would made the aircraft’s name “fit the bill”. The Navy’s deep reconnaissance mission had been neglected partially by the lack of a long range aircraft; this role was tailor-made for the A-5A. All of the Navy’s Vigilantes were returned to North American for conversion to RA platforms. Eventually, fifty three examples were converted between early 1963 and the spring of 1963. They were augmented by a batch of fifty five newly produced aircraft and given the RA-5C designation. The RA-5C retained the A-5A performance capabilities as well as its avionic package. The main upgrade to the system was the installation of optical, electronic, and electromagnetic sensors storage on the aircraft’s once exposed bomb bay. They included an AN-ASS21 infrared sensor for the continued filming of thermal targets images at angles of 140 degrees, a Westinghouse Side Looking Airborne Radar or SLAR for all side-by-side image mapping; an AN-ALQ61 Electronic Intelligence Unit System that would pick-up radar emissions and triangulate their originating coordinates, frequencies, and electronic signal patters. A vast array of optical camera systems such as panoramic, oblique or vertical; were fitted around the airframe. The complete reconnaissance system was under the control of the Recon Officer seated were the bombardier/navigator used to be.

The first RA-5A entered carrier service in 1964. It went on to see duty in the Vietnam War. The RA version proved to be more successful than its predecessor. Usually, the Vigilante was the last aircraft launched from the carrier during an operation, since its speed allowed it to catch-up quickly with the mission package. Eventually, the US Navy ordered the Vigilante production line to re-open and the first of a new batch of Vigilantes were delivered to the Navy. Forty four examples were ordered, but only thirty-six units were actually completed by the time the line was closed again in August 1970. The last operational RA-5C Vigilante squadron was disbanded in September 1979. A short lifespan for such a revolutionary aircraft design. In the end, it was a magnificent aircraft, but without a clear mission, it was an unsupported plane.

* Only 6 built as A3J-2, remainder converted to RA-5C on the production line.

wikipedia: A-5 Vigilante
(Useful profile of the A-5)

North American A-5 Vigilante
(Short profile with some photos)