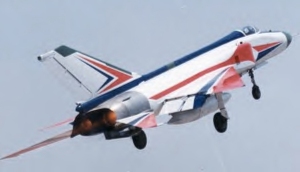 The J-8 (Chinese name Jianjiji-8 (Fighter Aircraft 8 or Jian-8) was the subject of an advanced fighter programme that started in China in the late 1960s. The J-8 was the first PLAAF aircraft of domestic design. The overall configuration is a straightforward enlargement of the MiG-21/J-7 layout to accommodate two engines. Although it resembled Mikoyan’s experimental Ye-152A, contrary to some reports, it was not based on that aircraft. Production began in December 1979, with about 100 aircraft of the first configuration entering service.

The J-8 is a delta-wing aircraft with vertical tail surfaces similar to late-production MiG-21s. It also incorporates technology gleaned from the Soviet MiG-23 variable geometry aircraft.

Design work on the improved J-8-II began in 1980, with production beginning in the late 1980s. The J-8-II has a completely new front end with much larger radar and ventral inlets, along with other less obvious improvements. The improved aircraft was comparable in aerodynamic performance to the Soviet Su-15 “Flagon”.

The Jian-8-IIM upgrade was developed by both China and Russia, (“M” stands for export only aircraft), this model has now become a new-generation fighter. The first flight was on 31 March 1996. This aircraft has upgraded electronic systems, it is claimed to survive damage better that the single-engined F-16A/C and the Mirage 2000. The high-altitude high-speed performance of the J-8-IIM is superior to the F-16A/C, F/A-18 and Mirage 2000; and its radar and electronic equipment are better than the F-16A and similar to the F-16C, F/A-18 and Mirage 2000-5. New WP-13B engines power the aircraft and it has greatly improved low-altitude manoeuvrability.

One thought on “Shenyang J-8 ‘Finback’”