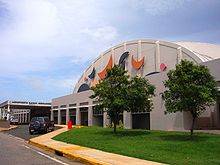 Puerto Rico is one of the business air destinations in the Caribbean as its serves more than 200 daily passenger flights out of one international and two regional airports.
For local officials, that number should easily be doubled if more charter flights use the regional facilities as staging centers.

But despite massive investments in infrastructure and marketing promotions, the facilities have yet to receive a single charter flight. The problem is puzzling at one of the newest facilities in Puerto Rico.

The potential of the Rafael Hernandez Airport in Aguadilla, located in the northwestern part of the island, has not been fully exploited even after the Puerto Rican government invested millions of dollars in making it an attractive destination.
The main problem with the regional facility is the lack of charter flights, which have been absent from the airport despite a 2008 law which provide a 50 percent discount on air operations to any company that implement that type of service.

“It’s a puzzling the situation. The government has invested resources in promoting this type of flight operation in order to stimulate the Portal del Sol Tourism District and we need to see the results of this investment, especially in this tough economic time,” said Sofia Estevez, the Tourism Company’s Sub-director.

According to the executive, the responsibility of promoting this kind of industry rest on the shoulders of the Corporation for the Economic Development of the Western Region (IDEO by its Spanish acronym), because it’s the only organization with the authority to promote and develop charter flights to the airport.

“IDEO have not presented many promotional packages to investors. That’s the truth. But recently the corporation signed a deal that would provide the airport with its first charter flight by March of 2011,” she said.

Estevez also mentioned that the deal, which IDEO has already committee $1.4 million of its own resources in price reduction and promotion cost, involves a Spanish company and could serve as the gateway for future business.

“If this IDEO program is successful, we can see a booming industry flourishing at the Aguadilla airport. That would produce more jobs to the region and stimulate the island’s overall profile,” Estevez added.

Since 2003, the Puerto Rico Ports Authority has invested millions of dollars in renovating and upgrading the almost 60 year old airport, including the improvement to the 12,000 feet long runway.

According to the Airports General Manager, Arnaldo Deleo, when the government enacted Law 67, known as the Law for the Incentive Programs to Charter Flights at the Rafael Hernandez Airport, in May 2008, it was with idea of producing a constant flow of fights to the area, but despite the incentives presented by the law, no passenger charter have landed at the facility.
“We have invested heavily in the airport to upgrade its facilities. With have a 60 sq/ft terminal waiting for people to use and we hope that once the charter industry take off, we will need to add space,” Deleo said.

Among the incentives granted by Law 67 was a 50 percent reduction in take-off and landing operations as well as matching fund program when a company provides a regular scheduled flight program.

The Aguadilla Airport is currently use by discount airliners such as Jet Blue, Continental Air and Spirit, which provides the customers with six combine daily flights, most of them to Orlando, Fort Lauderdale and New York.