The development of the jet engine revolutionized the design of both military and civilian aircraft, but it was the former, particularly the fighter platform, which benefited first. Frank Whittle’s achievement in developing the jet has been well covered, but the task of producing the first generation of aircraft designed to use his engines, mainly by the Gloster Aircraft Company, is not so well documented, especially some of its most obscure, early projects. One of those ‘block’ projects was the little know Gloster Rocket fighter.

The ‘Rocket’ proposal was briefly mentioned in an August 1943 declaration paper. In it, the company stated that “it marked the introduction of a new design for a fighter and shows the possibility of a future important advance along the road towards ultimate development. It outlines the prospect of achieving a low-level speed of 550 miles per hour and a climb rate, commencing at sea level, of around 9,000 feet per minute’.

The original Rocket design was similar in scope as the Gloster E.5/42 Ace, which although popular in many circles, never passed out of the mock-up stages. The main difference between the two proposals was the Rocket’s twin side-by-side engine installation which served almost as a single operating unit. Two prototypes Rolls-Royce B.37s occupied the same position in the rear fuselage area as the Halford engine had occupied in the original E.5/42 Ace. Of course, the air frame’s width was modified in order to accommodate the new format. The extra width was just about the level necessary to duct the air intakes on either side of the frontal frame section. Gloster engineers believed that the combine thrust of the two units, when fully developed, would be around 5,000lb. This increase on power was much more than could be effectively utilized from a single power plant in a similar aircraft-type.

Nevertheless, there were no profound differences between the E.5/42 and the Rocket. Those which could actually be seen were basically that of the fuselage length and the center wing structure. The frontal part of the airplane, outer wing sections, the undercarriage and tailplane were almost identically. The front part design was one of the first ergonomically concepts ever conceived. Besides housing the all important pressure cockpit, the section was filled with state of the art sensors and other related materials. The Rocket model was expected to use the newly high speed wing structure developed by the Royal Aircraft Establishment for the E.28/39 project. 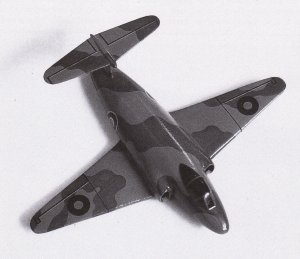 Model of the Gloster Rocket. (photo, via author)

Because it similarities with the E.5/42, Gloster expected that full production, if ordered, would had been shift and relative, easy. The Rocket would have been fitted with B.37 engines. Each of them would supply around 2,200 pounds of thrust given the aircraft a top speed of 545mph at sea level. Climb rate was to be 7,650′ per minute. Operational ceiling was estimated to be at 55,000 feet.

On the morning of August 31st 1943, Gloster’s managers reported to Whittle about the possibility of installing the vaunted W4.100 engine on the E.5/42 platform. The idea was quickly nixed because it was ‘not a very suitable solution’ according to Whittle. Still, the inventor was reluctant to accept the tandem configuration. Early on the program life, the RAE and Gloster estimated that the Rocket pure, raw speed would be at around 449mph at sea leave. Impressive, but far below what the Royal Air Force desired.

On October 9th, Frank Whittle meet with Dr. Roxbee Cox and several high members of the RAE at Ministry of Aircraft Production. The conference centered on a new project, the M.52 supersonic research airplane and the Rocket. Whittle, now a full doubter of the whole twin engine configuration on the Rocket concept, stated that ‘if they (RAE) are going for a super fighter (Rocket), an aero plane which has not yet gone beyond the drawing stage, they should make a proper job and put it the most suited power plant, instead of fiddling with several units’.

No definitely conclusion was reach in the meeting. Engineers at Gloster would continued to work on the drawing for several more months before the whole idea was shelved in favor of a similar, but vastly more promising one: the E.1/44 Ace.