This museum was dedicated to the historic aircraft manufacturer Boulton Paul, and the aviation heritage of the Wolverhampton area. The exhibits were housed within the former Boulton Paul factory. Although more of a busy workshop than a display museum, the rare exhibits and active and friendly volunteer workers made this low key location well worth a visit.
During October 2011 the new owners of the factory announced plans to relocate work elsewhere and shut the Fordhouses site permanently at the end of 2012. This meant that the Heritage Project had to find a new home. Eventually RAF Museum Cosford offered to house the archives and exhibits, and these were duly moved between October 2012 and April 2013.

Within the Smiths Aerospace complex, in Wobaston Road, on the left hand side, 1.5 miles from the A445 Wolverhampton to Stafford road.

This attraction closed permanently at the end of October 2012.

Note: Upon closure the airframes on loan to BPA were removed by their owners. Exhibits owned by the BPA were relocated to RAF Museum Cosford.

Thanks to Alec Brew for updating this information. 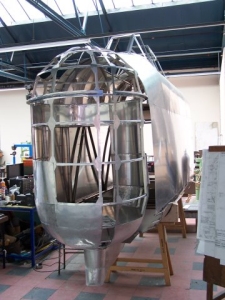