The former AIRBASE living aviation museum at Coventry moved to Newquay Airport during the winter of 2012/2013, and then restarted operations under the name Classic Air Force.

Officially opened on 29th March 2013, the Classic Air Force museum maintains a fleet of fully flyable historic aircraft, many of which are available for pleasure flights. Visitors can get close-up to the aircraft and even see inside a Dakota cockpit, (if it’s not due to fly).

Some of the aircraft are still awaiting the move to Newquay, and further enhancements to the hangar displays are also expected. A number of special events are planned for the coming year.

At Newquay Airport, off the A3059 to Newquay, Cornwall. The site can be reached by following the new road signposted as ‘Aerohub’ and continuing to the car park next to the largest hangar.

Note: Aircraft noted as ‘Stored’ are currently at Coventry Airport. 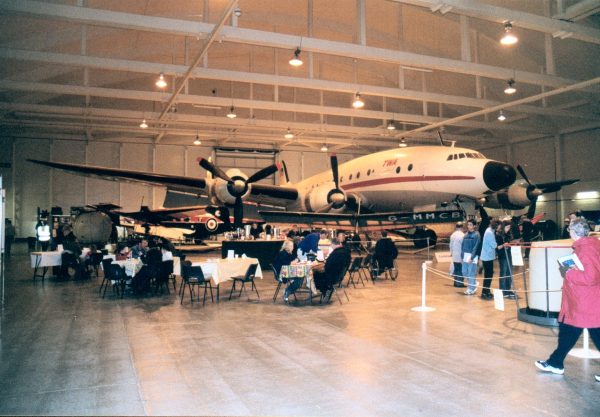 The Wroughton ‘out station’ near Swindon houses the large object store for the Science Museum in London, and holds all the large exhibits that are not on display there. In particular, visitors can see a number of airliners from the Air Transport Collection, plus other large exhibits such as agricultural machinery, cars and lorries. Among the aircraft on display are some very rare items, including the Boeing 247, Handley Page Gugnunc and the only Lockheed Constellation in the UK. A number of public open days and special events are held during the summer season.

For opening times and special events, please refer to the official website.

Usually free, but there can be a charge for special events.

A very large site that is fully open to the public, telling the story of the dockyard and naval warfare. The Gannet is owned by 849 Squadron Association, and was previously located at Culdrose. Large naval exhibits include HMS Cavalier, the only surviving British WW2 destroyer, and 1960s submarine HMS Ocelot. Between 1999 and 2004 this location was known as ‘World Naval Base’.

Chatham Historic Dockyard, east of Rochester, north of the A321, in Kent. Well signposted. From Junction 1 of the A2/M2, follow the A289 to the Medway Tunnel and then turn right towards Chatham after exiting the tunnel.

Gannet AEW.3 XL500 has been bought by Tim Manna of Kennet Aviation for restoration to airworthiness as G-KAEW. 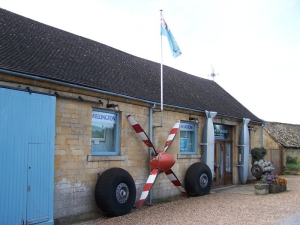 An offshoot of the successful aviation art and print gallery, the museum tells the stories behind some of the paintings and prints on show with the aid of photographs and artefacts. The emphasis is on illustrating the personal side of wartime operations. The history of the local airfield and its Vickers Wellington OTU is also portrayed.

On the A44 Northeast of Cheltenham, to the west of Moreton-in-Marsh village, Gloucestershire. Well signposted.

The museum is located in an underground emergency wartime command and control bunker, and houses a collection of aviation artefacts. Displays cover the history of Wellesbourne Mountford airfield, together with various aircraft components and memorabilia. There is a small aircraft park, including the nose of Vulcan XA903. This aircraft was used to test the Olympus engines of Concorde in the 1960s, and a small dedicated group of enthusiasts is trying to restore some of the additional test equipment used in this aircraft. The museum was offically opened on 14 April 1991. Elsewhere on the airfield, Vulcan XM655 undertakes taxi runs on occasions.

Located at Wellesbourne Mountford airfield, south of the B4086 near Wellesbourne, 5 miles east of Stratford-on-Avon, Warwickshire.

* Owned by the XM655 Maintenance and Preservation Society.
Note: Avro Vulcan B.1 nose XA903 was sold and has now left the site. 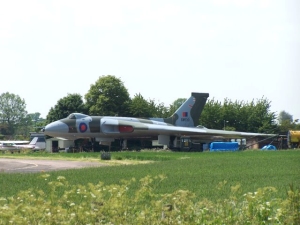 During World War Two, Sleap was a Bomber Command training base. From January 1944 it was used to train glider pilots for the airborne assaults of D-Day and Arnhem. Through the co-operation of the Shropshire Aero Club, the Wartime Aircraft Recovery Group operates a museum on the site. This all-volunteer group investigates crash sites and recovers and displays artifacts as a memorial to pilots that gave their lives operating in the Shropshire area during World War II. The displays include a number of aero engines, and a reconstruction of an airfield Flight Office. The location was previously known as the Wartime Aircraft Recovery Group Aviation Museum.

Sleap Aerodrome, south west of Wem, Shropshire. Wem is on the B5476 north of Shrewsbury, and Sleap can be reached from a ‘C’ road off the B5476.

Open Saturday and Sunday, 10.00 am to 5.00 pm, from May to October. Other times by prior arrangement.

Any photographs illustrating this museum would be welcome.
Unofficial Museum Guide

The Transport Museum comprises the most comprehensive transport collection in Ireland. It includes ‘The Flight Experience’, an interactive exhibition developed in partnership with Bombardier Aerospace featuring aviation and the aerospace industry. The activities of local pioneers Harry Ferguson and Lilian Bland are highlighted. Other transport displays include the Irish Railway Collection, road transport exhibits, a ‘Titanic’ exhibition and a recreation of an Ulster town of the early 1900s.
A Short Sealand is now undergoing restoration by the museum, and the nose section is now viewable from the display area. The Ferguson Monoplane reproduction has some original parts, including the pilot’s seat.

At Cultra Manor, near Holywood, on the A2 Bangor road, 7 miles north east from Belfast city centre, County Down. Well signposted.

The museum is run by the Ulster Aviation Society, which aims to preserve the province’s aeronautical past. A large number of artefacts and photographs are exhibited, in addition the aircraft listed below. Originally located at Langford Lodge airfield under the name ‘Ulster Aviation Society Heritage Centre’, the Museum was forced to close in late 2004 and put all its exhibits into storage. Fortunately, a new site at Long Kesh has now been secured and the museum is being re-established. It is not yet open to the public.

At Long Kesh Airfield, on Halftown Road, off the A3 Lisburn to Lurgan road. Also reached from the A1 Lisburn to Newry road, by turning off at Hillsborough and following Culcavy Road, which goes under the M1 and becomes Halftown Road.

The new site is not yet open to the public.

Thanks to Michael McBurney of the Ulster Aviation Society for permission to use these photos.
Unofficial Museum Guide

Located on the former RAF Woodhall Spa, wartime home of 617 ‘Dambusters’ and 92, 619 & 627 Squadrons is this visitors centre. The history of the base and its units are portrayed by various displays and artefacts. Other displays show life in wartime Lincolnshire.

On the B1192 between Woodhall Spa and RAF Coningsby. Signposted from the A153.

Any photographs illustrating this museum would be welcome.
Unofficial Museum Guide

Thinktank is Birmingham’s unique and award-winning museum of science and discovery housed at Millennium Point.
This exciting science centre offers ten galleries of historical artefacts, modern interactives and futuristic facts. It’s an incredibly modern museum where visitors can explore everything from aircraft and steam engines to intestines and taste buds and even emotional robots.
Among the exhibits are a Supermarine Spitfire, built at the local Vickers Armstrong plant in Castle Bromwich in 1944, and a Hawker Hurricane built in 1943 by Hawker aircraft of Kingston & Langley, representing the 300 built by Austin of Longbridge, Birmingham during World War 2.

Also to be found here are countless examples of Birmingham’s engineering heritage, including motorcycles, cars and a working steam engine. 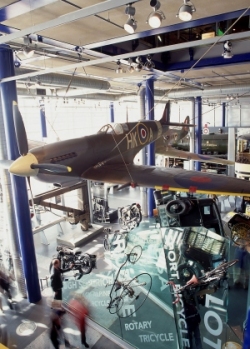 Spitfire IX ML427
(photo, Thinktank)
Thanks to Laura Taylor for help with updating this page.