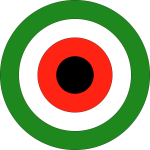 Military aviation started in Kuwait when the Security Department of Kuwait began to operate a number of Auster aircraft supplied by the Kuwait Aero Club. These were soon supplemented by a pair of Doves. In 1961 a growing threat by Iraq to invade Kuwait was averted by rapidly-deployed British military reinforcements, but this lead to the Air Wing being reorganised as the Kuwait Air Force. The Air Force took delivery of its first jet aircraft in 1962 and expanded rapidly with additional helicopters and other aircraft. Hawker Hunters and then Lightnings formed the nucleus of a fighter force that now operates F/A-18 Hornets. During the Iraqi invasion on 2nd August 1990, KAF aircraft were forced to flee to Bahrain to escape capture. The KAF then regrouped in Saudi Arabia, and was able to conduct offensive operations alongside coalition forces during the United Nations campaign to liberate Kuwait from occupation.

The Kuwait military serial numbering system consists of a three digit mumber, e.g. 414 for F/A-18C and 145 for Hawk Mk.64. The numbers are reused once a type has been retired.

The KAF is organised into nine Squadrons at three main bases.

In addition to the above, during the 1991 Gulf War KAF aircraft were based at Dhahran in Saudi Arabia.
Military Air Bases Listing – to be added.

One thought on “Kuwait Air Force”