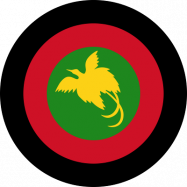 The Papua New Guinea Defence Force (PNGDF) was first formed in January 1973 from the existing Australian Army land forces units serving in the Territory of Papua New Guinea at that time. These primarily consisted of infantry units of native soldiers with Australian officers and NCOs. An Air Operations Element, (originally called the Air Transport Wing), was created in 1975, shortly before independence was achieved in September 1975. The first aircraft being three C-47 Dakotas donated by Australia.

The aircraft of the PNG DF Air Operations Element are fully operational.

The Air Operations Element currently has no subsidiary units.

Historical Order of Battle for 1990

All current PNG DF aircraft and helicopters are based at Jacksons International Airport, Port Moresby. The military base is on the other side of the runway to the civilian operators.

The PNG DF has previously used five air bases: Lae, Madang, Port Moresby, Rabaul and Wewak. The main air base was at Lae, with the a secondary base at Port Moresby. After Lae City airport was closed, the main base moved to Port Moresby.