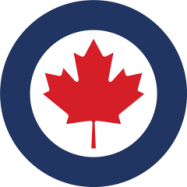 A short-lived Canadian Air Force was established in November 1918 in Europe, but disbanded in February 1920. Back at home, a new Canadian Air Force was formed in the same month by the Army as an auxiliary reservist force. On 1 April 1924 the Canadian Air Force was granted the title ‘Royal’ and gained a permanent staff. On 19 November 1938 the RCAF became an independent service, separate from the Army. On 1 February 1968 it amalgamated with the Army and Navy into a single service – the Canadian Armed Forces (CAF). In 1975, the various CAF aviation units were reorganised into a single Air Command. On 31 July 1997, the previous organisation of Air Transport Group, Fighter Group, Maritime Air Group and 10 Tactical Air Group was replaced by 1 Canadian Air Division/Canadian NORAD Region (1 CAD/CANR). The word ‘Armed’ was dropped from the force title around the same time, resulting in the air force being known as the Canadian Forces Air Command. On 16 August 2011, the CAF Air Command was restored to its traditional title of Royal Canadian Air force.

All RCAF aircraft and helicopters are currently active.

Aircraft operating with the RCAF carry numerical serial numbers. The numbers have been issued in four different series:

First Series (1922-1928)
RCAF aircraft initially carried civil registrations in the sequence G-CYAA to G-CYZZ, with only the last two letters actually displayed on the aircraft, e.g. Puss Moth UT.
Second Series (1928-1968)
In 1928 the military aircraft registration system was switched to a numerical sequence. This numerical sequence consisted of a three-digit number allocated in blocks by aircraft function: 1-300 for trainers, 301-400 for fighters, 401-600 for General Purpose, 601-700 for Transports, 701-800 for Bombers, 801-1000 for Flying Boats. As example is Douglas Digby 740.
Third Series (1939-1968)
By 1939 the available numbers in some blocks had been used up, and so a new sequence of four-digit serials was adopted. The numbers were allocated in blocks by aircraft type, with spaces left for future procurement, e.g. Cessna Crane 8000. In 1942 the system was extended to five-digit numbers.
Fourth Series (1968-Present)
For the merger of Air Force, Navy and Army into the Canadian Armed Forces (CAF), the Canadian military serial numbering system was changed to a six digit number. The first three numbers replicate the aircraft designation number and identify the aircraft type. The last three numbers are the individual airframe identity, and count from x00 or x01 for each type. An example is CF-101B Voodoo 101033. Newly procured aircraft adopted the revised system immediately, but existing aircraft were only renumbered in the period 1970 to 1973. This system was retained when the CAF reverted to its traditional title of Royal Canadian Air Force,
RAF Aircraft
Aircraft operated by 400-series Squadrons in Europe, North Africa and the Far East often used RAF-supplied aircraft, which retained their RAF serials.
Instructional Airframes
Unflyable aircraft used for ground training purposes were allocated a number in the range 1-1000 with a letter prefix of A, B or C, e.g. Harvard A175. After unification in 1968 the prefix was generally replaced by a suffix, e.g. Canadair CF-116 906B.

Aircraft of the Canadian Armed Forces