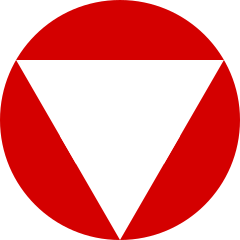 Following the breakup of the Austro-Hungarian Empire, a German-Austrian Flying Troop (Deutschösterreichische Fliegertruppe) was founded as an air policing service, with ex-wartime crews and aircraft. In 1919 the DF was ordered to be disbanded by the Allied Control Commission. On 1 April 1936 the Austrian Republic regained full sovereignty, although it was still prohibited from having any military aircraft. Even so, the Austrian Army quickly set up an Air Force. On 13 March 1938 Austria was incorporated into Germany, and the Air Force merged with the Luftwaffe. On 15 May 1955 Austria was re-established as a sovereign state. The present Air Force was formed in the same year.

A replacement for the Eurofighter Typhoon may be obtained, which could also replace the SAAB 105s.

Ministry of Defence, Hütteldorfstrasse 126, Vienna A-1142.

The air force is organised into three Kommando (Commands) – Air Surveillance, Training and Air Support – each comprising one or two Wings with between two and four Squadrons each.

The main air bases currently used are Tulln/Langenlebarn, Zeltweg, Aigen im Ennstal and Linz/Horsching. In addition, aircraft are detached from the parent units to another two air bases.

This section describes and illustrates the various national insignia used by the Austrian Air Force since its formation:

1955-present
The main marking is displayed on the fuselage sides of the helicopters, and in the standard six positions on aircraft. A fin flash is not carried. Aircraft do not carry service titles.

This page gives details of some of the aircraft types that were offered or promised to the Austrian Air Force but not delivered, cancelled official orders, and types that have been falsely reported as being in service.

British Aerospace BAe 146-200QT
Demonstrator G-BSTA was due to be leased to Austria in 1991, and was painted up in OLk colours, but the sale was cancelled at the last minute.

Grumman Gulfstream I
One Gulfstream I was reportedly operated by the Austrian Government in 1971, but it did not enter OLk service.