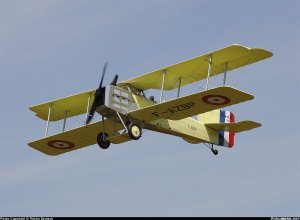 When Louis Breguet began the design of his Type 14 in 1916 he was totally unaware of the success that his aircraft was to achieve. The prototype of the big cumbersome two-seater, powered by a 220 hp Renault engine with a large frontal radiator was flown by Breguet himself on 21 November 1916 at Villacoublay. An unusual feature of the aircraft was the wide use of Duralumin in the fuselage. An initial batch of 580 Br 14.A2 reconnaissance models were ordered in April 1917 and at this point in time the prototype Br 14.B2 was built and delivered, this being the bomber version. The Br 14 was much in demand during the last years of the 1914-18 war, which resulted in the production of 5,500 before the war ended, this including both types. The B2 version differed from the A2 in having a lower wing of increased span with full span flaps and a glazed side panel to the observers cockpit, as well as Michelin bomb racks. Both versions were armed with a forward firing Vickers gun for the pilot and twin Lewis guns for the observer. Some A2s had a Lewis gun mounted on the top wing in place of the Vickers and a downward firing Lewis for protection from below and for trench strafing (the first recorded gunship). The B2 could also carry thirty-two 8 kg bombs although the A2 only carried 4 small bombs. The Breguet 14 was supplied to seventy-one French escadrilles on the Western Front, five escadrilles in Serbia, three in Greece, six in Morocco and eight in Macedonia as well as two Belgian escadrilles. Poland used them in the Kiev Offensive during the Polish-Bolshevik war in 1920. Two hundred and twenty-nine A2s, forty-seven B2s and one hundred E2 trainers were supplied to the American Expeditionary Force (A.E.F.) in 1918. The aircraft were widely used for both day and night bombing in the last year of the war.

During its life time the Breguet Br 14 was fitted with various engines including the 300 hp Renault 12 Fcx (one version with the Rateau supercharger), a 370 hp Lorraine-Dietrich, a 400 hp Fiat A-12 bis and a 400 hp Liberty 12. The construction of the aircraft was contracted to Michelin, Renault, SIDAM, Schmitt, Bellanger, Latecoere, Darracq and Farman. Variants included the 14 B1 single seat bomber, 14 S ambulance, 14 T/Toe civil versions and one 14 H central float seaplane.

After the war, ex-military aircraft were converted to carry mail, while others were adapted to the passenger role possibly being the first French airliner. Some conversions had a 2 seat cabin behind the pilot, termed The Limosine, while others sported a 4 seat glazed compartment in a position between the wings and flown from the rear cockpit. Most of the conversions were undertaken by the Societe Industrielle d’Aviation Latecoere and were used by the French postal service and mail service in Brazil, Uruguay and Argentina. The French postal system stretched to most European countries as well as French protectorates in Africa. One of the pilots being Jean Mermoz who later came to fame with his Trans-Southern Atlantic flights only in more up to date Latercoere types.

During its long post-war career in the French Aviation Militaire the Breguet 14 was used by at least 10 foreign air forces including those in South America and the Far East.

The Breguet 14 could easily be compared with the latter day Douglas DC-3 with regard to its various uses but not its longevity. More than 8,000 were built before production ended in 1926 and the type was still in use by French forces up until 1932. 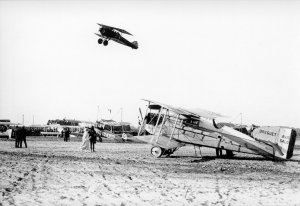 Fiat-engined Breguet 14 T with Avro 504
G-EAJU in the background. (photo, via author)

Not Guatemala Air Force as some sources state.

Note: Some sources mention licenced production from 1920 by Spain of the Breguet 14 B.2 with a Liberty engine. Although a licence may have been acquired, there doesn’t seem to have been any aircraft actually built. CASA was not created until March 1923 and did not build any.

Some Br 14 aircraft were also reportedly assembled from spares by the French military workshops in Indo-China.

‘Reconnaissance and Bomber Aircraft of the 1914-1918 War’
by W M Lamberton
Published by Harleyford Publications Ltd, 1962 ISBN: n/a
* Includes a section on the Breguet 14.