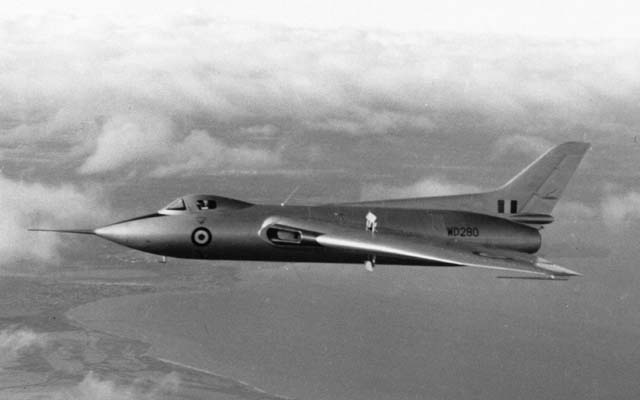 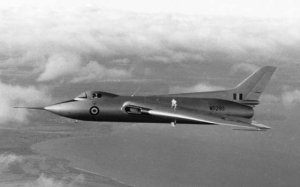 In the late 1940s, the high speed characteristics of delta-shaped (i.e. triangular planform) wings were relatively well understood theoretically, but little was known about their behaviour at low speeds, where various aerodynamic factors made analysis very difficult. Before an aircraft could be built which took advantage of the potential high performance a delta-wing offered, there was an obvious need for a research aircraft which could provide scientists and engineers with practical information on the handling characteristics of this untried wing planform. This research aircraft was the Avro 707, the first British aircraft with a delta-wing.

The origins of the Avro 707 are intertwined with those of the Avro Vulcan. In 1947 the Avro design team were busy working on determining the optimum configuration for the Type 698 jet bomber, which eventually became the Vulcan. The layout eventually decided upon was that of a delta-shaped wing, with no tailplane. This configuration had many performance advantages, but had never been flown on a British aircraft before. Discussions between Avro and the procurement authority (the Ministry of Supply) ensued on the best approach to minimise the risks associated with such an untried aerodynamic approach. It was agreed that a number of flying scale models of the delta wing would provide advance information for the Type 698 final design and give confidence in the overall design philosophy. The models proposed comprised two one-third scale aircraft for low speed research, designated Avro Type 707, and two half-scale aircraft for high speed high altitude research, designated Avro Type 710. After some vacillation, the Type 710 design was dropped and replaced by a single one-third scale aircraft under the designation Type 707A.

The first Type 707 aircraft (serial VX784) as a relatively simple design using many components from existing aircraft types and construction proceeded quite rapidly. It featured a rather unusual bifurcated dorsal air intake behind the cockpit for the Rolls-Royce Derwent engine, a clear-view canopy taken from a Gloster Meteor and a sharply tapered nose cone. The short stubby-looking aircraft made its maiden flight on 4 September 1949 at Boscombe Down, and sufficient flight hours were built up to allow a static appearance at the 1949 SBAC show at Farnborough two days later. Tragically, test pilot Eric Esler lost control of the aircraft at low speed on 31st September and fatally crashed near Blackbushe. The probable cause was a sudden control circuit failure causing the air brakes to be locked open and thus provoking a stall.

The loss of the first prototype resulted in work on the second Type 707 aircraft being suspended for a time, but was then restarted with increased urgency. A number of modifications were introduced to save time and simplify the construction. The long pointed nose section intended for the Type 707A was grafted onto the fuselage, resulting in the new aircraft being 12 ft (3.66 m) longer than the original. Other changes included a different degree of wing leading edge sweep, modified elevators and air brakes. A Gloster Meteor cockpit canopy, Avro Athena main undercarriage and a lengthened Hawker P.1052 nose leg were incorporated in the design. Redesignated Type 707B (serial VX790), the maiden flight took place at Boscombe Down on 5 September 1950.

Flight testing of the 707B from Dunsfold soon justified Avro’s faith in the delta wing and its relatively docile handling characteristics. In February 1951, the ‘inverted-w’ bifurcated dorsal air intake had been replaced by more efficient and more elegant single intake with a NACA venturi inlet, and by August 1951 an ejection seat had been installed and a revised cockpit canopy fitted. Primarily designed for flight testing in the 80-350 knots speed range, the aircraft nevertheless quickly ran into problems with canopy turbulence causing starvation of the dorsal engine intake and it was resolved to abandon this feature on the forthcoming Type 707A. The contribution of the Type 707B to the Type 698 programme was rather limited because a good deal of time was spent on modifications which were relevant only to the 707B itself – principally attempts to cure pitch instability. It did however assist in defining the relatively high ground-incidence angle which a delta wing required for take-off. On 21 September 1951 VX790 was damaged in a landing accident and returned to Woodford for repair. Upon returning to Boscombe Down it took up general research duties with the Royal Aircraft Establishment (RAE) and Empire Test Pilots School (ETPS), until badly damaged in another landing accident at Farnborough on 25 September 1956 in the hands of an ETPS student. The aircraft was judged to be not worth repairing and subsequently used for spares for the remaining 707A and 707C aircraft. It was dumped at RAE Bedford in 1960.

The third aircraft in the series was the Type 707A (serial WD280), which first flew at Boscombe Down on 14 June 1951, after being transported down from Woodford like the previous aircraft. This aircraft was designed to fly at high subsonic Mach numbers and differed from the 707B in having a scaled-down Type 698 wing, complete with wing root engine intakes, cropped wing tips and hydraulically powered flying control surfaces. The absence of a dorsal air intake allowed an elegant extended dorsal fin to be fitted. For high altitude work the cockpit was partially pressurised. Unfortunately, a lot of flight time was spend in eliminating some of the problems with the new flying control system, and the eventual contribution to the Type 698 programme amounted to very little. In 1954 WD280 was fitted with a modified wing with a kinked leading edge, and after successful testing this later became the Vulcan ‘Phase Two’ wing modification. In 1956 WD280 was assigned to the Australian Aeronautical Research Council (AARC) and shipped on HMAS Melbouurne to Australia, where low speed flight trials were conducted from RAAF Laverton. On 10 February 1967, WD280 was struck off charge and sold to a local resident, who kept it in his back garden. In 1999 the aircraft was brought by the RAAF Museum and moved to Point Cook, where it is now on display.

On 13 November 1951, three additional aircraft were ordered under Issue 2 of Specification E.10/49. These comprised a second Type 707A (serial WZ736) and the first two of four planned side-by-side conversion trainers designated 707C (serialled WZ739 and WZ744). The 707Cs were intend to familiarise pilots with the characteristics of delta-winged aircraft, but the early Vulcans proved easy to fly and WZ739 was later cancelled. The two remaining aircraft were assembled at Avro’s repair and overhaul works at Bracebridge Heath, just south of Lincoln. WZ736 was first flown from nearby RAF Waddington on 20 February 1953 and WZ744 followed on 1 July 1953. Both aircraft were flown to Woodford and remained there for production acceptance testing before being handed over to the Royal Aircraft Establishment (RAE) at Farnborough and Bedford. Neither aircraft was directly involved in the Vulcan development programme and spent their time involved in general research – WZ736 was involved in auto-throttle development trials until withdrawn in 1964, and WZ744 flew nearly 200 hours in the development of fly-by-wire electrically signalled hydraulic flying controls before being retired in January 1967. The two aircraft now survive in aircraft museums: WZ736 in the Manchester Museum of Science and Industry, and WZ744 at the RAF Museum, Cosford.

For various reasons, the early Avro 707s took too long to reach the flight test stage, and consequently their direct contribution to the Type 698 Vulcan programme was comparatively small. However, the Avro 707 family of research aircraft gave British aircraft designers early confidence in the general handling characteristics of the delta-wing, which lead to its adoption on other aircraft types (several of which where cancelled in 1957), and some of the systems tested found a direct application on other military aircraft programmes.

Thanks to Glyn Owen, Mike Draper, Phil Butler and John Hopton for their help with this page.