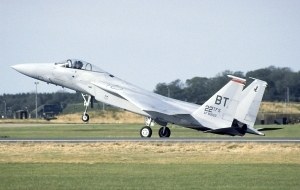 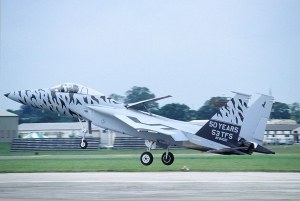 On 23rd December 1969 McDonnell Douglas was named winner of the “FX” contest to build a new air superiority fighter. There was no “XF-15” as the aircraft was ordered straight “off the drawing board”. The most unusual part of the Eagle development was the use of 3/8th scale glider models which were launched from a NASA NB-52B at Dryden Flight Research Centre. During the flight test programme record attempts were carried out at Grand Forks AFB in North Dakota, these records included times to heights varying from 3,000 meters to 30,000 meters.

The F-15B is the two-seat training version of the F-15A, appart from the second seat and some minor internal changes the A and B versions have the same performance characteristics.

On 26th February 1979 the first F-15C flew, and deliveries began in mid 1980. The F-15C is externally identical to the ‘A’ model when not carrying the FAST (Fuel And Sensor Tactical) packs. These packs are now referred to as Conformal Fuel Tanks (CFT). Internally the F-15C has additional wing leading edge tanks and additional tanks in the central fuselage, the extra weight of fuel raised the gross weight of the F-15C to over 68,000lb, so items such as breaks, tyres and wheels had to be strengthened. The AN/APG-63 radar was equipped with Programmable Signal Processor (PSP), this high speed computer controls the radar modes through its software, this allows switching between different modes. Some F-15Cs can carry up to 18 cluster bombs or 6 Mk.82 bombs and can release them at supersonic speeds.

The F-15 Multi-Stage Improvement Programme (MSIP) is a joint programme carried out by McDonnell Douglas and the USAF’s Warner Robins Logistics Centre in Georgia. Upgrades were incorporated into the production line and then retrofitted to earlier production aircraft. MSIP II is to upgrade the F-15C/D models, the main part of which is to fit APG-70 radar and the AIM-120 AMRAAM missile.

The F-15E Strike Eagle was a privately funded feasability study to adapt the basic F-15 to the air-to-ground role. The first modified demonstrator aircraft flew on 8th July 1980. It was equipped with a modified APG-63 radar that used synthetic aperture radar techniques and the back seat was fitted out for a weapons System Officer (WSO).

‘F-15 Eagle in Detail and Scale – Detail And Scale Vol.14’
by Bert Kinzey
Published by Aero Publishers Inc, 1984 ISBN: ?
* B+W photographs of external and inernal details plus several pages of scale drawings for all variants.

‘Modern Military Aircraft: F-15 Eagle’ [Order this DVD from Amazon UK]
* DVD which takes you into the cockpit of the F-15

‘Great Planes: McDonnell-Douglas F-15 Eagle’
* DVD documentary on the history of the F-15