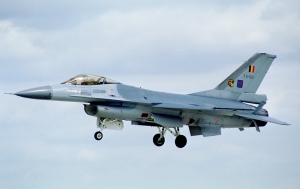 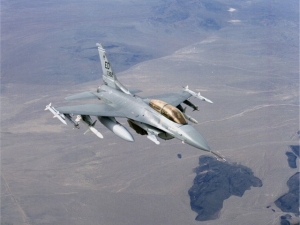 In January 1972 the Lightweight Fighter Programme asked for designs from several American manufacturers. They were told to tailor their specifications toward developing a lightweight superiority fighter. General Dynamics and Northrop were asked to build prototypes. These were to be strictly technology demonstrators. Northrop produced the twin-engine YF-17 and General Dynamics came up with the compact YF-16 with one engine. The Lightweight Fighter competition was completed in 1975. On 13th January 1975 the USAF announced that the YF-16’s performance had made it the winner of its Air Combat Fighter (ACF) competition.

General Dynamics was selected a finalist in the USAF’s programme to demonstrate superior dogfighting capabilities in a lightweight, low cost fighter prototype. This eventually led to production of the F-16. Since its small beginning with an initial USAF order for 650 aircraft, the F-16 has become one of the largest and most successful military aircraft in aviation history.

The F-16 Fighting Falcon is a compact, multi-role fighter aircraft. In the air combat role, the F-16’s maneouverability and combat radius exceed that of all potential enemy fighter aircraft. It can locate targets in all weather conditions and detect low flying aircraft in radar ground clutter. In the air-to-surface role, the F-16 can fly over 500 miles, deliver its weapons accurately, defend itself, and return to base. An all-weather capability allows it to accurately deliver ordnance during bad weather or at night. With a full load of internal fuel the F-16 can withstand up to 9G’s. The bubble cockpit canopy gives the pilot unobstructed vision forward and upward and much improved vision over the side and rear.

The F-16 first flew in December 1976. The first operational F-16A was delivered to the 388th TFW at Hill AFB, Utah in January 1979. The two-seat version, the F-16B, has two cockpits each about the same size as the single ‘A’ version cockpit. To make room for the second cockpit the forward fuselage fuel tank and avionics growth space is reduced.

The F-16C and F-16D are improved versions of the ‘A’ and ‘B’ and have the latest cockpit control and display technology. A consortium between the US and four NATO countries built the F-16: Belgium, Denmark, Norway and the Netherlands. These countries jointly constructed an initial 348 F-16’s for their air forces. Current USAF plans are for the Block 40/42 and 50/52 F-16’s to equip the USAF’s active units and Block 25/30/32 aircraft to equip Air National Guard and Air Force Reserve units.

Aircraft delivered to Belgium and Denmark + 1 a/c to Egypt.

The Lockheed Martin F-16
(Good profile of development, variants, service use and derivatives)

F-16 Fighting Falcon
(Air Force Technology: description of the technology included in the latest versions of the F-16)

Scale Drawings:
See the ‘Uncovering the Lockheed Martin F-16’ or ‘Lock On’ titles above.

‘F-16 Falcon – Modern Military Aircraft’ [Order this DVD from Amazon UK]
* Good profile of the F-16, it’s weapons and a view from the cockpit.