In March 2013 Bristow Helicopters was awarded a contract to provide a complete Search and Rescue service around the UK coastline, replacing ageing military SAR helicopters and also taking over the service previously provided by CHC Scotia. To fulfil this contract, Bristow ordered eleven new-build AW189, for delivery from 2015. Note: Although I-PTFF (c/no 49005) appeared in HM Coastguard colours in September 2014, this was just for publicity purposes, the aircraft was not intended for Coastguard service. The AW189 was originally expected to enter service in 2015, but a delay in achieving ice protection system certification for this new helicopter design meant service entry was only achieved in July 2016. All eleven helicopters are scheduled to be in service by mid 2017. 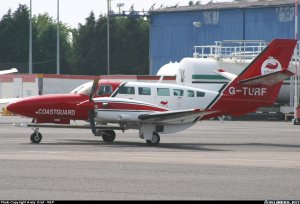 Under the terms of the July 2000 Pollution Control contract, Air Atlantique were obliged to provide a dedicated Cessna F406 modified to spray chemicals from a belly tank. The aircraft is based at Inverness Airport. It is not clear which specific aircraft this is, although G-LEAF has been photographed with a belly tank. A provision of the contract is that a further F406 be available when required, and this aircraft is possibly G-FIND (c/n 0045). 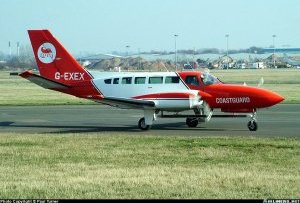 One Cessna 404 Titan II operated by Air Atlantique (initially as Atlantic Air Transport Ltd, now Reconnaissance Ventures Ltd) under contract for locating and reporting maritime pollution. This aircraft was initially G-TASK, but replaced circa 2002 by G-EXEX. The latter was fitted with Sideways Looking Airborne Radar (SLAR), Ultra Violet (UV), InfraRed (IR) and visual sensors while the former had a reduced fit including only a single SLAR antenna on the port side. Based at Inverness Airport. 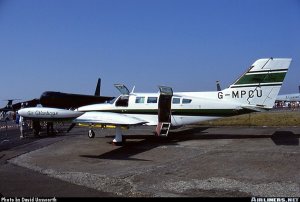 One Cessna 402B Utililiner operated by Air Atlantique (Atlantic Air Transport Ltd – AAT) under contract for locating and reporting maritime pollution. Based at Coventry? 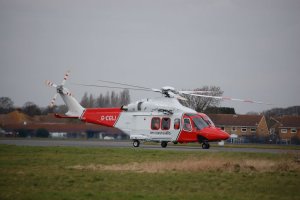 Three new-build AW 139 (originally AB 139) on order for delivery in early 2008. Used for search and rescue duties from bases at Lee-On-Solent and Portland. Operated by CHC Scotia under contract. To be replaced by the AW189 from 2016. 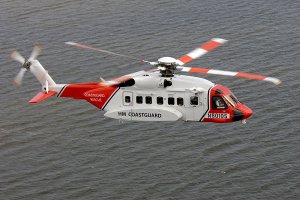 Four new-build S-92As delivered from 2007. Operated by CHC Scotia under the ‘Gap SAR’ contract. The first was formally handed over on 1 March 2007 at HeliExpo in the USA. Used for Search and Rescue (SAR) duties, two each based at Stornoway and Sumburgh. In 2012 this contract was awarded to Bristow, who took over operations in 2013. The CHC helicopters were then used for an Irish Coast Guard contract, while Bristow provided 4 new S-92s.

In March 2013 Bristow Helicopters was awarded a contract to provide a complete Search and Rescue service around the UK coastline, replacing ageing military SAR helicopters. To fulfil this contract Bristow ordered an additional 10 new-build S-92s. All the additional helicopters were in service by early 2016. 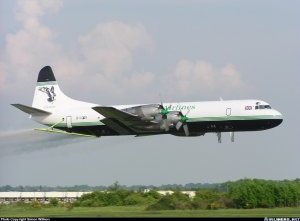 Two Lockheed L-188C(F) Electra operated by Air Atlantique (Atlantic Airlines Ltd) under contract for pollution control. Fitted with removable aerial spray equipment to combat oil pollution at sea. Each aircraft can carry 15 tonnes of dispersant. Based at Coventry Airport. One aircraft assigned to the contract is usually G-LOFE, the other is drawn from G-LOFB or G-LOFC depending on availability. 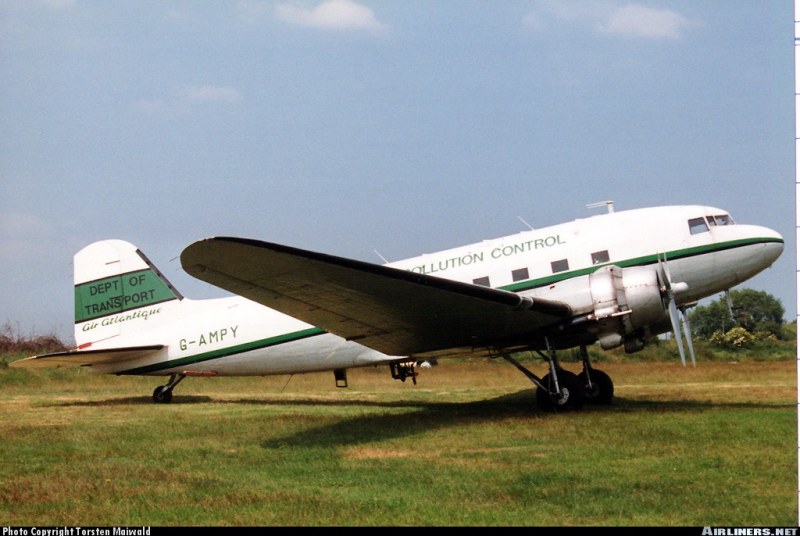 From 1982 Harvestair operated two Dakotas for spraying major oil and chemical spills from ships under contract from the Department of Transport. In October 1987 the contract was passed to Air Atlantique.

Seven DC-3/C-47 Dakotas were operated at various times by Air Atlantique (Atlantic Air Transport Ltd) under a pollution control contract which was placed in October 1987 and renewed in 1990?. Fitted with spray bars under the tailplane for applying dispersant chemicals. Based at Coventry Airport. Withdrawn in 2003. 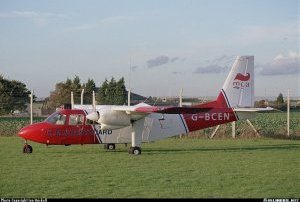 The original pollution control contract was contracted to Harvestair, which provided five yellow-and-black painted BN-2A Islanders from mid-1982 until October 1987. Each was fitted with a prominent spraying boom attached to the fuselage. Their chemical spraying role was subsequently taken over by Air Atlantique Dakotas and Islanders.

Islanders G-AXZK and G-BCEN were used by Air Atlantique to supplement the Dakotas in the Pollution Control role in the early years of the contract, 1987-1990. G-BNXA was also used for a short while during 1987-1988. All three appeared in the green and white colours applied to the Dakotas.

From 1998 Air Atlantique provided one BN-2A-26 Islander (G-BCEN) for fixed-wing maritime surveillance and search-and-rescue duties in the Dover Straits area on a 5-yearly renewable contract. It was equipped with InfraRed and digital photographic equipment and a fourteen-man air-droppable life raft. It was based at Manston, Kent, until mid 2005, but later moved to Lydd. The aircraft was withdrawn in 2007, without replacement.