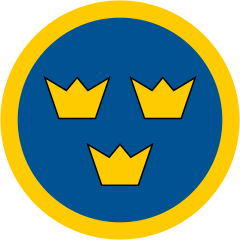 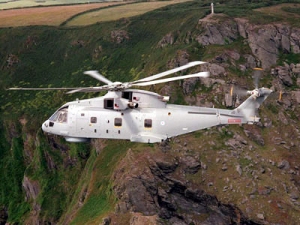 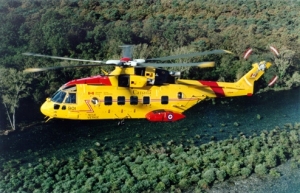 Despite it’s somewhat protracted development programme, the EH 101 has emerged as one of the world’s most capable medium-sized helicopters. Export orders are mounting steadily and a campaign to sell the helicopter to the US Armed Forces is now underway. The recognised virtues of the EH 101 have their origins in a project called the WG.34.

In the spring of 1977 the MoD (Navy) issued Naval Staff Requirement 6646 for a new ASW helicopter, to replace the Westland Sea King in service with the Royal Navy. By late 1977 Westland Helicopters had started work on a design studies, to meet this requirement. The outcome was a project designated WG.34 which, in September 1978, was selected by the MoD for further development.

Meanwhile, in Italy the Italian Navy and Agusta were having similar discussions over a requirement to replace the Agusta-built Sea Kings then in service. The Marina Militari Italiana wanted a primarily shore-based helicopter which could detect submarines in the shallow waters of the Mediterranean.

Work on the WG.34 was halted while a series of inter-company discussions took place over the possibility of a joint venture meeting both countries requirements. The talks were successful and in November 1979 the British and Italian government signed a memorandum of understanding (MOU) formalising the joint venture. The two companies formed a joint company, called European Helicopter Industries (EHI), to manage the project in June 1980. The project definition phase was launched in June 1981. As the design evolved, it became clear that there was a significant market for a medium-sized commercial helicopter and also a military tactical transport helicopter. Only relatively small changes in the airframe of the basic naval helicopter would be required to produce variants to satisfy these markets.

On 7 March 1984 the official contract for the full-scale development of the Naval variant was signed. The civil transport and utility transport variants were launched simultaneously as private ventures. A total of ten pre-production examples were planned, including one non-flying airframe for ground testing.

Manufacture of the first components began during March 1985 at Yeovil and at Cascina Costa near Milan. The first prototype, PP1 (ZF641), was rolled out at Yeovil on 7 April 1987. After exhaustive ground testing, the first flight was achieved on 9 October 1987. This was quickly followed by the second pre-production example, PP2, flying at Cascina Costa on 26 November 1987.

The first four pre-production aircraft, PP1-PP4, were used for basic development in the flight test programme; PP5 and PP6 were used for development of the RN and MMI naval variants respectively; PP7, the utility variant, was used to develop the rear loading ramp and its associated systems and PP8 and PP9 flew trials for the civil and utility variants respectively. During flight testing the main-rotor pylon fairing was reshaped, and a main-rotor with anhedral tips fitted. The stubby symmetrical tailplane was also replaced by a high aspect-ratio asymmetric tailplane mounted on the starboard side of the base of the fin. Further aerodynamic refinements included rotor blade root fairings and a horizontal plate mounted on the upper port side of the rear fuselage to deflect rotor down wash.

Export prospects soon materialised. In August 1987 the Canadian government confirmed it’s selection of the EH 101 to replace the 35 ship-borne Sikorsky CH-124 Sea King ASW helicopters being flown by the CAF. In April 1988 EHI was awarded a contract to define an EH 101 to meet the specification of the New Shipborne Aircraft (NSA) programme. A consortium of Canadian companies was formed to assemble and equip the helicopters, led by IMP Group Ltd. The designation CH-148 Petrel was assigned. A subsequent order for 15 utility versions to replace the CH-113A Labrador in the SAR role under the designation CH-149 Chimo was also placed.

In April 1990 it was decided that all production EH 101s for the Royal Navy would have Rolls-Royce/Turbomeca RTM.332-1 turboshaft engines, and aircraft PP4 was later modified to conduct flight testing of this powerplant. In September 1991 a partnership of Westland and IBM Federal Systems (acting as prime contractor overseeing systems integration) was awarded a contract for 50 production versions (later reduced to 44) of the naval variant, designated Merlin HM. Mk1 by the MoD.

During 1993 the Canadian opposition Liberal party chose to make political capital out of the EH 101 procurement programme, and following a change of government in late 1993 cancelled the contract. The cancellation fees paid to EHI were higher than if the contract had gone ahead, resulting in considerable political embarrassment.

In November 1994 civil certification was achieved for the 30 seat transport and rear-ramp utility variants. Assembly of the Merlin began in early 1995 and the first example flew on 6 December 1995. The Royal Navy received it’s first fully operational Merlin HM.1 on 27 May 1997, for trials at Boscombe Down.

The CAF still needed a replacement for the CH-113A Labrador, and so in January 1998 the Canadian government placed a new order for 15 examples of the revised AW320 Cormorant version for the SAR role. This was a minimum change SAR version based on the Series 500 Civil utility variant with a rear cargo ramp. The ‘AW320’ designation was presumably politically inspired to avoid any reference to ‘EH 101’ in the announcement. (Some sources use the designation ‘AW520’).

The first commercial example, a Series 510 for the Tokyo Police was handed over in 1998. The first of 22 examples for the Royal Air Force was rolled out on 25 November 1999. Designated Merlin HC.3 and sharing the RTM.322 engines of the Royal Navy examples, the first was delivered in December 2001. In January 2001 the Italian Navy received it’s first production EH 101.

The airframe of the EH 101 is mostly conventional aluminium alloy construction with some composite materials in the rear fuselage and tail section. Overall dimensions are less than those of a Sea King, to allow operation from existing frigates and hangars. The three engines are mounted on the cabin roof in ‘arrow head’ formation. The 9 pre-production examples were fitted with General Electric CT7-2A engines of 1289 kW (1729 shp) maximum, while British military examples have RTM.322 engines of 1724 kW (2312 shp) and all others are fitted with Italian-assembled T700-GE-T6A engines of 1278 kW (1714 shp). The single five-bladed main rotor is entirely of composite construction, apart from an abrasion resistant leading edge, and uses elastomeric bearings. The blades utilise an advanced aerofoil section and high-speed BERP-derived paddle tips which significantly increase efficiency. There is a four-bladed tail rotor on the port side of the tail rotor pylon. The swept fin pylon is incided to the left, and has a high aspect ratio tailplane located at the base on the starboard side. The naval version has powered main rotor blade folding and tail rotor pylon folding. The retractable tricylce landing gear features a twin-wheel nose gear, and single-wheel main gears which retract backwards into the sponsons. All versions can fly in severe icing and incorporate triple hydraulic systems, three independent alternators and a gas turbine APU. The avionics include a digital flight control system, two MIL-STD-1553B digital databuses (ARINC 429 in civil variants), a glass cockpit with colour Multi-Function Displays and a comprehensive navigation suite for all-weather navigation and automatic flight. Italian navy versions feature the APS-784 radar and a HELRAS sonar system. Royal Navy Merlins include GEC Ferranti Blue Kestrel 360º search radar, GEC Avionics AQS-903 acoustic processing and display systems, Racal Orange Reaper ESM and Ferranti/Thomson-CSF dipping sonar.

The proven capabilities of the airframe and it’s highly advanced systems has made the EH 101 a fierce competitor in the export market. During 2001 the EH 101 won orders from Portugal and Denmark for the SAR variant and in early 2003 an order from the JMSDF for 14 examples in the mine clearance role. In Canada the prolonged search for a Sea King replacement continues after the 1993 political debacle. The EH 101 has again been submitted for consideration, but there are claims that the requirement has been rewritten to make it much harder for the EH 101 to win. It is likely that any order will be not be placed until after Jean Chrétian has retired from political life in late 2003, in an attempt to salve his worthless reputation. In the meantime, three of the 42 year-old Sea Kings have crashed. One of the competitors in the Canadian competition is the Sikorsky S-92. Despite being touted as a rival to the EH 101, the S-92 is only about two-thirds the size and is much closer in dimensions to the European NH.90 helicopter.

At the start of 2001 Agusta merged with GKN Westland to form AgustaWestland, thus eliminating the need for EHI as a joint venture company. In October 2001 AgustaWestland signed a joint marketing agreement with Lockheed Martin for the promotion of the EH 101 (dubbed the US 101) in the USA. The potential for US Military sales is considerable, with new medium-sized helicopters needed by the USAF, US Coast Guard, US Navy and Marine Corps. The latter force undertakes the enormously prestigious role of transporting the US President by helicopter. Although impeccably maintained, the VH-3Ds used by HMX-1 in this role are in need of replacement. Potential candidates include the NH-90, which is politically handicapped by it’s French and German ‘old Europe’ background; the S-92 again, which has lost every military competition it has entered (except for a distinctly dubious Irish Air Corps deal which was quickly cancelled), and the EH 101, which can offer three-engined safety, a full height cabin and the world’s most effective active vibration damping system. Furthermore, Lockheed Martin is not used to coming second in a US military aircraft competitions.

Whatever the outcome of this particular competition, the EH 101/US 101, is well placed to continue winning further orders wherever there is a need for a world-class medium-sized helicopter.