One SA.365N obtained in 1984. Replaced the Sikorsky S-76. In 1985 replaced by another of the same type, also registered TF-SIF. Primarily used for search and rescue duties, with secondary coastal patrol and EMS roles. 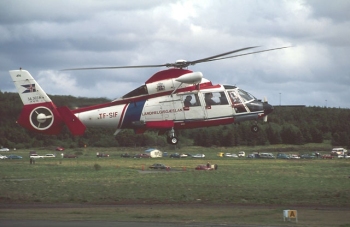 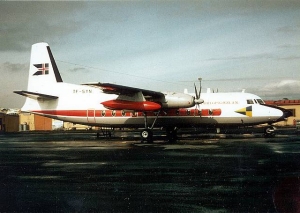 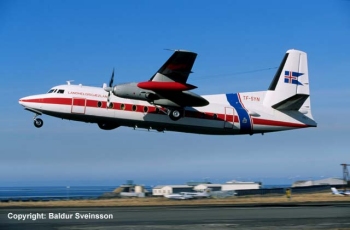 Two HU-16C’s borrowed from the US Coast Guard, January – May 1969, to replace the Catalina, but they proved very unreliable and were soon returned. One example had US Navy serial 141276. Used for fishery protection.

One S-62 (not S-62C) obtained from the US Coast Guard in 1972 – known as the HH-52A Seaguard in USCG service. Crashed and written off 3 October 1975, following an in-flight engine failure. Used for search and rescue and coastal patrol duties. 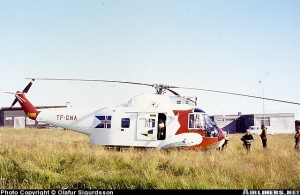 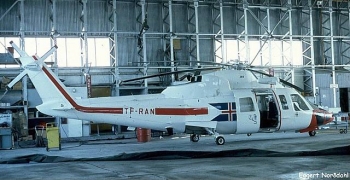 Iceland is located in the north Atlantic, just south of the Arctic Circle, and is therefore Europe’s westernmost country. It’s position on the junction between the European and North American tectonic plates results in over 200 volcanoes (many of which are still active) and numerous geysers. The entire island is composed of volcanic rock, and features a large central plateau rising to an average height of 1000 m (3,281 ft), surrounded by a lower-lying coastal fringe where most of the settlements are found. Much of the coast has been eroded into deep fjords. A plain crossed by several rivers lies in the south west corner of the island, and here the capital city, Reykjavik, is situated. Some 60% of the population live in or near Reykjavik. The total land area of Iceland is 100,250 sq km (38,707 sq miles). The population numbered 277,000 in 2000. Icelanders are an ethnically homogenous society, descended from Norwegians and Celts. 93% of the population follow the Evangelical Lutheran Church.

Text to be added on the development of aviation in Iceland.

Civil aircraft in Iceland initially (from about 1930) received the country name ISLAND and a number. The registration prefix ‘TF-‘ has been used since 1937, eg: TF-ABW. Icelandic aircraft are also required to display their individual Icelandic CAA registration number externally – usually on the tail, eg: 216.

No Police or EMS aviation.

No aircraft manufacturing other than homebuilts.

NAS Keflavik is the only military air base.

No dedicated aviation museum, but the following aircraft are preserved:

Icelandic Aviation Bibliography – to be added


Although geographically separated from Europe, Iceland has been a port of call for mariners for many centuries. The first known inhabitants were a group of Irish monks, who arrived in the 9th century AD. In 874 Iceland was settled by Norwegian Vikings, many of whom were fleeing the harsh rule of Norwegian King Harald. The Irish monks moved away when the Vikings started to arrive.

In 930 the ruling chiefs established an annual parliament called the Althing – believed to be the world’s oldest surviving political assembly. In 1000 a civil war between Pagan and Christian groups was avoided when it was decided that the whole country would convert to Christianity. Iceland remained independent until 1262, when it entered into a union with the Norwegian monarchy. This union ended a bloody clan war which had started in 1220.

In 1380 Norway and Denmark were united, and so control of Iceland passed to Denmark. When the two kingdoms separated in 1814, Denmark kept Iceland as a dependency. In the early 19th century, an independence movement developed. Denmark granted Iceland home rule in 1874 under a new constitution. A revision of the constitution in 1903 established a minister for Icelandic Affairs, who was made responsible to the Althing.

The Act of Union of 1 December 1918 recognised Iceland as a fully sovereign state united with Denmark under a common king. Iceland established it’s own flag and delegated responsibility for foreign affairs and defence to Denmark.

The German occupation of Denmark on 9 April 1940 cut communications with Iceland. The next day the Althing voted to take control of foreign affairs – adopting a policy of strict neutrality in the war. Due to it’s vital strategic position, on 10 May 1940 British military forces invaded and occupied Iceland. With no military forces, resistance was impossible and a policy of collaboration with the occupying forces was soon adopted.

Under the United States-Icelandic defence agreement of July 1941, responsibility for Iceland’s defence passed to the USA. On 17 June 1944 Iceland formally became an independent republic, following a national referendum. In October 1946 it was agreed that US responsibility for the defence of Iceland would cease, but that it would have continued access to Keflavik airfield.

Iceland became a founder member of NATO on 4 April 1949, it’s main contribution being it’s strategically important airfields. Following the outbreak of the Korean war, and growing tensions in Europe, and an agreement was signed on 5 May 1951 under which the USA resumed responsibility for Iceland’s defence.

In 1958, the unilateral extension of Iceland’s fishery limits from 4 nautical miles (7 km) to 12 nautical miles (22 km), and thereby impinging on the traditional fishing grounds of British trawlers, led to the first ‘Cod War’ with Britain. Iceland was successful in it’s claim, and in 1972 further extended it’s fishery limits to 50 nautical miles (93 km). This resulted in a second ‘Cod War’ which was resolved in 1973 by an agreement on annual catch sizes. A third and more serious ‘Cod War’ broke out in November 1975 when the 1973 agreement expired and Iceland introduced a 200 nautical mile (370 km) fishery limit. This was eventually settled diplomatically in June 1976.

‘ISMO’ appears to have been an annual publication for members of IPMS Iceland, covering various scale modelling topics. The years of publication are not known, but the 1976 issue included an illustrated feature on Icelandic Coast Guard Aviation. Ceased publication at an unknown date. One of the main contributors was aviation author Ragnar J. Ragnarsson.