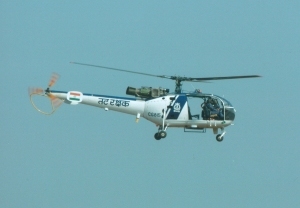 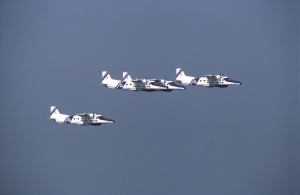 The Indian Coast Guard Extensive Flying Unit (ICGEFU) was established in March 2002 to develop operational and training procedures for the introduction into regular service of the HAL Dhruv helicopter. It is presently operating from the premises of ICGAE (Goa). The Dhruv is capable of undertaking both coastal surveillance and SAR missions. 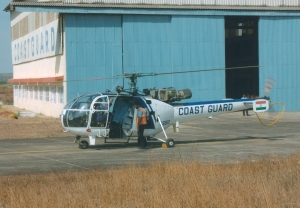 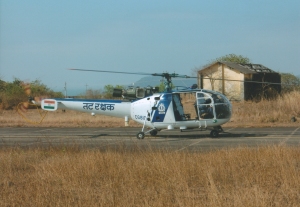 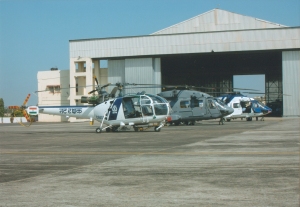 This page gives details of some of the air bases and airfields which are, or have been, used by the Indian Coast Guard Air Wing.

CGAE Kolkata
Calcutta Dum Dum is located north east of Calcutta [Kolkata] in Eastern India. It is classified as an ‘air enclave’ rather than an air station. It comes under Coast Guard District No.8, Haldia, West Bengal. It is home to 700 Squadron, who are responsible for patrolling the Bay of Bengal region.
Runway data: no information.

CGAE Goa
Goa-Dablomin (also spelled Goa-Diabolim) is located on the lower west coast, within the former Portuguese colony of Goa. It is classified as an ‘air enclave’ rather than an air station, and was first commissioned on 22 May 1982. It comes under Coast Guard District No.11, Goa. It is home to 800 Squadron, which supplies helicopters to the ICG offshore patrol vessels.
Runway data: no information.

CGAE Campbell Bay
Campbell Bay is located on the extreme southern tip of the Nicobar Islands. It is used as a transit airfield only, with no based units, and comes under Coast Guard District No.10.
Runway data: no information

CGAS Chennai
744 Squadron was initially activated on 10 April 1990 at Madras International Airport, Madras-Meenambakkah (also spelled Madras-Meenambakkam), located south of Madras [Chennai], on the lower east coast. Land was subsequently obtained from the Indian Navy for a permanent station, which was formally commissioned on 26 April 1991. It is home to 744 and 848 Squadrons, who are responsible for maritime reconnaissance and SAR coverage along the Eastern coast of India. The logistics support organisation for the Do 228 is also housed here.
Runway data: no information.

CGAE Porbandar
A new air base is being built at Porbandar Airport, State of Gujarat. It comes under Coast Guard District No.1. It will eventually house a squadron of fixed wing and rotary wing aircraft.
Runway data: no information

CGAE Port Blair
Port Blair is located in the south east of South Andaman Island. The Andaman Islands are a chain of islands in the Andaman Sea, south of Burma. It was formally commissioned as an air station circa early 1996. It is home to 745 Squadron.
Runway data: no information

CGAE Vizag (IATA: VTZ)
Vishakhapatnam Airport, Andhra Pradesh, is located mid-way up the east coast. It is classified as an ‘air enclave’ rather than an air station, being established circa 1999. It comes under Coast Guard District No.6. It is used as a staging post for Do 228s transiting between bases, and as a temporary shore base for Chetaks.
Runway data: no information

CGAE Wellington Island
Wellington Island is located on the west coast of the southern tip of India, close to the city of Cochin [Kochi]. It is classified as an ‘air enclave’ rather than an air station, being established circa 1999. It comes under Coast Guard District No.4. It is used as a staging post for Do 228s transiting between bases, and as a temporary shore base for Chetaks.
Runway data: no information