‘Aero Ireland’ was a magazine that focused on local Irish aviation news. 18 issues were published from Feb 1979 until Nov 1982, when it changed titles to ‘Aero & Microlight Flyer’. 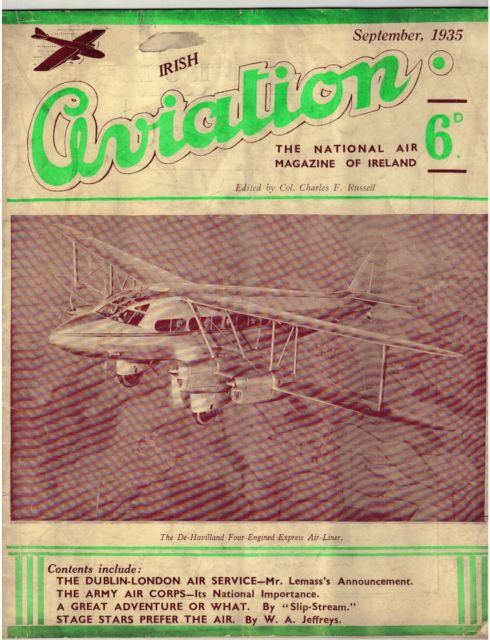 ‘Irish Aviation’ was a news magazine covering the aviation scene in Ireland. It was subtitled ‘The National Air Magazine of Ireland’. Printed in newspaper-quality paper, it featured news and articles on various aspects of Irish aviation – both civil and military. It was illustrated with b+w photographs and typically comprised 32 pages in each issue. The editor was Col. Charles F.Russell. Launched circa 1932, by late 1937 it had dropped the ‘Irish’ from the title, becoming simply ‘Aviation’.

At least nine S-61N Mk II operated at various times, 1991-present. Used search and rescue duties. The assigned operating bases were not fixed and aircraft could switch between bases to allow for scheduled maintenance of the normal resident. EI-BHO & EI-BLY were operated by Irish Helicopters under contract, the others being operated by Bond Helicopters/CHC Helicopters Ltd under contract.

Located in the Atlantic Ocean, off the west coast of Britain, the Irish state occupies some 85% of the island of Ireland. It’s only landward neighbour is Northern Ireland to the north east, which comprises part of the United Kingdom. Ireland consists of a central plain with lakes hills and peat bogs, surrounded by a broken rim of low coastal mountains. The total land area is 68,890 sq km (26,598 sq miles).
The Population of 3.6 million (2000 figure) comprises 95% of ethnic Irish origin, with 2% British and 3% other ethnic groups. Some 88% of the people are Roman Catholic, with 3% Anglican, 1% Jewish and 8% other faiths. The capital city is Dublin.

Text to be added on the development of aviation in Ireland.

Irish civil aircraft are registered in the series EI-AAA onwards from 1929.

All-time Ireland – civil aircraft register (EI-aaa EJ-aaa) [TO BE ADDED].
[Get involved with the Aeroflight Cloud.]

Irish Aviation Bibliography – to be added

Aviation Museums Ireland
Visitor data and exhibits for each location


In 1801 Ireland and Britain were formally joined under the title of the United Kingdom. After decades of agitation, a home rule bill was passed at Westminster in 1914, but suspended because of the outbreak of war. An armed uprising in Dublin on Easter Monday 1916 was put down by the British. Continuous armed conflict between 1919 and 1921 forced Britain to agree to Irish independence. On 6 December 1921 the Irish Free State was established under the British Crown, excluding the six northern counties which remained part of the UK. A civil war followed, between republicans opposed to partition and those who accepted British terms.

A new constitution was introduced in 1937, severing the remaining links with Britain and establishing the independent republic of Eire. The country remained neutral during World War II. In April 1949 a new constitution took Eire out of the Commonwealth and created the Republic of Ireland. Ireland joined the European Community (EC) in 1973. Since 1969, republican terrorist activity close to the border with Ulster (‘Northern Ireland’) has become a major security problem. The terrorists stated aim is a marxist united Ireland.

On 10 April 1998 the Belfast Agreement (‘The Good Friday Agreement’) was signed by Ireland and the United Kingdom. This agreement provides for the Irish Government to participate in certain aspects of the running of Northern Ireland. Increased prosperity due to membership of the European Union, and the implementation of the Belfast Agreement has undermined support for terrorist groups and security has improved markedly.

This is a survey of Irish aviation, defence and aircraft scale modelling magazines. All magazines are English text only, unless otherwise stated.

A monthly magazine which first went on sale on 20 May 2004. It ceased publication in January 2005. It dealt with many different Irish aviation issues and was available in Northern Ireland and the Republic of Ireland. It proved highly popular and was a well respected magazine.

‘Irish Air Letter’ is a monthly magazine covering all aspects of Irish aviation (including in the North). It appears to have started off as a spotting magazine, but later developed into more of a historical journal that includes industry news and local aircraft movements reports. It carries the subtitle The Monthly Journal of Current and Historical Irish Aviation.

An A4 size magazine. It includes a movements review for major Irish airfields/airports, historical round-ups, Irish civil register, and Irish Air Corps news together with lengthy feature articles on historical subjects. It has been publsihed since at least 1975, with the July 2009 issue being number 415. The current editor is Paul Cunniffe.