This section describes and illustrates the various national insignia used by the Royal Jordanian Air Force since its formation: 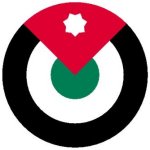 1949-present
The main marking is displayed in 6 positions (i.e. above and below each wing, and on each side of the fuselage) on aircraft – but on the fuselage sides only on helicopters. The fin flash is displayed on the tailfin. Aircraft do not carry service titles.

This page gives details of some of the aircraft types that were offered or promised to the Royal Jordanian Air Force but not delivered, cancelled official orders, and types have been falsely reported as being in service.

MBB BK-117
Three BK-117s are reported to have been in RJAF service.

Piper PA-28 Cherokee
The Cherokees were actually operated by the Royal Jordanian Air Academy, not the Air Force.

Piper PA-34 Seneca
The Senecas were actually operated by the Royal Jordanian Air Academy, not the Air Force.

Short Sealand
Six(!) of the 25 Sealands built in total are sometimes reported to have been used by the RJAF.

In July 1956 the Arab Legion was separated into distinct army and police elements. The police element was known as the Public Security Force (PSF). During the period of martial law from April 1957, the police were again placed under army control. In July 1958 the PSF was reestablished as a civilian force. The PSF reported to the Public Security Directorate of the Ministry of the Interior. A Public Security Air Wing was established in 1989, with the arrival of the first helicopters. The helicopters are flown by Air Force crews on behalf of the Police. In January 2008, Jordan set up a Gendarmerie force using various elements drawn from the Public Security Directorate, including the Air Wing. The new force comes under the control of the General Directorate of Gendarmerie (GDG).

The Air Wing is primarily involved in security and paramilitary duties.

Prior to the creation of the Gendarmerie, JPSAW helicopters displayed the PSD insignia on the fuselage sides. The national flag was carried as a fin flash. POLICE service titles were also displayed. Gendarmerie markings are not known.

The Air Wing serialling system comprises a two-figure number for each airframe, prefixed by the letter P, e.g. P-07.

All aircraft are based at Al Matar Air Base, Marka.

All helicopters are operated from Al Matar Air Base, Marka.

The King of Jordan has used transport aircraft operated by the RJAF since at least 1958. By the 1970s however, the Royal Family had started using civilian aircraft.

Jordanian Royal Flight aircraft are flown under contract to the royal family. The main operator is Royal Jordanian Airlines.

Jordanian Royal Flight aircraft fly in the colours of Royal Jordanian Airlines. The country title THE HASHEMITE KINGDOM OF JORDAN is displayed on the fuselage in English on the starboard side and in Arabic script on the port side.

The Jordanian Government has had its own aircraft, separate from the Royal Flight, since at least 1978.

Jordanian Government aircraft are flown under contract to the government by commercial airlines and business jet operators. Operators used include Arab Wings.

Jordanian Government aircraft fly in mainly white colour scheme, with a fuselage cheatline in the national colours. A golden crown appears on the fin. The country title THE HASHEMITE KINGDOM OF JORDAN is displayed on the fuselage in English on the starboard side and in Arabic script on the port side.

Most government aircraft carry civilian registrations in the JY-Axx series, although some have out-of-sequence registrations such as JY-ONE, JY-TWO etc.