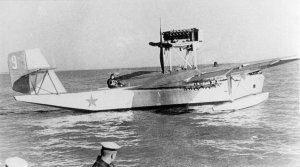 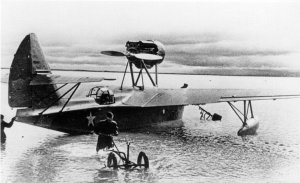 Russian seaplane development made reasonable advances during the final decade of the Tsarist government, with such types as the Grigorovitch biplanes – which were virtually copies of the Austrian Lohner flying-boat. But after the Bolshevik revolution it languished owing to the poor state of the Soviet economy. Little interest was shown until the 1920s when a requirement was issued for a reconnaissance type for use with coastal units on the Baltic and Black Seas.

The requirement was met by Georgii Mikhailovich Beriev, who at the age of 22 joined a new design bureau which was established in 1928 by a French designer, Paul-Aime Richard. The bureau was involved in developing an all-metal twin-engined twin-float seaplane, the TOM.1, sea-going torpedo aircraft of which Beriev designed most of the structural components. In 1930 Beriev left Richard to join the TsKB in Moscow where he was appointed chief designer.

By 1932 when licenced production of the Italian SIAI-Marchetti SM.62bis (MBR-4) had begun at Taganrog, Beriev had finished the design of a flying-boat which was designated MBR-2 (Morskoy Blizhnii Razvedchik) or Naval Short-Range Reconnaissance. The prototype of which had begun its flight test programme.

A shoulder wing monoplane of all wood construction (except for the metal fin & rudder) powered by a BMW VI.Z 12-cylinder water-cooled engine mounted above the centre section of the wing on ‘N’ struts and driving a four-bladed wooden airscrew in the pusher mode. The engine being rated at 730 hp at take-off and 500 hp for cruise, the aircraft attained a maximum speed of 129 mph with a ceiling of 14,436 ft. The MBR-2 possessed good hydrodynamic qualities and in 1934 entered production at Taganrog where Beriev transferred his bureau from Moscow. The type became the successor to the Italian designed S.62 which was known by the Soviets as the MBR.4.

The production version of the MBR-2 was powered by the licence built BMW known as the M-17b. Some minor modifications added extra weight to the aircraft bringing the maximum speed down to 124 mph. Maximum range was 715 miles. Armament comprised a 7.62 mm machine gun in the bows and also in a dorsal position aft of the wing and 661 lbs of bombs or mines could carried on racks under the wings.

In 1936 the MBR-2 became the standard reconnaissance flying boat of the Soviet Navy, often being fitted with alternative wheel or ski undercarriage for land operations. A commercial version was designed in 1934 as the MP-1 (Morskoy Passazhersky), which accommodated 6 passengers and a crew of 2, one of which operated on passenger routes between Odessa and Batumy. The prototype MP-1bis established various international records in May 1937 being flown by female pilot P.D. Osipenko.

The original military version was later modified by incorporating an enclosed cockpit replacing the original open version and a re-designed vertical tail surface plus the new Mikulin AM-34n engine which was rated at 830 hp and drove a 3-bladed metal airscrew.

The favourable characteristics of the MBR-2 was extremely liked by its crew and left little to be desired. It remained in service during the Second World War even though the production terminated in 1941 when more than 1,300 MBR-2s and MP-1 had been manufactured at Taganrog. The Beriev design bureau continued to develop water-borne aircraft up until today.

(served in Northern and Black Sea Fleets for recce/ASR duties trougout WW2 – and long after in fishery prostection and allied roles.

Wings Palette
* 21 col profiles of MBR-2/MP-1 aircraft, including the prototype

Scale Drawings:
Roy Tassell has a nice 1/36 scale drawing of the MBR-2.