The Pilatus PC-9C is a contemporary, well praised and versatile turboprop aircraft used by Air Forces all over the world. The aircraft is primarily used for lead-in training, surveillance, and light ground-attack.
A total of 2 aircraft were obtained from the manufacturer and delivered in 1989, and both are still in service. Both aircraft were acquired with armaments, though the type is rarely used in active combat role, as this capability is covered by helicopters.
PC-9’s began supporting the Cyprus Police and Coastguard in the early nineties.

One Bell 412SP delivered in 1989. Used for VIP transport duties. Transferred to Cyprus Police in 1992.

In 1967 the Cyprus Government acquired a single Fairchild Hiller FH-1100 helicopter for official transport and liaison purposes. It was operated by military personnel for obvious logistic reasons, and was the predecessor to the Bell-206L. Light, cheap to operate and easy to maintain. The aircraft was sold to a private buyer after its service ended, and broken up for spares sometime after 1974. 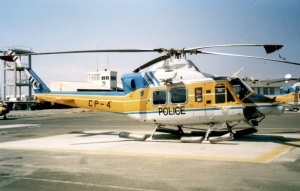