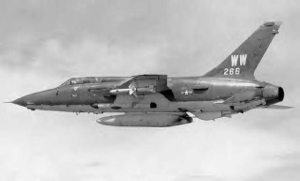 The F-105 Thunderchief or “Thud” was the first supersonic tactical fighter-Bomber to be developed as such from the outset. All other such aircraft were developments of fighter aircraft. The “Thud” was the largest single-seat fighter ever built. The F-105’s design role was nuclear strike; however, it was most famous for the part it played in the Vietnam War, using conventional weapons against the North Vietnamese.

In June 1950, the USAF asked Alexander Kartveli of the Republic Corporation to start design studies for a successor to the F-184F Thunderstreak. The primary role was to be nuclear strike with an air-to-air capability. Republic issued the initial contractor proposal to the USAF in April 1952. In October 1952 the USAF awarded Republic a contract for Pre-production engineering and tooling. The F-105 mock-up was ready by 27th October 1953. It was to be powered by the J-71 engine but that unit was deemed no to be powerful enough, so Republic decided to go for the Pratt & Whitney J-75 instead.

On 1st December 1954 the USAF issued a General Operational Requirement for the F-105, it called for a J-75 engined tactical strike aircraft with in-flight refuelling and an advanced fire control system.

Whilst the first YF-105A’s were being built, Republic heard of the problems suffered by Convair’s YF-102 in that they had mis-calculated its speed. (It could not fly supersonic in level flight). Convair engineers found that if the fuselage cross section was “waisted” it would reduce the drag. The first YF-105A was rolled out in the autumn of 1955, and the first flight was on 22nd October 1955.

The F-105B was the initial production version; it differed from the YF-105A in having swept forward air intakes, a larger vertical tail incorporating a ram-air duct in the base. The first YF-105B flew on 26th May 1956 and the first production F-105B flew on 14th May 1957. The F-105B had the MA-8 fire control system, which included an E-50 sighting system operating in conjunction with an E-34 radar ranging gunsight and an E-30 bomb computer.

‘Republic F-105 Thunderchief – Osprey Combat Aircraft Series’ [Order this book from Amazon UK]
by David A. Anderton
Published by Osprey Publishing, 31 Nov 1983 ISBN: 0 85045 530 8
* Detailed examination of all versions and their operational use.

‘The Republic F-105 Thunderchief: Wing and Squadron Histories’ [Order this book from Amazon UK]
by James Greer
Published by Schiffer Publishing Ltd, Oct 2002 ISBN: 0 764316 68 0
* Comprehensive history of all units that flew the F-105.