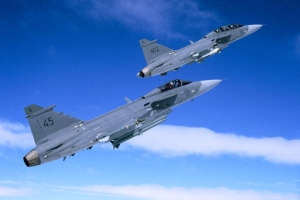 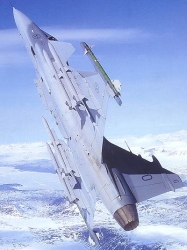 Since World War 2, the quality of Swedish engineering has become world renowned. Nowhere is this quality more evident than in the successive generations of thoroughbred fighters produced by Saab which began in 1948 with the J 29 ‘Tunnan’ and continues today with the JAS 39 Gripen. The Gripen now competes in the export market against the best combat aircraft from Europe, the USA and Russia and has proved to be a very attractive solution for many air forces.

The Saab JAS 39 Gripen came into being at one of the lowest points in the modern history of Swedish aerospace development. Between 1976 and 1979 Saab, (the only military aircraft manufacturer in Sweden), was working on the design of a projected subsonic light attack and trainer aircraft with the company designation B3LA. Intended to replace the Sk 60, the B3LA was similar in concept to the Italian AMX aircraft, but in February 1979 the programme was suddenly cancelled by the newly elected Swedish government as too expensive. At a stroke, this left Saab without any work other than a Viggen update programme.

Throughout the remaining months of 1979 the Swedish Air Force carried out a thorough re-examination its future equipment requirements, and concluded that the only affordable option was the development of a single combat aircraft which combined the roles of Jakt (fighter), Attack (attack) and Spaning (reconnaissance) in one airframe, the JAS Project. The new aircraft could replace both the Draken and Viggen using a swing-role capability which would allow it to be configured for a specific mission at the flick of a switch. It was anticipated that forthcoming advances in avionics would allow a small single-engined high-performance aircraft to fulfill all these roles successfully.

In March 1980 the Government endorsed the Air Force’s plan, but insisted that foreign manufacturers be allowed to bid for the contract. In response the Swedish aircraft industry formed a special group, the JAS Industry Group comprising Saab-Scania, Volvo-Flygmotor, Ericsson Radio Systems and FFV to manage the Swedish industry bid. A formal request for proposals was issued in early 1981, and the JAS Industry Group (IG JAS) response – centred around a design called the Saab 2110 – was submitted on 1 June the same year. After evaluating rival bids, FMV (Forsvarets Materialverk – Swedish Defence Material Agency) concluded that the Swedish proposal fully met it’s requirements. On 30 June 1982 a fixed-price contract as signed between the FMV and IG JAS for 5 prototypes and 30 initial production Batch 1 aircraft to be designated JAS 39A. In September 1982 the name Gripen (Griffin) was selected for the aircraft.

The design evolved by Saab for the JAS 39 Gripen incorporates many advanced features. The Gripen is a single-seat (or two-seat), single-engined, fly-by-wire, delta-winged aircraft with a close-coupled all-flying canard. It is designed to operate from Sweden’s network of BAS 90 dispersed roadstrip airfields with the minimum of support. To minimise weight, almost thirty per cent of the structure is carbon-fibre composite. The engine chosen is the proven General Electric F404-400, similar to that used on the F/A-18, fed by fixed rectangular side intakes. It is assembled by Volvo Flygmotor under the designation RM12. The engine is fitted with a new Volvo/GE designed afterburner to give the Gripen all-altitude supersonic performance. Unlike the Viggen there is no thrust reverser, as short-field landing performance is achieved by rotating the canard through almost 90 degrees to aid aerodynamic braking. The triplex digital fly-by-wire (FBW) flight control system controls the aircraft through two canards, the leading edge flaps and four elevon control surfaces. Saab claims the Gripen is the first inherently unstable canard fighter to enter production.

Ericsson was tasked with developing a new small multi-mode radar for the Gripen, the PS-05, while FFV developed the nav/attack systems. The cockpit originally featured three Ericsson EP-17 monochrome multi-function displays, and a wide-angle holographic Head-Up Display. HOTAS controls allow many cockpit functions to be selected without the pilot’s hands leaving the control stick or throttle. The Martin Baker S10LS zero-zero ejection seat provided is a break with the previous tradition of using Saab-designed seats.

Saab unveiled a mock-up of the final Gripen design in early 1986. Development of the Flight Control System (FCS) proved problematic and caused delays in finalising the assembly of the first aircraft. Finally, on 26 April 1987, JAS 39-1 was rolled out at Linköping. The first flight was achieved on 9 December 1988, but a major setback occurred not long afterwards. Following the sixth flight of JAS 39-1 on 2 February 1989, the aircraft veered off the runway and cartwheeled – fortunately the pilot was unhurt. The cause was found to be flaws in the pitch control routine of the FCS software. Calspan in the USA used a modified T-33 to prove the required software corrections. After 15 months delay, the second prototype JAS 39-2 flew on 4 May 1990 with the new FCS software. Three more prototypes followed, the fifth and last flying on 23 October 1991. Flight testing showed drag to be 10% lower than predicted, and airfield performance was better than specified. In June 1992 the follow-on contract for Batch 2 aircraft was approved.

The four prototypes were joined by the first production Gripen (39-101) on 4 March 1993, upon its maiden flight. The second production aircraft was delivered to the FMV for service testing on 8 June 1993. However, the Gripen’s problems were not over, and on 18 August 1993, 39-102 crashed during an air display over Stockholm after the pilot had lost control and ejected. A further revision of the FCS software was required, and this caused flight testing to be suspended until 29 December 1993 when the necessary software updates were available.

One JAS 39A aircraft from Batch 1 was converted on the production line to be the prototype for the JAS 39B two-seat operational trainer version. Featuring a 65.5 cm (28.8 in) fuselage stretch, the rear cockpit is the same as the front, except for the absence of a HUD. This aircraft was first rolled out on 29 September 1995 at Linköping, and made it’s maiden flight on 29 April 1996. Deliveries of JAS 39A aircraft to service unit began on 9 June 1996 with the first aircraft being formally handed over to 2 Divisionen (the 2nd squadron) of F7 wing at Såtenäs. After a comprehensive work-up the unit became officially operational on 1 November 1997. On 1 January 1999, F7’s other Division became the second operational Gripen unit. The next wing to convert was F10 wing at Ängelholm, but after a change of plans F10’s aircraft were transferred to F17 wing at Ronneby and F10 was disbanded. The next unit to convert was F21 wing at Luleå and this will be followed by F4 wing at Östersund in 2005, giving a total of 8 squadrons.

In any BVR (Beyond Visual Range) combat, the Gripen has a key advantage with it’s TIDLS (Tactical Information Data Link System). Supplied by Celcius AB, TIDLS allows each aircraft in a Gripen formation to constantly share sensor and radar data with the others via a secure jam-proof digital radio network. An air-to-ground connection also allows mission data to be updated in real time or downloaded to a ground station. Such a capability considerably enhances the situational awareness of each pilot and thus improves his or her chances of winning the fight.

On 12 June 1995, at the Paris Airshow, Saab and British Aerospace (now BAE SYSTEMS) announced a joint venture to develop and market the Gripen on the export market. This agreement was formalised in November 1995 with the establishment of a joint venture company. In 2001 the joint venture was registered in Sweden as Gripen International. The task of modifying a design produced solely to satisfy Swedish requirements into a product which was attractive to the export market resulted in a derivative referred to as the Export Baseline Standard. Much of the design work was carried out at BAe’s Brough factory in East Yorkshire. Aircraft equipped to the Export Baseline Standard (EBS) are semi-officially designated JAS 39C (or JAS 39D for the two-seater). Since the EBS equipment standard is significantly superior to the JAS 39A/B version, the Swedish Air Force was keen to acquire this version. Accordingly, the last 20 aircraft of Batch 2 and all aircraft of Batch 3 will be to the EBS.

An early success of the joint venture occurred when a contract was signed by South Africa on 3 December 1999 for 9 two-seat and 19 single-seat Gripen based on the JAS 39C/D configuration. Deliveries are scheduled from August 2006 to 2012, to replace the SAAF’s Cheetah Cs. A further success was achieved when Hungary announced on 10 September 2001 its intention to lease 14 Gripens from Sweden. Initial discussions focused on the JAS 39A/B variant, but on 3 February 2003 this was formally changed to the JAS 39C/D version, with deliveries commencing in early 2006. The lease will last for ten years, after which Hungary intends to purchase the aircraft.

The Czech Republic selected the Gripen as it’s future fighter on 10 December 2001, but a formal contract had to be delayed after extensive flood damage throughout the country in mid Agust 2002 forced a short-term change in priorities. On 12 December 2003 the Czechs announced an intention to sign a contract for 14 JAS 39C/D Gripens in a lease deal similar to the Hungarian contract. When the first aircraft is delivered in May 2005, the Czech Republic will become the first NATO operator of the Gripen.

Gripen came a close second to the F-16 in Poland, but was unable to overcome a specially tailored financial package and heavy political pressure from the US government. A hotly tipped sale to Austria was missed when the Austrian government decided to maximise the economic benefits of using the same fighter aircraft as neighbouring Germany – the Eurofighter Typhoon. Despite these setbacks, the prospects for future exports still looks extremely good. Several countries require a replacement for ageing MiG-21, Mirage or F-5 aircraft and the Gripen is ideal for this role.

If the B3LA had not been cancelled in 1979, the Swedish Air Force would now be operating a foreign (probably US) fighter and a handful of B3LAs instead of the Gripen. After a troubled development programme the JAS 39 Gripen has matured into a formidable combat aircraft. It is an affordable, lightweight, multi-role fighter which incorporates the latest in datalink network technology, to ensure that it operates with maximum effectiveness in the air. On the ground it requires far fewer technicians to service and support it than contemporary aircraft and this ensures that operating costs are minimised. Far more than a ‘Swedish F-16’, the Gripen has the makings of a classic fighter.

‘Saab Gripen, the Nordic Myth’ [Order this book from Amazon UK]
by Hugh Harkins, Siobhan McCann (ed.)
Published by Centurion Publishing, 24 July 2000 ISBN: 1 9036 30002
* No information available on the contents of this title.

‘Saab Aircraft since 1937’ [Order this book from Amazon UK]
by Hans G Andersson
Published by Putnam Aeronautical Books, 1989 ISBN: 0 85177 831 3
* History of Saab aircraft, including a chapter on the Gripen.

Saab JAS 39 Gripen
(Photographic walk-around of a JAS 39B)