This page lists all the aviation units of the South African Air Force, since its formation.

This page gives details of the aircraft types that were offered or promised to the South African Air Force, but not delivered, cancelled official orders, and types have been falsely reported as being in service.

de HAvilland Vampire FB.9
Thirty FB.9s have ben reported in SAAF service, but this is due to confusion with the FB.52 version actually delivered. The FB.52 was the export verison of the FB.9 with some minor modifications.

Supermarine Spitfire XV
The Spitfire XV or Spitfire 15 does not exist, as this mark number was allocated to the Seafire naval version. The SAAF did not operate Seafires.

Vickers Victoria
Six have been reported in service, but this was probably due to confusion with the very similar Vickers Valentia.

Vickers Vimy
Two have been reported in service in 1920, but this is probably associated with the van Ryneveld and Brand attempt to make the first England to South Africa flight in 1920. Two Vickers Vimy’s were damaged in the attempt, but neither was taken into SAAF service.

Vickers Vincent/Vildebeest
Although it has an Afrikaans name, the Vildebeest was only used by the RAF and RNZAF. The very similar Vincent also never saw service in South Africa.

Vickers Wellington III, VIII, XII and XIII
These versions of the Wellington bomber were not used by 17, 26 and 28 Sqns SAAF. The versions used were Mark X and XI.

Westland Scout
One Westland Scout helicopter was obtained from the Bahrain Police in 1976 for Wasp gearbox testing. It was not flown in SAAF service.

Westland Wapiti IIA
The SAAF actually only used the Wapiti IB and III variants. The Mark III was based on the IIA variant produced for the RAF, but no IIAs reached South Africa.

Details to be added.

Text to be added on the development of aviation in South Africa.

In the British colonial era civil aircraft based in South Africa used the registration sequence G-UAAA to G-UZZZ, 1919-1929. From 1929 the sequence ZS-xxx was adopted and is still used. 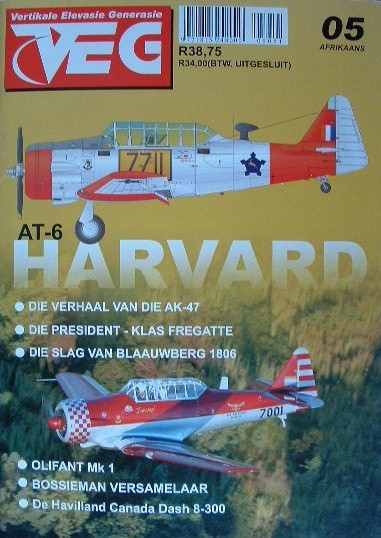 ‘V.E.G – Vertically Elevated Generation’ was a general magazine covering a wide range of military and technical subjects. Available in English and Afrikaans (as ‘V.E.G – Vertikale Elevasie Generasie’) editions, it was regarded as one of the best reference magazines available.

The feature articles covered many South African-related topics, from Armour, to SAAF, SADF, civil planes, Boer War, Uniforms, railway locomotives, the Navy and many more subjects. The illustrations were top notch, with detailed pictures, large colour drawings and scale illustrations. There were about 60 pages in each issue, with full colour illustrations on nearly every page. Unfortunately, only 8 issues were produced in total.

No digital versions of this magazine appear to be available.

‘Air Heritage’ is the official magazine of the Society of Friends of the SAAF Museum. Published annually, it reviews the changes at the various branches of the museum, and the activities of the Friends in supporting the museum and maintaining its exhibits.

Their are Friends branches at Cape Town, Port Elizabeth and Pretoria. The Friends previously published a quarterly(?) magazine called ‘The Stringbag’, which appeared during 2006 at least.