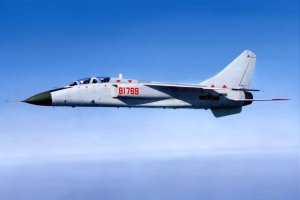 Although largely equipped with licensed and unlicensed copies of Russian aircraft designs, the Chinese People’s Liberation Army Air Force (PLAAF) and Navy Air Force (PLANAF) do operate a growing number of indigenously designed aircraft types. For the Chinese Navy the most important of these indigenous designs is the Xian JH-7. A large twin-engined fighter-bomber, the JH-7 is designed for long-range anti-shipping missions and represents a significant upgrade in China’s naval air power compared to previous aircraft.

The JH-7 originated in a requirement issued in 1973 by the PLAAF for a new aircraft to replace the Harbin H-5 (Ilyushin Il-28 copy) – which was then the mainstay of all Chinese medium bomber units. Operational analysis showed that the new aircraft needed to possess long range and be able to fly at low altitudes at near sonic speeds in all weathers and at night, and would need a dedicated Weapons System Operator on-board to handle the final attack phase of the mission. Hence the requirement called for a fast two-seater fighter-bomber similar in concept to the F-111 or Su-24. The PLANAF also showed interest in applying the type to the anti-shipping role.

The task of fulfilling this ambitious objective was placed with the Xian Aircraft Factory, which was at the time busy with the H-6 (Tupolev Tu-16 copy), and therefore had some experience with bomber aircraft. The project was initially given the designation H-7 (where H for Hongzhaji = Bomber), but later in the programme this was amended to JH-7 (Jianjiji-Hongzhaji = Fighter-Bomber). To design the new aircraft from scratch, Xian went up a very steep learning curve, and inevitably encountered numerous problems along the way. One of the less obvious ones being the devastation caused to the Chinese aerospace industry by the Cultural Revolution, which frowned in technical skills such as engineering. However, the death of Chairman Mao in 1976 gradually saw a return to sanity.

Xian’s final design bore a broad resemblance to the SEPECAT Jaguar or JUROM IAR-93 Orao, although it is much larger than either, about the size of a F-4 Phantom. The high-wing configuration is ideal for its primary mission of low-level attack. The wing is swept and tapered with pronounced anhedral and features large trailing-edge flaps, but no leading edge devices. An aerodynamic fence is located at roughly 2/3 of span. The fuselage is relatively square-cornered, like a Tornado, and is waisted at the wing junction. The two crew sit in a tandem cockpit with individual canopies, ahead of simple fixed engine intakes. The rough-field undercarriage, with twin main wheels and trailing-link oleos, is clearly inspired by the units on the Jaguar. A swept vertical tail, and deep fixed ventral fin provide lateral stability, while the tailplane is all-moving.

The engine chosen was the Rolls-Royce Spey turbofan, successfully used in the West on the Buccaneer, F-4K/M Phantom and A-7 Corsair. In 1975 an agreement was signed with Rolls-Royce for the co-production of the Spey as the WS9. The Spey represented a new generation of engine technology compared to the Russian-derived powerplants then available in China. A trial production batch of the WS9 began in 1976. Production of the engine is reported to have continued, even though slippages in the JH-7 development programme meant that there weren’t any aircraft to take them yet. Rolls-Royce also provided 50 Spey Mk.202 engines as ‘patterns’.

The first JH-7 prototype (coded 081) was rolled out in August 1988 and made it’s first flight on 14 December 1988. This aircraft first went supersonic on 17 November 1989. It is reported that a total of five prototypes were built (coded 081 to 085), and that one aircraft (possibly 082) was lost in a fatal crash during flight testing in 1994, due to engine failure. Numerous problems with the Chinese-built engines seem to have resulted in the original British-built engines being substituted, after the aircraft was grounded several times. By this time, the protracted design phase and technical problems experienced during testing had caused the PLAAF to lose interest in the design, and in 1991 it placed an order for Su-27s instead.

The prototypes were followed by a pre-production development batch of 20 aircraft, which entered service with the PLANAF in 1994. These aircraft were used for air-surface missile firing trials, bombing accuracy exercises and other operational test flying. A production batch of about 35 aircraft was subsequently produced and these went on to equip the 16th Bomber Regiment of the PLANAF at Shanghai in the anti-shipping strike/attack role. In operational service the aircraft carries a typical weapon payload of two YJ-81K/C-801K anti-ship cruise missiles, similar in performance to the Exocet or Kormoran, plus two PL-5B air-to-air for self-defence. The Su-27 is not compatible with Chinese-designed missiles such as the C-801K and this was probably a key factor in keeping the programme alive.

The JH-7 was assigned the ASCC code-name ‘Flounder’ circa 1998 – displaying a previously unknown sense of humour, as in English Flounder is both the name of a fish (indicating a naval aircraft) and means ‘to move clumsily or act ineffectually’, offering a coded comment on the protracted development timescales of the type.

In the meantime, Xian was looking at the further development of the type. By 1998 a dedicated electronic warfare variant was reportedly under development, with a Radar Warning Receiver and underwing ECM jamming and ELINT pods, like the F/A-18G. If armed with the Russian KH-31P anti-radiation missile it could also attack enemy emitters. Another proposed variant was designated JH-7 II and featured more powerful engines such as the SNECMA M53-P2 or Lyulka-Saturn AL-31F (as used on the Su-27) in an attempt to overcome the previously mentioned engine problems and get more thrust. In the event, the idea of re-engining was abandoned in 2000 as too radical a change.

Two variants that did emerge were the FBC-1 ‘Flying Leopard’ and the JH-7A. The former was a proposed commercial export version of the JH-7, with customer specified avionics and weapons. It was suggested that these could include a new JL-10 radar, helmet mounted sighting system and a glass cockpit. Integration with the Russian R-73 and R-74 missiles was offered, together with external navigation and FLIR/laser targeting pods. The third prototype, coded 083, performed at AirShow China in November 1998 as a demonstrator for this version, although it is not thought that the proposed systems enhancements were actually fitted to this airframe.

The JH-7A, on the other hand, was far more successful. It began as a response to the many technical problems experienced during development and initial service trials, and features a more advanced avionics fit and expanded weapons capability, based on both Russian and Chinese technology. The improvements include a revised fly-by-wire flight control system, new multi-mode JL-10A PD fire control radar, new ‘glass’ digital cockpit with multi-functional displays, and 11 stores stations instead of seven to carry missiles, rockets and laser-guided bombs. The airframe was also cleaned up, with the introduction of a single-piece wrap-around cockpit windshield, deletion of the wing fences, replacement of the single ventral fin with a pair of fins and the incorporation of a substantial amount of composite materials to reduce weight. Chinese-built WS-9 engines are fitted in place of the Rolls-Royce originals used in the JH-7 – the XAE engineers having done a considerable amount of work to get the engines flight-worthy and reliable. Despite being relatively underpowered, these engines have logistical compatibility with the existing JH-7 fleet, and appear to work best at low altitude, where the JH-7 excels.

Design development was completed in May 2002 and two prototypes were built, with the first flying on 1 July 2002. The type entered PLANAF and PLAAF service in late 2004. In PLAAF service the aircraft can carry the Russian AS-17 air-to-surface missile and the Russian KAB-500 laser-guided bomb, as well as the Russian KH-31P anti-radiation missile.

While the JH-7 and JH-7A radars have a terrain following capability, the carriage of external Navigation/Targeting pods now allow the aircraft to flow as low as 60 m at 900 km/h in all weathers and at night. As well as an essential over-land capability, low level strike is a key element of anti-ship operations. Ship-borne radars can only detect low level aircraft out to about 40 km due to the curvature of the earth, hence the ability of the JH-7 to carry current and next-generation supersonic attack and stand-off cruise missiles is highly significant. For the PLAAF, traditionally weak in the interdictor strike role, the JH-7 represents a welcome boost to front-line capability, while the PLANAF, for a long time reliant of obsolescent types, now has a real long-range maritime strike weapon.

Although derided by many Western analysts as antiquated and not much better than a F-4 Phantom, the JH-7 programme continues to gather pace. As a strategic programme for the Chinese aircraft industry, it is clearly necessary to gain the skills and technology involved in developing world-class strike aircraft, which can’t be gained by just building foreign designs. As China gradually moves towards becoming a the worlds’ number one super-power in the 21st century, it is becoming increasingly aware of the need to protect the vital shipping lanes that carry it’s goods to the rest of the world. The introduction of improved avionics and new weapons has further enhanced the capability of the JH-7 and it now presents a formidable threat to enemy forces on land and at sea.

The page features photographs of the JH-7As in service with the 82nd Regiment, 28th Division of the PLAAF at Jianqiao in the Nanjing Military Region. 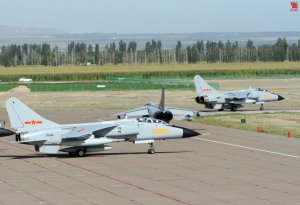