When Adolf Hitler plunged Germany into the Second Word War he envisioned a short raging contest. Never in his dream had he envisioned a prolonged and straining four year struggle, but by 1942 he was exactly in the middle of his “struggle”. In order to chance the tide of the war, the German leader ordered the design and development of very advance weapon systems. By this time, many civilian initiated, dual-purposes projects were underway in Germany. Chief among them were the V (for Vengeance) weapons platforms. The first of those systems, the V-1 or “Buzz Bomb” was able to bring terror into the heart of London. The V-1, which was essentially the first rudimentary cruise missile, was easy to design and built in large quantities. Next in line came the famous V-2 rocket. There were several variants of this impressive missile system. The more impressive one was the forth generation variant known simply as the A4 rocket. The A4 was the first truly military-controlled missile developed system. In short, the A4 was the world’s first ballistic missile. It was 46′-0″ en length with a circular diameter of 5′-5″. On the base of the rocket, four fins, with a span of 11′-8″ gave stability to the platform. Prior to fueling, the A4 weight it at 8818 lbs. The A4 was able to carry an impressive 1654 lbs warhead. Fully loaded, the rocket weight it at 28440 lbs. The fuel use to power this massive rocket was a combination of alcohol and liquid oxygen that consume itself at a rate of 280 pound per second. This rate of consumption gave the A4 only 65 seconds of power flight. But by the time its fuel had ran out, the A4 was traveling faster than the speed of sound. Operational range for this rocket was an astonishing 220 miles.

The first A4 was launched on the morning of June 13th 1942 from test Stand Number 7 at Germany’s main rocket research facility on Peenemunde. The launch, which was viewed by the Luftwaffe top brass, was successfully. The rocket cleared the launching tower without any problems. If the liftoff was successful, the flight trajectory was not. After reaching the dense cloud formation above the Baltic coast, the rocket exploded in an impressive manner. Nevertheless, the test had proven the feasibility of the A4’s design. Further test were made and, on the afternoon of October 3rd 1942, the A4 made its first successfully launch and flight. The rocket achieved an altitude of nearly 50 miles above Earth and landed more than 120 miles outside the Test Stand area. After less than ten test sets, the A4 was deemed operational by the Nazis and on September 6th 1944, two of these extraordinary rockets were fired at Paris. Within a matter of days, A4s were been fired at London and the important Belgian port city of Antwerp. It is believed that in the later stages of the war, Germany developed over 5,000 V2-class weapons, firing above 1,000 of them towards the English capital. 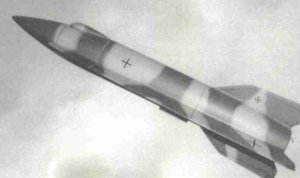 Artist’s impression of the A9. (photo, via author)

As a weapon of terror, the A4 had its use, but it was far too rudimentary to affect positions on the strategic battlefield. A new kind of missiles was needed. Range and payload became Germany’s obsession when it came to its rocket program. Thus the development of Germany’s next ballistic rocket was centered on those two factors. The new A9 missile was basically a winged version of the current A4 platform. Engineers at Peenemunde found that once a rocket reached its top altitude and exhausted its fuel, it will plummet toward the ground with out many in-flight corrections. But, adding wings to a streamline body will enable the A9 to “glide” to its intended target area. Beside a flight pattern correction, the installation of wings on the bottoms of the missile will give the rocket a much better opportunity to explode above its target instead plummeting hard to the ground as the A4 did. When a missile hit hard the ground, the proceeding explosion is mostly absorbed by it. If the missile could glide to its target instead of plummeting on it, it would hit it more softly causing a bigger explosion effect. When conceived, the A9 blue prints closely resemble that of the A4. It had basically the same frame length and diameter dimensions. The idea of adding the wings, first proposed by designer Kurt Patt during the A4 program; was first viewed as too radical for the A9’s engineers, but as the program progressed, those wing structures were viewed as stabilizing and controlling mechanism. Beside the controlling aspects of the wings, designers estimated that these structures could actually double the rocket’s operational range. As promising as the A9 program was, it was not one of Germany’s top projects until the Allied landings on Normandy. With the Allied armies in northern Europe, London was now out of the A4 range. Thus on the summer of 1944, the German High Command ordered the A9 to full production status despite the fact that the rocket’s new engine system was not fully tested. Clinging to the faint hope of knocking the British out of the war, Hitler ordered massive A4 and 9 attacks on London and its nearby cities and towns. The decision of the Fuehrer basically ended any hope German had of developing a real Inter Continental Ballistic Missile.

On July 1941, Field Marshall Walther von Brauchitsch, Germany’s Army Commander in Chief, suggested to Hitler and the Nazi top brass that the developing of a functional and advance rocket program would give a moral boots to the German people. He also, vaguely, mentioned that Germany should place resources into developing a missile capable of reaching the United States. There are some rumors that Peenemunde’s to secret Projects Office commenced designing a missile capable of achieving long distances. The project, which some had called the “American Rocket” it was rumored to had began in late 1940. The American Rocket was the brainchild of Ludwig Roth, a brilliant, yet obscure German designer; who began looking at the feasibility of installing an A9 missile on top of a massive booster rocket. The concept, now designated A10, was deemed to technically challenge by most German engineers. The A10 program was called off soon after. If developed, Roth’s massive rocket would have an engine capable of giving it almost 200 pounds of thrust for around sixty seconds this would had enable the mounting A9 rocket to reach an altitude of 35 miles. It was estimated the returning A9 could have cover a range of 2,500 miles in just thirty five minutes.

After the A10 program was terminated, there were discussions of developing a manned version of the A9 system. Engineers believed that a manned rocket would have solved the main problem of guiding the rocket to its target. There were even “talk” that a manned A9 with an A10 booster can actually hit small targets such as the Empire State Building. The idea was that once the A9 was in clear sight of its target, the pilot would have bailed out and the rocket would have self-guided to the intended area. Although the project looked promising on the drawing board, it never made it out of it. In fact, all work relating to the A10 booster rocket was terminated in the spring of 1944. Work on the winged A9 proceeded at much slower peace. The A9 project was cancelled in the autumn of 1944 because of material and fuel shortages. Although halted, the A9 and A10 projects did provide Germany with the necessary data from which to further develop its operational missile, the A4. A winged version of the A4 with a new and improved propulsion system, code named A4b, was developed. Unfortunately for Germany, the Red Army was closing fast on Peenemunde and all work related to this program was hastily suspended in late 1944.

If Nazi Germany would had employed the resources needed to configuration A10 booster with an A9 rocket, there is little question that Hitler would have had the world’s first true Inter Continental Ballistic Missile. The extent of German research and development of a true ICBM can better be explained by Wernher von Braun, the brilliant German scientist who led the American effort to reach the moon. When interrogated after the war, von Braun explained that German engineers were commencing the design of a new booster rocket, code named the A10, which would have been a three stage, extremely long range ballistic missile. In fact, he described the A10 as the first moon rocket, meaning that it was intended to get the A9 missile over Earth’s atmosphere. How close Nazi Germany came to actually develop a workable ICBM is anybody’s guess, but the sheer volumes of data clearly point to a massive German effort to develop such a weapon. One could guess that if Hitler and his staff had pressed the rocket program early on the war, what could that program have delivered?