During its brief history as a nation, Israel had fought many of the most savage battles in history. In all, although some at great cost, they had defeated its enemies. One of those brutal battles occurred in the summer of 1982. During most of the 1980s, the state of Lebanon was marred in a bloody civil war. Aside the parties involved in that civil war, Lebanon was the host of the Palestinian Liberation Organization (PLO), a group dedicated to the creation of a Palestinian state on what is now Israel. To accomplish that lofty goal, the PLO employed terroristic tactics. During most of the early months of 1982, PLO guerillas attacked Israeli settlements inside Israel northern border. As the attacks mounted, they were heavy pressured inside the Israeli political and military establishment to respond in force to the attacks.

As the political leaders debated inside Israel, Syria decided to move its forces inside the Lebanon in order to achieve power via a proxy government. The Syrian incursion in Lebanon activated the Israeli Defense Force (IDF) which responded in kind to the attack. By June, the IDF Air Force component fought some of the most brutal air battles in the annals of military history. On June 4th 1982, a group of IDF’s F-4 Phantoms and A-4 Skyhawks streaked over Beirut and proceeded to bomb suspected PLO camps inside Lebanon’s capital. The attack lasted almost 90 minutes without much anti-aircraft fire. But the next attack envelop, which was assigned to attack PLO targets near Beirut’s coastline, did encountered heavy anti aircraft fire. During the attack an IDF’s A-4 Phantom, piloted by Aharon Ahiaz, and was downed by a Soviet-built SA7 shoulder fire missile. 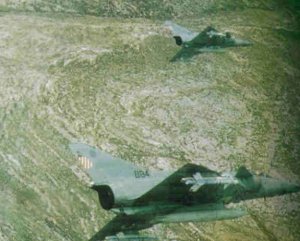 Meanwhile, the Syrian air force showed up in force on the afternoon of June 7th with a squadron of Mig-21 Fishbeds. The IDF, flying the advance F-16 Falcons, did not have any trouble downing two of the Syrian Migs. At the same time, the IDF ground forces element began to airlift heavy equipment into the mountains southeast of the Lebanese capital. The incursion of this heavy Israeli troop element directly threatened the Syrian position in the all important Bekaa Valley. The Syrians wasted no time in attacking, with Gazelles helicopters gunships, attacking the newly established Israeli position to no avail. The surprising Syrian air response and sub sequential attack put the Israeli war plan in a state of flux. Israeli military leaders now realized that in order to wipeout most of the PLO camps, they needed to neutralize the Syrian threat. By Jun 4th, Syria had placed 19 surface-to-air missile (SAM) batteries along the Valley.

On the morning of June 9th, the IDF launched a massive air strike aimed at those SAMs sites. With an air envelope of 90 aircraft, including A-4 and F-4 armed with the advance AGM65 Maverick and Anti-Radiation missiles the IDF destroyed completely fifteen sites and seriously damaged two more. As the same time the Phantoms and Skyhawks were striking the SAM sites, IDF’s F-16 and F-15 Eagles were destroying the bulk of the Syrian air force. In just 60 minutes, F-15s and 16s destroyed 22 Migs 21s and 23s, and severely damaged seven more. Israeli air dominance over Syria was now completed. 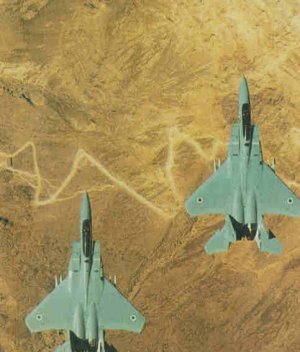 When the battle ended, the IDF claimed forty downed Mig 21s and 23s. More impressive is the fact that only 37 F-15 downed such a high number of enemy aircraft. Meanwhile, 72 IDF’s F-16 Falcons downed forty four Syrian Migs. The overall size of the Israeli Air Force rout of its Syrian counter part put an end to any Arab state intention of militarily destroying the Jewish state for the foreseeable future.