There are few fighters that capture the imagination in the same way that the F-15 Eagle does. Almost all the pilots who flew the Eagles in peace and in war, acknowledge that it was a completely ‘different beast’. Its handling capability and its sheer power will be difficult to duplicate in a platform-era bases. To resume, the F-15 will most likely end up in history as the most feared and respected fighter of all time.

The Eagles had been guarding the peace now for more than a quarter of a century. It forms the backbone of, not only the United States Air Force, but most of the Allies, air dominance capability. The majestic ‘Bird’ has also been a fixture on NASA’s flying circles since the mid 1970s. The National Air and Space Administration had and still operate a small fleet of modified F-15s most of them for experimental purposes.

The first F-15 operated by the Administration was serial number 71-0281. The unit was utilized in December 1975 to test the thermal tiles implemented on the Shuttle program. The unit was sent back to the USAF in the spring of 1983. Sample 74-0141, an F-15B version, was use by NASA as an Aerodynamic Flight Facility from the summer of 1994. Those ‘B’ platforms were known inside the space agency as NASA 836 units. Their primary function was to carry a Flight Test Fixture (FTF) on its center pylon.
Inside each FTF were research systems, materials for testing and advance instrumentation. An example of this was the X-33 Thermal Protection System which was tested in FTF-II. The system calibrated, monitored and instrumented the many materials destined for the X-33 flight experimentation profile.

On January 5th, 1976 NASA acquired an F-15A (71-0287), the eight ‘A’ ever produce, designated NASA 835. The 835, which is NASA’s top operating Eagle, served as a test bed for futuristic propulsion systems, aerodynamics, control mechanism, flight techniques and fly-by-wire integrated computers. In 1982, the unit was modified to test the highly advance DEEC Engine Control System (ADECS). The ADECS was a platform utilized to evaluate and to achieve stall control of the engine’s margin under different operational parameters. 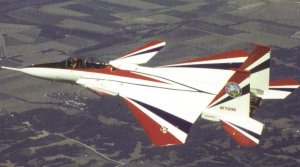 After completing the evaluation with ADECS, the 835 was fitted with the Highly Integrated Digital Electronic Control (HIDEC), a new system intended to use computer power to detect loss of, or degradation of control surfaces. It was expected that after the problematic area was identified, HIDEC would re-configured the remaining control sections to compensate. At the same time, it would alert the pilot of the problem and generate a new, real time flight package to assist the pilot in keeping the plane flying.
NASA 835 also tested the controversial Self Repairing Flight Control System (SRFCS) in the autumn of 1989. The SRFCS was, in some ways, very similar to the HIDEC, but one thing that the Self Repairing system offered was an in depth analysis of failures other that that of the control surfaces. Hydraulics, mechanical and electronic systems were all monitored by SRFCS, which will make any correction needed to failing systems in order to keep the aircraft airborne.

In the summer of 1991, the 71-0287 was redesigned to be part of the Performance Seeking Control (PCS) program. The program main function was to optimize engine performance and assure safe operation of the power plants through digital monitoring of failures and digital control of the inlets, nozzles and flight control sections.

835 ended its long and distinguished NASA career flying as a Propulsion Controlled Aircraft (PAC). PAC was initiated because a series of crashed caused by loss of flight control prompted the agency to commence a program to determine whether was possible that a system could be design to maintain control of an aircraft by altering thrust parameters on a single power plant.
Initial results with PAC showed promise as it proved the concept of control through pitch with one engine, though asymmetric application of thrust from two engines was needed to alter heading and induce roll. NASA 835 was the only aircraft using PAC. In one test flight, the unit flew down to less than 10 feet above a runway at 150 KIAS utilizing thumbwheels. Successful landings at Edwards AF base in California proved the soundness of the concept.
The last PCA flying program attached to the 835 was that of the Landing/Maneuvering Technology Demonstrator (S/MTD) for testing emerging technologies for suitability to the USAF’s Advance Tactical Fighter program. Technologies used on the F-22 Raptor and the new F-35 Lighting II.