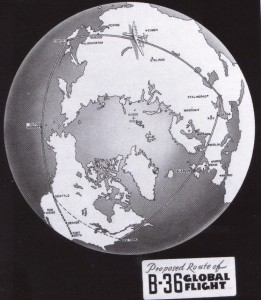 Conceived during the waning moments of the Second World War as the world’s first true intercontinental bomber, the amazing Convair’s B-36 Peacemaker would go on to have a relative tumultuous short operational life span. Since its conception in late 1941 through its maiden flight on August 8th, 1946, the B-36 seemed to be always on the brink of cancellation. Six times between 1943 and 1945, the Pentagon and Congress tried to shut down the entire program.

At the heart of the discussion was the feasibility of mass produce a large piston-powered platform in light of the rapid development of the jet engine and the possibilities it offered. Clouding even more the issue was a bitter inter-service battle between the newest member of the Pentagon, the Air Force, and the most revered one, the Navy, for control of America’s nuclear deterrence arsenal. In the end, no amount of controversy or Congressional investigations (there were 5 officials ones between 1943 through 1946) managed to stop the program.

The B-36 went on to serve on the front lines but for only 10 years, four of them on active operational status. A pale figure when compared with its replacement, the venerable B-52, which still remains is the US main heavy bomber platform more than five decades since its development. But despite this apparently overwhelming argument against the operational capability of the Peacemaker, the plane did something few others managed. It pushed the limits of technology during its active run. In a nutshell, the Peacemaker became a technology test bed.

Several of these state-of-the-art activities performed by the B-36 are commonly know. Its role as America’s first and only nuclear powered aircraft has been well cover for the past two decades. But others aspects had not been that well covered. One of those was Project Global Flight.

In the spring of 1945, one full year before the bomber were to take to the air for the first time, Convair top officials were so impressed by the Peacemaker’s projected long range profile, that they decided to plan an around-the-world marketing flight. Two full years after the initial interest and after relative small investment on the project, the company abandoned the idea without much fan fare.

On a clear January 1947 (6th) morning and in front of small group of reporters and Air Force officials , Convair revealed the extent of Project Global Flight’s characteristics. The program called for a modified B-36, stripped of all its amour plating, armament, antenna and radomes. The sighting blister would also have been removed. The radio operator, bombardier and gunners would have stayed home for the adventure. Without the gunners there would haven’t a need for guns, so all firing systems were schedule to be decommissioned as would the instrument panels and forward compartment carpeting. The only parts of the interior expected to survive the stripping, albeit in a modified state, were the gallery and crew bunks.

All the modifications would have saved an estimated 5,000 pounds of overall take-off weight. On top of that, the ‘new’ Peacemaker was to be fitted with six new, experimental flexible fuel cells installed on the wing structure. Four adjacent bomb bay fuel tanks were to be installed on the lower air frame section. The last planned alteration propose was the housing on bomb bay door number 4 of four Aerojet (4,000 pounds of thrust) jet assisted take-off (JATO) bottles for fast takeoff operations.

The final plane profiled for this over modified B-36 stated an operational range of 15,075 nautical miles at an average cruising speed of 210 mph. Accordingly to Convair’s press release, Global Flight would have taken off from Idlewild Airport in New York. Following its departure, the massive bomber would proceed with a circle route over Scotland, Germany, the Black Sea, the Soviet Union, Japan, the Aleutian Island in the Pacific Ocean, until it reached Vancouver Island on the Canadian Pacific coast. From then, the aircraft was set to move southward until reaching Forth Worth, Texas, its final destination point.

In the end, this projected flight path, along with the substantial modifications planned for the B-36 in order to completed, were never performed. Reasons for the cancellation varies from account to account (budgetary issues, serviceable airframes at the time and the flight over Soviet Russia are the most commonly use excuses), but the fact that the project faced so many uncertainties in its developmental stages probably doomed the idea.@