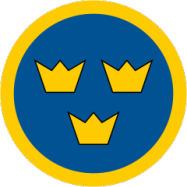 In 1912 the first aircraft was presented to the Swedish Army. An Army Aviation Corps was formed with this aircraft, plus a second example. On 1 July 1926, the Army and Navy aviation units were amalgamated into the Royal Swedish Air Force, an independent service. The air force expanded rapidly during World War Two to meet the increasing threat from Germany. Postwar, the air force pioneered the concept of operating jet combat aircraft during wartime from roads and concealed airfields around the country.

The Swedish military serial numbering system consists of a five or six-figure number, with the first two or three numbers being the aircraft type designation number and the remaining three numbers and individual identity number which normally starts at 001 for each type, e.g. JAS 39C 39230.

Details of designation system to be added.

The basic operational unit is the Flygflottilj (wing), made up of 2-4 Flygdivisionen (squadrons), each with approx 18 aircraft. Each wing also has an attached flight, a Sambandsflygrupp for liaison duties.