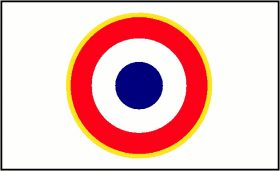 The Troupes Coloniales were army units formed to primarily serve in French overseas territories. They were initially formed under Navy control but in 1900 were transferred to Army control. They often consisted of French regular officers with native enlisted men. Between 1947 and 1952 the Troupes Coloniales operated six Supermarine Sea Otters from BAN Cat-Lai in French Indochina, (now Vietnam). It is not clear what, (if any), other aircraft the TC operated or what the unit designation was. These aircraft were active at the time when French forces were combating escalating guerrilla operations by the Viet Minh. The term ‘Aviation Coloniale’ was a generic term for French overseas military aviation and not specific to the TC.

The Sea Otters appear to have operated in standard Aeronavale colours, even though the Troupes Coloniales was a part of the Army.

All aircraft are operated by a single unit of unknown designation.

The Sea otters were based at BAN Cat-Lai in French Indochina – which was near Saigon.