All AAAC aircraft and helicopters are currently active.

Army aircraft originally operated in an overall dark green colour scheme with RAAF-style Red Kangeroo roundels in the standard six positions, and a blue-white-red fin flash. The service title ARMY was carried on the fuselage sides. With the adoption of the dark green/medium green/sandy brown camouflage on front-line types, the fin flash was deleted and the roundel was replaced by a black kangeroo low-viz marking on an area of the sandy brown camouflage. There is no ring around the kangeroo marking. ARMY service titles are carried on the fuselage sides.

Aircraft operating with the AAAC carry serials in the same sequence as the RAAF, e.g. Chinook A15-102.

The AAAC comprises the 16th Aviation Brigade of the 1st Division of the Australian Army. It is divided into the 1st, 5th and 6th Aviation Regiments plus the Army Aviation Training Centre.

Any photographs illustrating this operator would be welcome.
of the Australian Army Aviation Corps

This page lists all the flying units of the Australian Army Aviation Corps, since its formation.

of the Ukrainain Army

This section describes and illustrates the various national insignia used by Ukrainian Army Aviation since its formation: 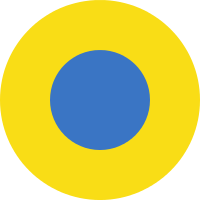 1992 – present
The main marking is displayed on the fuselage sides of Army helicopters. No fin flash is worn. All helicopters also carry the Ukrainian National Flag on their belly.

Serial numbers consist of a two-digit number in yellow, over the range 01 to 99. All current serials are in yellow, but red, white and black were also used in the early days.

The main bases are Kalyniv and Brody.

The former air base at Kherson/Chornobaivka Airport is no longer used by Army Aviation.

Any photographs illustrating this operator would be welcome.
Operator Profile

The service was formed in the 1980s as Arma Aerea del Ejercito Paraguayo with some liaison aircraft and was later renamed Aviación Ejército Paraguaya. The aircraft are operated by Grupo Aéreo de Transporte Especiales of the FAP although they have Ejército serials. In 2009 the aircraft were absorbed into the Air Force.

All aircraft were transfered to the Air Force in 2010.

It was reported in October 2013 that the Army is considering the purchase of a number to troop transport helicopters.

Serials began with number 1 and were used in chronological order as aircraft arrived with Army Aviation. The prefix was TE.