This section describes and illustrates the insignia used by the Indian Coast Guard Air Wing since its formation:

1978-present
The standard ICGAW colour scheme is white overall, with a blue-white-white diagonal stripe across the fuselage. Displayed upon the widest blue diagonal stripe is the a modified version of the ICG crossed-anchors and shield insignia. The national flag is displayed on the fin. Helicopters additionally carry the Indian national insignia roundel under the fuselage belly. The service title ‘COAST GUARD’ is displayed in English on the port side of the forward fuselage, and in Sanskrit on the starboard side. 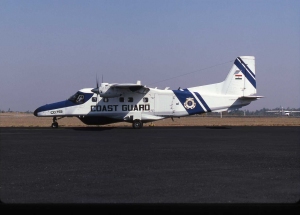 At least nine S-61N Mk II operated at various times, 1991-present. Used search and rescue duties. The assigned operating bases were not fixed and aircraft could switch between bases to allow for scheduled maintenance of the normal resident. EI-BHO & EI-BLY were operated by Irish Helicopters under contract, the others being operated by Bond Helicopters/CHC Helicopters Ltd under contract.