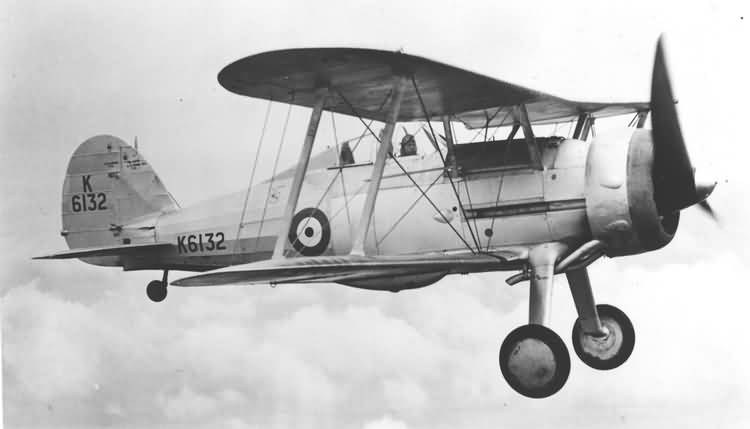 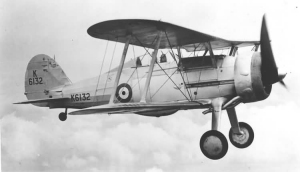 The Gloster Gladiator was the RAF’s last biplane fighter. It appeared at a time when monoplanes were already eclipsing biplanes and yet achieved wartime fame in the hands of skilled pilots, fighting some of the most dramatic battles of the early war years.

Air Ministry specification F.7/30 was formally issued to industry in late 1931. It called for a day and night interceptor with a maximum speed in excess of 250 mph (402 km/h), and a four-gun armament. A preference for the use of the Rolls-Royce Goshawk steam-cooled V-12 engine was expressed. The call for a maximum speed some 40 mph faster than the latest RAF fighter (the Hawker Fury), but with double it’s armament, was clearly intended to steer fighter designers away from the traditional engine and armament formula that had been on offer since the Great War. With orders hard to come by, seven designs were offered for consideration. Maiden flights of the contenders took place between February and September 1934. Unfortunately, every Goshawk-engined type suffered severe cooling problems and the selection competition had to be delayed until mid-1935.

During this time, the Chief Designer of Gloster Aircraft Company, H.P. Folland was pre-occupied with developing the S.S.19 fighter to meet Air Ministry requirements, and so did not immediately participate in the F.7/30 competition. However, in September 1933 the S.S.19 was selected for production for the RAF as the Gloster Gauntlet. Folland’s team therefore began to examine possible further refinements to the Gauntlet design. The new features included an uprated Mercury engine, a single bay wing with landing flaps on the upper and lower wings, a single-leg cantilever landing gear and Lewis machine guns mounted in the lower wings. In May 1934 Gloster Aircraft was brought by Hawker Aircraft Limited, and this introduced substantial financial capital and aircraft structures know-how into the company. Calculations showed that the proposed Gauntlet derivative would have a performance very close to the F.7/30 requirement. Accordingly, the company authorised the construction of a private venture prototype – designated the S.S.37 – using a Gauntlet fuselage. The maiden flight took place on 12 September 1934.

The Air Ministry was by now aware of the poor performance of the various F.7/30 contenders. It also saw the urgent need to find a stopgap fighter head of the forthcoming Hurricane and Spitfire projects then being designed. Company testing of the S.S.37 showed that it had realised the expected performance gains of the design, and so when the type was offered to the Air Ministry it aroused considerable interest. On 3 April 1935 the S.S.37 was transferred to RAF ownership with the serial K5200, and official flight testing at Martlesham Heath commenced immediately. In parallel, Glosters proposed that a production version would feature Hawker-syle construction with a redesigned tail unit, Mercury X engine and an enclosed cockpit. In June the private venture Gloster fighter was declared the winner of F.7/30, and a new specification, F.14/35, was rapidly written to cover the production version. On 1 July 1935 the allocation of the name Gladiator was officially announced and an initial contract for 23 aircraft placed. In September 1935 a second order for 180 aircraft was agreed.

The first production Gladiator Mk I flew in January 1937, and No. 72 Squadron at Tangmere took delivery of it’s first aircraft on 23rd February 1937. The last Mk I for the RAF was delivered at the end of 1937. Mk I aircraft were delivered with the Watts two-bladed wooden propeller. Production continued to satisfy a number of export customers. The first export contract being agreed with Latvia on 27 May 1937.

In-service experience with RAF squadrons had meanwhile highlighted the unsuitability of the Mercury IX/Watts propeller combination. In its place Glosters offered the Mercury VIII and three-bladed Fairey Reed metal propeller. The new version was called the Gladiator Mk II, and an initial order was placed in early 1938. By March 1938 sufficient metal propellers were available to launch a programme to retrofit all the Gladiator Mk Is with this propeller. From 1938 existing Gladiator units began to re-equip with the Spitfire or Hurricane. Units converting from the Gladiator experienced a much lower accident rate than other fighter squadrons.

At the end of 1937 the Royal Navy had begun to show interest in a shipboard version of the Gladiator II as a replacement for the Hawker Nimrod. As a stopgap measure, 38 RAF Gladiators were transferred to the Admiralty and designated Sea Gladiator (Interim). Although they carried hooks, they were not intended for operational use aboard carriers. A further 60 full-standard Sea Gladiators were also obtained. These differed from the RAFs Gladiator IIs in being equipped with catapult spools, arrestor hook and dinghy stowage (between the landing gear legs). Sea Gladiators first embarked in HMS Courageous with 801 Squadron in March 1939.

When World War 2 started in September 1939, only four home-based fighter squadrons (Nos.603, 605, 607 and 615) were still equipped with Gladiators – although 141, 151 and 263 Squadrons were subsequently reformed with Gladiators as temporary equipment. 607 and 615 Squadrons formed part of the Air Component of the BEF, sent to France in November 1939. These two units were just beginning to re-equip with Hurricanes when the Germans attacked on 10 May 1940. The Gladiators suffered heavy losses to the Luftwaffe’s modern aircraft and had to be withdrawn to southern England to complete the conversion to Hurricanes.

In April 1940, No. 263 Squadron was sent to Norway to assist British forces against a German invasion. Operations from the frozen Lake Lesjaskag ended when Luftwaffe bombers destroyed the aircraft on the ground. Replacement Gladiators accompanied the Squadron when it deployed to Narvik in the far north. They fought continuously until 7 June, claiming 26 confirmed victories, before the survivors landed on HMS Glorious for the voyage home. The carrier was subsequently attacked by the German battle-cruisers Scharnhorst and Gneisenau and sunk.

Only 247 Squadron at Roborough officially flew Gladiators during the Battle of Britain, although a number of other units had them on second-line strength. 247 Sqn flew many patrols but never saw any combat during the Battle.

When Italy entered the war in June 1940, Gladiators were serving with No.33 and 80 Sqns in Egypt, and with No.94 Sqn in Aden. The Gladiator proved a fairly even match for the Fiat CR.42 and was successful in helping repel the Italian invasion of Egypt and defeat Italian forces in East Africa.

In Malta the Royal Navy had stored a number of Sea Gladiators in crates to re-supply carrier squadrons as required. In May 1940 four Sea Gladiators were assembled by the RAF and test flown. For 10 days (11 to 21 June) the Sea Gladiators represented the Island’s sole air defence, before some Hurricanes were impressed into service. The Italians staged only three air raids on the island during this period. Due to a shortage of ammunition, the Sea Gladiators were used to break up the bomber formations, rather than pick off individual targets. Some months later, a Maltese newspaper published a report on the Sea Gladiators which ensured that the names Faith, Hope and Charity (never actually applied to the aircraft) entered aviation mythology.

The Gladiators of Nos. 80 and 112 Squadrons participated in the Greek campaign, achieving good results against the Regia Aeronautica but were outclassed once the Luftwaffe joined the battle. In 1941 Gladiators from No.94 Sqn participated in the ‘Battle of Habbaniyah’ against Iraqi rebels besieging the RAF training base.

Gladiators continued to serve in the Western Desert throughout 1941, but finally disappeared from front line service in January 1942. In second-line duties the type continued to fly with No.521 (Meteorological) Squadron and numerous Meteorological Flights until Janaury 1945.

The first export aircraft to see combat were those of the Chinese Government, which had acquired 36 Gladiator Mk Is for use against the invading Japanese. Despite numerous accidents by inexperienced pilots, the survivors flew with some success in the defence of Siuchow during 1938.

In Swedish service the Gladiator I was designated J 8, and the Gladiator II designated J 8A. Some of these served with Flygflottilj 19, the volunteer unit which served alongside the Finnish Air Force in the Winter War of 1939-40. The Swedish unit was in action for 62 days, destroying 6 Russian bombers and 6 fighters for the loss of 3 Gladiators – one due to an accident. The Gladiator IIs sold to Finland itself served principally with HLeLv 26, and while it’s handling qualities were praised, the lack of armour protection and self-sealing fuel tanks did not make it popular.

Many RAF Gladiators were supplied to Allied air forces, including Greece, South Africa and Egypt. The Royal Egyptian Air Force aircraft remained airworthy until shortly after the end of the war, while Portugal retained it’s Gladiators for advanced pilot training until 1953 before scrapping them. The sole surviving airworthy Gladiator is now maintained and preserved by the Shuttleworth Trust at Old Warden, Bedfordshire.

Gloster’s private venture development of the already highly-refined Gauntlet brought the biplane fighter concept to the peak of technical perfection. In many air arms it smoothed the transition to advanced monoplane fighters, and in confronting aircraft of its own era it performed well, but when called upon to engage modern combat aircraft its obsolescent design was cruelly exposed. The skill and determination of its pilots however, has allowed the Gladiator to acquire a wartime reputation which might otherwise have been tainted with tragedy.

* The height of 10 ft 4 in (3.15 m) quoted in many sources is the minimum height when the propeller blades and fuselage are horizontal.

* The height of 10 ft 4 in (3.15 m) quoted in many sources is the minimum height when the fuselage is horizontal and the propeller has been rotated to have two blades at the top and one vertical blade at the bottom.

‘Gloster Gladiator (Mushroom Magazine Special No.6104)’ [Order this book from Amazon UK]
by Alex Crawford
Published by Mushroom Model Publications, Mar 2002 ISBN: 83 916327 0 9
* Complete operational history, covering all the air forces using the Gladiator – from Finland to China. The book includes the true story of the legendary defence of Malta. 160 pages with 64 in colour.

‘Gloster Aircraft Since 1917’ [Order this book from Amazon UK]
by Derek N James
Published by Putnam Aeronautical Books, June 1987 ISBN: 0 85177 807 0
* Detailed company history with a chapter on the Gladiator.

Gloster Gladiator
(Multi-page profile of the Gladiator, including all known operators)

Roy Tassell has a nice 1/36 scale drawing of the Gladiator.