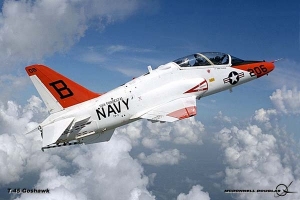 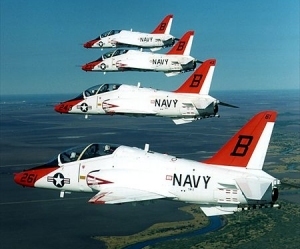 The T-45 is a rare example of the US Armed Forces adopting in large numbers an aircraft of non-US origin. This must be considered a very positive endorsement for the Hawk jet trainer, from which it was originally derived. However, during it’s protracted development the T-45 has evolved into a training aircraft with virtues which are significantly different from those of the Hawk.

In the late 1970s the US Navy began formulating the requirements for a new training aircraft to replace the faithful but ageing T-2C Buckeye intermediate trainer and TA-4J Skyhawk advanced trainer. The new aircraft would form part of a fully integrated training system for undergraduate jet pilots – including aircraft, simulators, training aids and logistics support to be furnished by a single contractor. The programme was called VTX-TS, meaning Heavier than air, Training aircraft Experimental – Training System.

In January 1978 British Aerospace and the Douglas Aircraft (DAC) division of McDonnell-Douglas Corporation (MDC) agreed a teaming arrangement to compete for VTS-TS. McDonnell-Douglas and British Aerospace were already co-operating very successfully on the Harrier II, and so MDC was a natural US partner for the new programme. In late 1978 BAe and Dassault-Dornier were awarded contracts to study the required engineering changes for Hawk and Alpha Jet carrier operations respectively. Early in the evaluation the Hawk demonstrator, ZA101/G-HAWK, had paid a 31 day visit to the USA, during which it flew a total of 85 evaluation sorties.

On 18 November 1981 the proposed naval Hawk variant was declared the winner and assigned the designation T-45. The Hawk chosen on the basis of its flying quantities, design maturity and low fuel consumption. Mcdonnell-Douglas Corporation (MDC) was designated the prime contractor, with BAe responsible for the airframe, Rolls-Royce for the engine and Sperry for the simulators. Following completion of detailed engineering design, full-scale development was launched in mid-1984, for the production and flight testing of four pre-production aircraft. To speed up introduction into service, it was initially planned to buy 54 non-carrier capable minimum change T-45B versions, before moving on to the more extensively modified T-45A. After review it was decided that producing all aircraft as T-45A models would give better overall value for money, at the cost of a short programme delay. The T-2 and TA-4J trainers remaining in service received life extension programmes to bridge the gap.

The first development T-45 aircraft (BuAer. 162787), Ship 1, was rolled out at Long Beach, California, on 16 March 1988, and made it’s maiden flight on 16 April. A second development aircraft (BuAer. 162788) followed in November 1988. These two aircraft have sometimes been erroneously referred to as YT-45s. Flight testing was carried out at Yuma, Arizona and then at NATC Patuxent River, Maryland.

Although the T-45 met the original VTX requirements, detailed operational flight testing and evaluation by NATC identified a number of performance and flying shortcomings which would adversely affect its ability to safely conduct day-to-day training operations. Accordingly a modification programme was put in place to rectify the perceived deficiencies. The F405-RR-400 turbofan originally fitted, (a derated version of the original 5,450 lb st (2472 kg) Adour 861 engine), was replaced by the 5,845 lb st F405-RR-401, based on the Adour 871 used in the Hawk 100 and 200. The -400 engine had been derated to meet Navy demands for fuel economy and longevity, but it was determined that more thrust was needed in the critical high drag carrier approach configuration. Full-span wing leading edge slats were added, (to improve stall characteristics), and the wing-tips squared off, while a 6-inch (0.152 m) extension to the tail fin was added, and an increased span tailplane with squared tips fitted. A single ventral fin was added in front of the arrestor hook hinge fairing. Control harmonisation was also improved, and airbrake/tailplane movement interconnected.

While these modifications were being developed, design responsibility for the T-45 was transferred from Douglas at Long Beach to McDonnell-Douglas at St Louis. Although lack of design capacity at Douglas was cited as the main reason, the political and technical benefits from bringing in experience accrued from development of the F/A-18 naval fighter-bomber undoubtedly influenced the decision. Flight testing of the modifications at NATC from September 1990 showed a marked improvement in handling characteristics, and on 4 December 1991 the first pre-production aircraft conducted a successful series of carrier trials aboard the USS John F Kennedy. At this time the T-45 test fleet consisted of the two original (Long Beach built) Full Scale Development (FSD) aircraft with interim uprated F405-RR-400A (Adour 861) engines, and two (Palmdale built) Pre-Production aircraft (BuAer. 163599 & 163600) with F405-RR-401 (Adour 871) engines.

On 16 December 1991 the first St Louis built T-45A achieved its maiden flight. Built to full production standard, this aircraft was formally handed over to the US Navy on 23 January 1992. Introduction of the type into service at NAS Kingsville, Tx, with VT-21, commenced soon afterwards. As required under the contract, this process involved delivery of simulators and training facilities to Kingsville, conversion of the flying instructors to the new aircraft and the new curriculum, and putting in place the contractorised maintenance organisation to support the aircraft. Undergraduate training on the new type commenced in early 1994, and on 11 February 1994 the first student pilot flew in the T-45. The first class to earn it’s wings on the T-45 graduated in October 1994.

Further development of the T-45 has continued. One production aircraft (BuAer. 163635) was fitted with an experimental digital ‘glass’ cockpit known as Cockpit 21. Many of the normal dials on the instrument panel were replaced by two monochrome Multi-Function Displays (MFDs) in each cockpit to better represent the type of cockpit now seen in modern front-line aircraft. Additional avionics include a MIL-STD-1553B databus, Rockwell Collins GPS and a Litton ring laser gyro INS. Flight trials commenced on 19 March 1994, and were sufficiently successful that the change was adopted on the production line from the 73rd aircraft (BuAer. 165081). Aircraft with Cockpit 21 are designated T-45C, and it is anticipated that all production T-45As will also be retrofitted to this standard and redesignated T-45C. A proposal to modestly increase fuel capacity, through the use of fuel tanks in the air intakes was dropped. However, US Navy dissatisfaction with some aspects of the F405 engine led in 1996 to one T-45A being fitted with an AlliedSignal F124 engine for flight testing. The F124 engine was offered to some potential T-45 export customers, particularly Australia, but not taken up. The US Navy’s engine concerns were eventually tackled by an F405 engine modification programme put in place by Rolls-Royce.

T-45s now in service are based at NAS Kingsville, Texas and NAS Meridian, Mississippi. The aircraft are permanently based ashore and flown out to the training carrier for deck landings. Since the transition to the T-45, the training task has been accomplished with 25% fewer flying hours, using 42% fewer aircraft and 46% fewer personnel. With the current T-45 training demand, the U.S. Navy has been averaging more than 60 hours per month per airframe – one of the highest utilisation rates in the world.