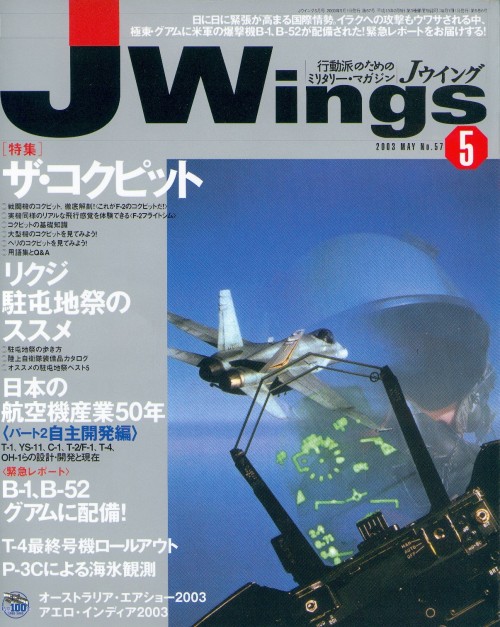 Since first appearing in summer 1998, J-Wings has firmly established itself at the forefront of the Japanese market. A sister publication of Airline (see above), it contains information more geared to the roving military aviation enthusiast, combined with the more serious factual approach of say Koku Fan. Like that esteemed publication, J-Wings includes superb photographic content in its coverage mix. The front half usually features an in-depth topic or profile feature, Japanese base visits, industry coverage and air show reports from around the world.
Extensive coverage is naturally given to the Japanese air show season, which runs from April to early December, and the June issue (published in the third week of April) contains a pocket-sized preview supplement devoted to it.
The back half, following a long-running historical feature devoted to individual World War II types, starts with World-Wide Photo Press, covering a pot-pourri of topics. Cyber Warlord looks at the latest in related computer game software and precedes several pages devoted to photo reportage from around Japan, including base visitors and a reader photo competition. A news section, which often includes a photo report from Russia courtesy the ITAR-TASS news agency, precedes other regular features, an aviation museum visit and plastic model reviews.
In typical Japanese fashion, and what might appear slightly incongruous to Western eyes, an historical subject is also given the manga comic treatment. Book reviews appear ahead of a large advertising section devoted to the Norimono Kurabu (“Transport Club”), formerly Airshop Ikaros, the publisher’s own retail bookshop and model outlet located nearby.
What some might see as irritating coverage of irrelevant subject matter, such as armoured vehicles and firearms, should disappear with the April 2003 launch of J-Ground magazine, following in the wake of J-Ships.
See also their new quarterly publication Military Classics. 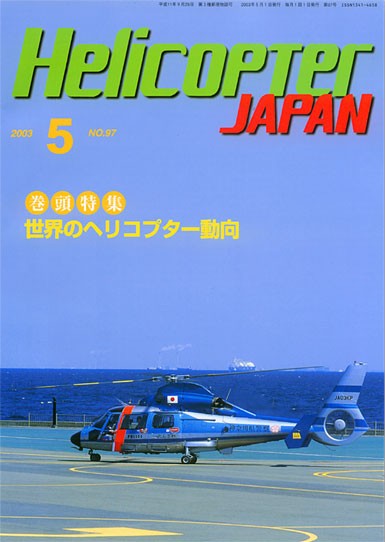 Reaching Issue 95 in March 2003 this specialist monthly is published in the first week of the month that appears on the cover. It covers both civil and military subject matter, including helicopter operations of the emergency services, with both colour and monochrome illustrations. Another section deals with new registrations. 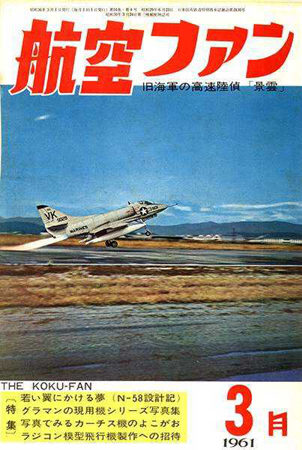 Widely regarded as the Japanese aviation magazine, Koku-Fan (“Air Fan”) first appeared in 1952. Since the 1980s its unrivalled photographic content alone have made it a favourite even among non-Japanese readers. Perhaps the only way its photographic impact could be enhanced would be to enlarge the magazine format, which is currently smaller than A4, but the publisher does not see the need to change it or, more importantly, incur the increased production costs involved – in a bid to reduce them an English summary was sadly sacrificed some time ago, as was the inclusion of fold-out colour profiles and scale plan drawings.
Over such a long history the magazine has naturally undergone several changes but the first quarter is still given over to its renowned colour section, with military and World War II vintage material predominating. Air-to-air gems from the lens of such aviation photography luminaries as Katsuhiko Tokunaga provide real visual impact. Colour reappears in the middle features, including the KF Special File and occasional Airline Update. Already used in the Slap Shot readers` photo contest section it has recently been encroaching into the Readers` Reports domestic photo gallery too. Photo Topics of the World remain monochrome.
Articles cover in-depth both one-off and serialised subjects. A series on IJN and IJAAF unit histories ran from September 1995 to August 2002. Current (April 2003) regulars include a series on the US test facility Area 51, the Arado Ar234 and individual accounts of Japanese operations in World War II.
The magazine concludes with news sections, including “From Base Side” devoted to US military bases worldwide, book and model reviews.
Every two months Bunrindo produces another title for its excellent softback Famous Aircraft of the World profiles, which are similar in content to the Airplanes Digest feature that used to appear in the magazine. As an example the latest (No.99, published in March 2003) covers all variants of the Heinkel He111 and includes eight pages in colour, a fold-out colour side view, and 80 pages in black and white. In Japan, these superb magazine-type books retail for around ¥900, or the equivalent of about a fiver.
See also Koku Fan Illustrated (quarterly).

Roughly 160-200 pages in each issue, smaller than A4 size magazine with 20-30 colour pages. Approx 200 high quality b+w and colour photos, colour profiles, tone profiles, scale line drawings etc. Until 1980 each issue included a foldout scale plan drawing, but this was replaced by a multi-page modelling manual giving lots of close-up and markings details for a single aircraft type. 1980 also saw a move to better quality paper and more colour pages. 16 page English summary included in each issue until the 1990s. 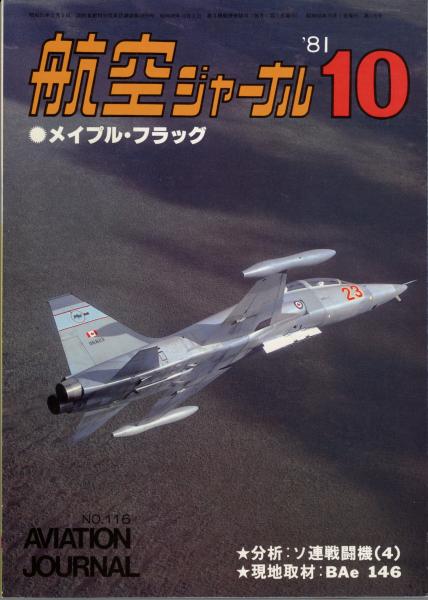 First published in 1972. Similar format to Koku-Fan. Typically 162-168 pages in each issue, with 6 pages colour, foldout colour drawings, detail and scale line drawings, and many b+w photos. English captions and subtitles. Each issue usually featured an aircraft type and an operator in detail, plus shorter features on airshows, airlines, etc. The majority of subjects were modern military aviation. Ceased publication circa 1984. 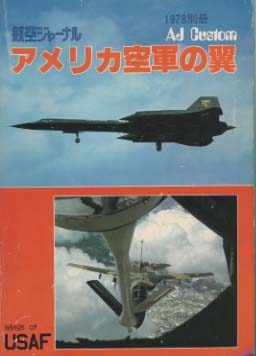 Aviation and scale aircraft modelling magazine published during the 1970s. No further information. 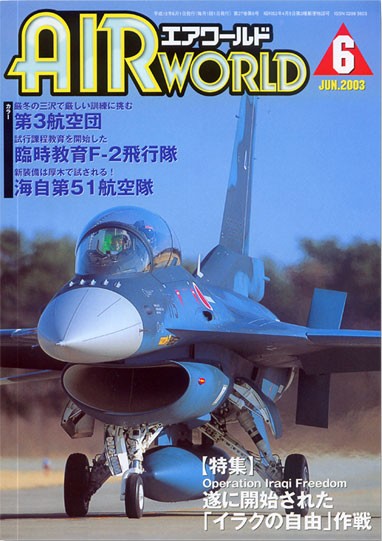 First published in March 1977, Air World has a similar format to Koku Fan (see below), commencing with an extensive 46-page front colour section, which incorporates one major feature text plus domestic and international news topics. The black and white section usually has another special feature, with other regulars including a USAF review, a “Russian Watching” section with ITAR-TASS news agency photos, “Space Watching” and Air World Data File, which has been listing order of battle information on world air forces by region. Long-running series have recently (April 2003) included an analysis of modern aircraft types and the solo flying exploits of Senpa Shimizu. The final pages cover domestic (including a civil register update) and international news in text form, “Air Library” and “New Kit World”. (Japanese only text) 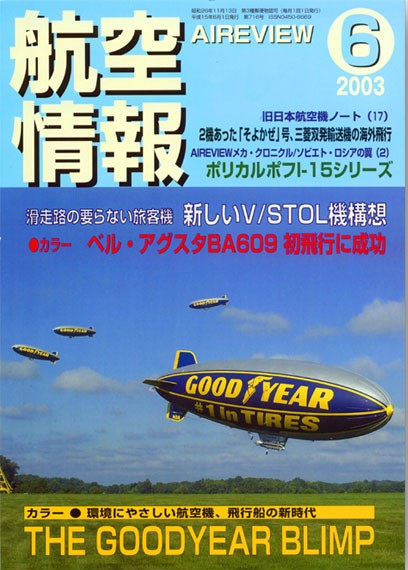 In Japan, monthly magazines are generally published two months in advance of the month appearing on the cover, thus Issue 715 of Aireview (May 2003) appeared in shops in late March.
This long-standing title tends to open with a short colour section on various items of topical interest, with another 6-page domestic photo news section later. Similarly, the contents generally follow a set sequence: civil, military, domestic and overseas news, airline topics, an in-depth chronicle focusing on a particular type, 24 pages of manga cartoons dealing with historical events (which won’t be to every Westerner’s taste), obituary columns for aviation figures and book authors, Japanese civil register and book/magazine reviews, ending with a scale model column. First published in the early 1960’s. Title in Japanese is ‘Koku Johu’. (Japanese only). 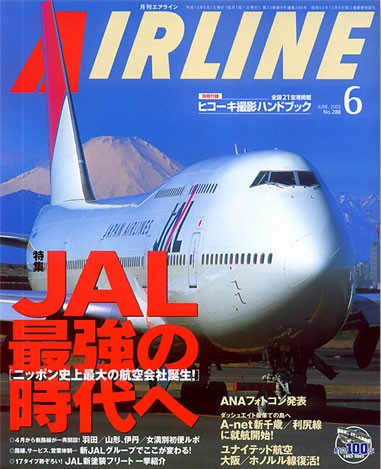 From the same publisher as and showing more than a family resemblance to J-Wings (see below) the longer-established Airline does exactly what its title suggests by providing wide, in-depth coverage of all aspects of commercial aviation – the aircraft and the people who work on them – but only in Japanese.
For example, features in the April 2003 issue (No.286) covered YS-11 winter operations in Japan’s frozen north, an in-flight report about an inaugural Japan Air Commuter Dash8-Q400 service, a special on the Airbus family focusing on the A380 and industry interviews related to the plight of United Airlines. Photographic content, with contributions from around the world, is to a consistently lavish standard.
Targeted at wannabe pilots as well as aviation enthusiasts the magazine also includes flying course advertising amongst extensive plugging of the wares available from Ikaros` own Norimono Kurabu (‘Transport Club’ – formerly Airshop Ikaros) hobby shop and articles on modelling and airport photography. In this latter respect, the “Airport Walker” series has been started to give terminal building layout, best photography locations and arrival and departure information for a particular Japanese airport in each issue.
Ikaros also publishes the annual Airliners Album (ISBN 4-87149-446-2, ¥2860) and the seventh title in its airliner series, covering the DC-9/MD-80/MD-90/Boeing 717 family (ISBN 4-87149-413-6, ¥2860) was published in October 2002.
First published during the 1980s. Covers all facets of airline operations in Japan, including articles about the aircraft and the people who work on them. Each issue includes a mini-timetable listing all Japanese domestic flights, and a gift shop catalogue for airline enthusiasts. 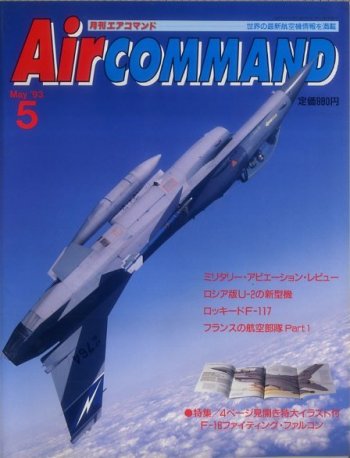 AirCommand was another monthly magazine that featured modern military aircraft. It’s unique feature was a four-page fold-out colour drawing of the main featured aircraft type. These appear to have been taken from the UK ‘Warplane’ weekly partwork. First published in December 1992, it continued until October 1994 at least. 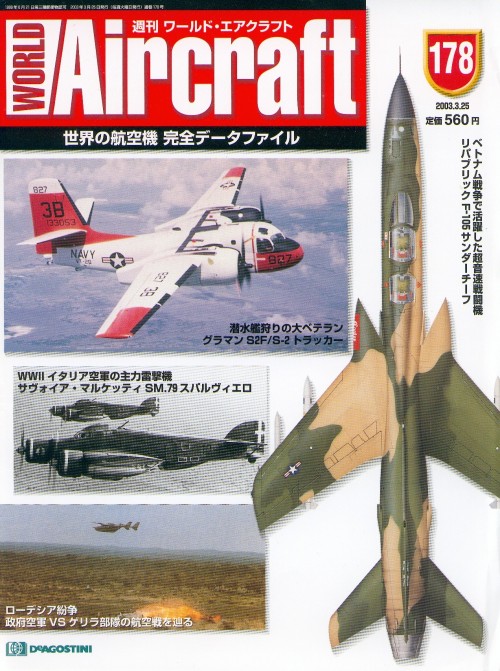 This weekly partwork is a Japanese version of the World Aircraft Information Files series originally published in the UK by Aerospace Publishing (now part of the Summertime Publishing Group) from 1998. It was launched in Japan in September 1999 and had reached No.180 of an originally planned 216 issues in April 2003. Sections covered are: World Military Aircraft, Weapons and Tactics, Air Accident File, The World of Private Flying, Air Forces of the World, Air War Analysis, Air Heroes, Special Purpose Aviation, Aviation Technology, World Civil Aircraft, Airlines of the World, Aircraft A-Z and Aviation History.
DeAgostini also markets the related World Aircraft video collection in Japan.