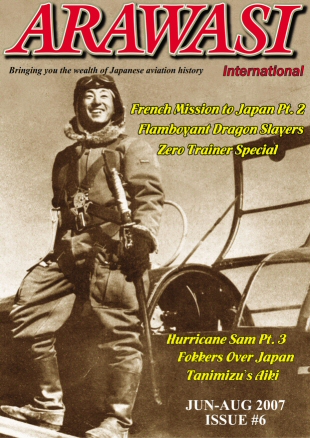 Subtitled ‘Bringing you the wealth of Japanese aviation history’. This is an ENGLISH language magazine produced by aviation enthusiasts and historians, focussing on the history of Japanese Aviation from its birth until the end of the Pacific War. Illustrated with rare b+w and colour photographs and original colour profile drawings, it contains feature articles on the aircraft, personalities and pioneering flights of early Japanese aviation. The first ‘amateur’ issue was dated July 2005 and had 30 A4-sized pages, with 4 colour profiles. Later issues are professionally printed on glossy paper. Issue 10 has 50 pages and 14 colour profiles. 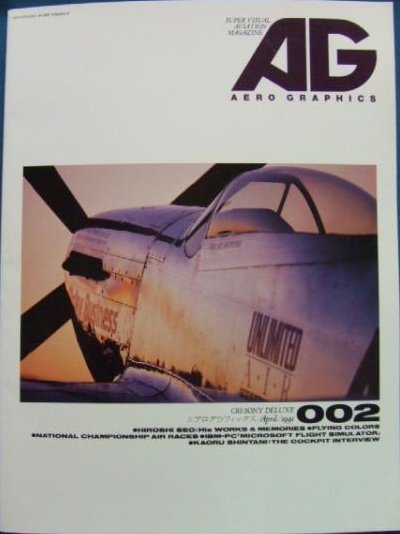 Subtitled ‘Super Visual Aviation Magazine’. Aero Graphics appears to have been a “coffee-table” magazine with the emphasis on nearly full-page colour photographs of current and airworthy vintage aircraft around the world. 96 large format pages. Issue 001 was dated December 1990 and publication reached at least issue 003 (July 1991). No further information.

Japanese-English sub-title `Human and Aircraft Story of Aviation Adventure`. Big format (235x300cms) magazine-cum-book (`mook` as the locals call them), printed on the type of paper normally reserved for subjects like art and interior design.

Each issue covers a variety – some might say a hotch-potch – of subjects, ranging from seat of your pants flying (aerobatics, bush, combat flying) to modelling and restoration projects, rounded off with a few token book reviews and (lowering the tone/tome) prizes for a readership survey draw.

Photographic content is of a high standard (that man Tokunaga gets his name on the masthead again!). As is often the case a sprinkling of generally bad English is used for some titling. With an editorial staff of four – they can hardly be the most hard-pressed editorial team in the world – you`d have thought someone would`ve noticed that the now sold-out Issue No.1 was entitled `Schnider` (sic) – no trophies there! 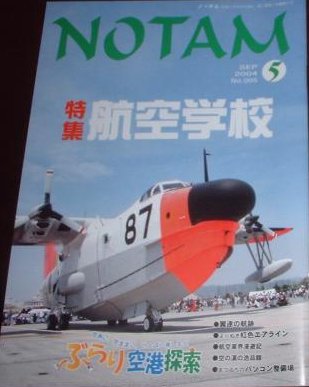 NOTAM appears to have been a general interest aviation magazine. Possibly only 6 issues were published, between May 2003 and May 2005, at approximately 6-month intervals. No further information.

A magazine for information exchange between Japan and Russia in the field of aerospace and aviation. Aims to provide an in-depth analysis which will objectively reflect the diverse situation in Russian aviation and cosmonautics, and detailed coverage of various issues of scientific and technical cooperation between Russian organizations and foreign partners.

Only six issues published during the 1990s. Frequency of publication not known. Dual Japanese/English text. Circa 1999 the Japanese edition was superceded by a Russian produced bi-monthly version.

Heli and Heliport was a B5 sized magazine that covered all aspects of civil helicopter operation – both private and public service. The first issue was dated 1988/7 and issue 71 was dated 1994/7. No further information. 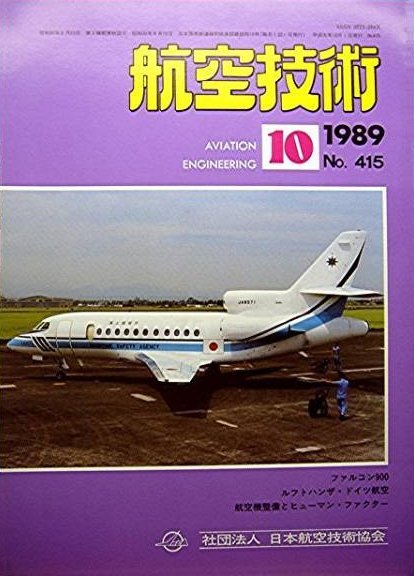 Koku Gizyutsu (Aviation Engineering, sometimes rendered as Aviation Technology) was a monthly magazine concentrating on the technology and business aspects of aviation and aerospace. It included articles on the aviation industry, aerodynamics, flight safety, new technical developments etc. It also featured articles on the present state of various market sectors, and technical appraisals of various aircraft and engine designs. Issue 415 was dated 1989/10. 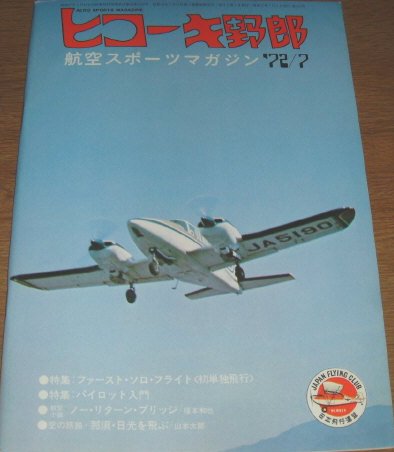 Aero Sports Magazine was the official magazine of the Japan Flying Club. It featured news and articles on the activities of the club, light aircraft and on private flying in general. B5 size with 70 pages in each, illustrated with b+w photos and line drawings. Issue 109 was dated 1972/7.

Aerospace Japan was aimed at providing aerospace and defence business information for the professional. It therefore covered worldwide developments in aerospace from the business point of view. Initially published bi-monthly, it appeared monthly by 1987. It ceased publication some time after 1994. Issue no.142 – Vol.13 No.8 – was dated August 1992.

During the early days of World War II, the Imperial Japanese Navy and Army’s Air Forces had minimal interest in the development of a tailless configuration airplane. This dramatically contrasted with the view held by their main ally, Nazi Germany, who had experimented with tailless aircraft for several years. The lack of effort by the Japanese Navy, the one service viewed by most observers as the forerunner in military aviation in Japan, did not imply that the Army would follow them. Indeed, the Army quickly started a crash design program in late 1939. Because of the lateness of their start, the Japanese Army top brass knew that they needed to set up a program that could achieve in a short time, and with a dwindling financial resource base, maximum results. 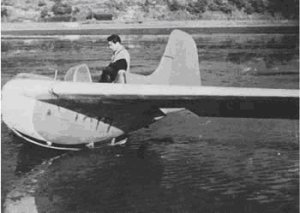 The HK1 with a rudder but no tailplane. (photo, via author)

Efforts by the Imperial Japanese Army concentrated on the glider designs of the Kayaba Works Corporation, as well as the Mitsubishi Company’s tailless aircraft designs, which copied the German Messerschmitt Me 163 rocket fighter concept. The Kayaba designs were first conceived to collect data on tailless airplane configurations. Many designs were submitted by engineers inside Kayaba and outside consultants. The most promising design program was the HK1. The HK1 was the brainchild of a brilliant, albeit, obscure Japanese engineer, Dr. Hidemasa Kimura. He based his design on the concept of Kumazo Hino, the pioneer aviator who was the first person in Japan to fly a plane – performing the feat in the spring of 1910. Initial tests on the HK1 design were promising and lead the Japanese Army to sponsor an aircraft concept program – the first step in establishing a development and production program for a military aircraft. Working closely with Kayaba’s Chief Developing Designer, Dr. Shigeki Naito, Kimura designed and constructed a tailless test model aircraft. The model, designated the KU2, was extensively tested between early November 1940 and May 1941. 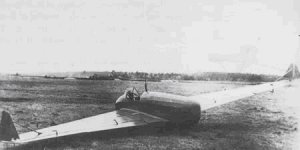 The KU2 with wingtip rudders. (photo, via author)

After the test phase of the KU2 was over, Dr. Kimura, with the assistance of another brilliant Japanese engineer, Joji Washimi, began to work on a more advance design in the spring of 1941: the KU3 was born. The KU3 was a two-system experimental model, it had no vertical control surfaces and the edges of its wings were cranked, incorporating sections of different angles of sweepback. The KU3 had three-control surfaces arrayed along the trailing edge of each wing. The KU3 made 65 test flights before the only built model crash landed in late 1941. 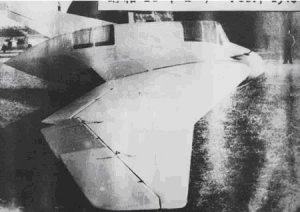 Kimura wasn’t done with tailless aircraft. He took the data recollected on the KU3 program and used it to built the first Japanese powered tailless aircraft, the KU4. At this moment time was running out for Japan and Kayaba had not shown sufficient concrete results to merit further investment of resources. Japan’s limited resources were needed in other areas. The tide of war had turned against the Empire. The KU4 program was terminated by the Army as soon as the drawings were on the table. This marked the end of any official Japanese-funded research on a tailless aircraft design. Then in 1944, the appearance of America’s massive B-29 bombers in the skies over Japan’s Home Island changed the equation. The Japanese Army, now with the complete support of the Navy, re-started the tailless aircraft program. The need for a high flying interceptor plane to take out the B-29s became imperative. The Army knew time was running out, and so turned to the Germans for help. They knew that any aircraft development program would take years to produce a serviceable plane, and in the case of a radical design such as a tailless aircraft, the development process could take at least a decade. With this situation on their minds, the Japanese Navy leadership decided that the only route available to them was to copy the only successfully operational tailless design program in the world, Germany’s Me 163 Komet rocket fighter. The Mitsubishi Company, using German supplied Me 163 Operational Manuals as well as a Walter HWK 109-509 rocket engine, was selected for the job of interpreting the data given by the Germans. They promptly went to work on a design for the new tailless airplane. In a matter of only months, thanks to the assistance of German engineers, Mitsubishi produced a test version of what they thought would be the next great Japanese plane. The J8M-1 Shusui (Swinging Sword) was unveiled in late December 1944. Mitsubishi built first a glider version for data collection purposes. It first took to the air around mid January 1945 and was subsequently placed in full prototype production mode. Two prototypes models were designated for the two services, the previously mentioned J8M-1 for the Navy and the Army’s Ki-200.

Pilots started taxi-run practices with the J8M-1 gliders at Kashima Air Base in the spring of 1945. Rigorous testing and practice runs were made at Kashima by Navy pilots in preparation for the day when the Walter rocket engines would be fitted on the J8M-1 and the aircraft could take-off under their own power. The first powered J8M-1, fitted with the Walter engine, first took to the air on the morning of June 7th, 1945. A catastrophic engine failure shortly after takeoff resulted in a massive crash and subsequent explosion. The test pilot was killed instantly. This crash and the end of the war just two months after, spelled the end of the minimal Japanese attempt of acquiring a tailless fighter. The J8M-1 never entered assembly line production status, and the next generation Ki-202 advanced fighter never made it off the drawing board. When the Allies entered Japan in August 1945, they discovered, to their relief, a crude tailless program, a program that was doomed before it could takeoff.