A part-time volunteer defence force was re-established in 1991, along the lines of a similar organisation from the 1930s. A small aviation unit was formed in 1992. Initially it operated a mix of single-engined aircraft and gliders from two ex-Soviet DOSAAF airfields. The aviation unit mainly provided air experience flights and parachuting platforms, much like the former-Soviet DOSAAF organisation, but in 1998 the gliders were sold off to civilian owners.

After 1998 KASPAR worked more closely with the Air Force (KOP). It’s duties included policing, border patrol, and anti-smuggling operations. KASPAR came under the direct command of the Ministry of National Defence rather than the Air Force. In 2009 the aviation assets of KASPAR were transferred to the Air Force. KASPAR still retains an Aviation Unit, but this is now a pool of part-time personnel and not a separate flying unit.

All aircraft were based at Kyviskes.

The main air base was Kyviskes.

In addition to the main base, here are also a number of smaller airports and airfields around the country which are sometimes used by the Air Force.
Military Air Bases Listing – to be added.

This is a survey of Lithuanian aviation, defence and aircraft scale modelling magazines. All magazines are Lithuanian text only, unless otherwise stated. 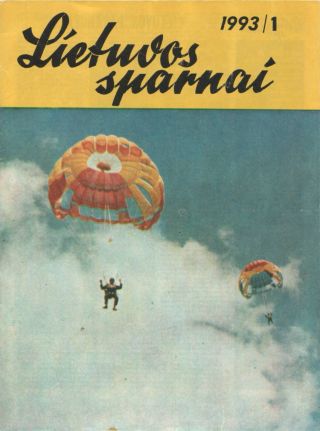 Research Journal of Vilnius Gediminas Technical University. Initially published under the title ‘Aviacija’, annually, from 1996 (Vol.1). In 2003 (Vol.VII) it became a quarterly journal under the present title. Covers a very wide range of topics from Lithuanian aviation history to aerospace materials science.

Lithuania is located in northern Europe, on the eastern side of the Baltic Sea. Lithuania is bordered by Latvia to the north, Belarus to the east and south east, and Poland and the Kaliningrad area of Russia to the south west. To the west lies the Baltic Sea. The terrain is mostly flat, with only a few areas near the eastern border higher than 200 m (656 ft) above sea level. There are many lakes, moors and bogs but plenty of fertile soil has resulted in a large agricultural industry. The total land area is 65,200 sq km (25,174 sq miles).
The Population of 3.7 million (2000 figure) comprises 80% of Lithuanian origin, 9% Russian, 7% Polish, 2% Belorussian and 2% other ethnic groups. The capital city is Vilnius.

Text to be added on the development of aviation in Lithuania.

Lithuanian civil aircraft were registered in the series Z-LAAA onwards 1919-1929 and LY-AAA onwards 1929-1939, although the prefix RY- seems to have been used on occasion. The LY-xxx series was reintroduced in 1991.

Lithuanian Aviation Bibliography – to be added


During the Middle Ages, Lithuania was transformed from a small duchy into the largest state in Europe. In 1386 a union with Poland was formed by royal marriage, but the 1795 partition of Poland resulted in the division of Lithuania between Russia and Prussia. From 1915 the territory was occupied by the German army fighting the Russians.

The Russian-German truce of 15 December 1917 followed the Russian Revolution of November 1917. During this period of peace on the Eastern Front, Lithuania proclaimed independence from Russia on 16 February 1918. The Bolsheviks immediately attempted to invade, but were repulsed by German forces. The Treaty of Brest-Litovsk of 3 March 1918 formally ended the fighting. With the German surrender on 11 November 1918, German forces began to withdraw from Lithuania and another Bolshevik invasion was mounted. The poorly trained and ill-equipped Lithuanian army was unable to prevent the capture of the capital city, Vilnius, on 5 January 1919.

The capture of Vilnius by the Bolsheviks brought Poland into the war on the Lithuanian side – the Poles also had claims on the city. With Polish help the Russians were driven from the country. The USSR recognised Lithuania by the Treaty of Moscow on 12 July 1920, which also ceded Vilnius to Lithuania. The Lithuanians took control of Vilnius on 26 August 1920, but they were now fighting Poland for control of the city. On 7 October 1920 fighting ceased when a treaty was signed giving Vilnius to Lithuania. Two days later the Poles reneged on the treaty and seized the city and it’s surrounding area – about one third of Lithuanian territory. A cold war existed between Lithuania and Poland until December 1927.

On 11 January 1923 the predominantly German seaport of Memel (Klaipeda in Lithuanian) was occupied by Lithuanian troops, after being under League of Nations control since 1919. The democratic constitution adopted in 1922 was overthrown in a military coup on 17 December 1926. In the Spring of 1939, Memel and the surrounding territory was annexed by the resurgent Nazi Germany.

Under the 23 August 1939 Russian-German Non-Aggression Pact, Lithuania was initially assigned to German control, but this was later changed to Russia. Following the defeat of Poland by Germany in September 1939, Lithuania was forced to accept a mutual assistance treaty with the USSR, which allowed for the stationing of Soviet troops on Lithuanian territory. On 15 June 1940 Lithuania was invaded and occupied by Soviet troops. Soviet-style elections were organised and the resulting communist parliament applied for membership of the Soviet Union. This was granted on 3 August 1940 as the Lithuanian Soviet Socialist Republic.

On 22 June 1941 Germany invaded the Soviet Union. Lithuania was occupied by Nazi Germany 1941-44, during which time almost a quarter of a million people were killed. In 1944 the Soviet Red Army retook the territory and re-imposed control. Many thousands of nationalist sympathisers were deported or killed. In January 1945 Memel was captured by Soviet troops and re-incorporated into Lithuanian territory.

During the post-war years the country was industrialised, but opposition groups later took advantage of increased openness, under Soviet leader M. Gorbachev to press for independence. The Lithuanian Supreme Soviet proclaimed sovereignty in May 1989, and on 11 March 1990 declared full independence and adopted the country’s current name. Soviet Interior Ministry troops were ordered to occupy communist party buildings, and a trade embargo was imposed by the USSR.

The Lithuanians postponed the implementation of independence in favour of talks with Moscow.
When the talks broke down, on 13 January 1991 Soviet troops began attacking and occupying further buildings in Vilnius – resulting in at least 14 people being killed. A referendum on independence was overwhelmingly approved in February 1991, and continued clashes with Soviet troops led to more deaths.

After the failure of the Soviet coup in August, the USSR recognised Lithuanian independence on 6 September 1991. The withdrawal of Soviet troops from the country began in March 1992 and was completed by 31 August 1993. In November 2002 Lithuania was invited to join NATO, and it formally joined on 2 April 2004.