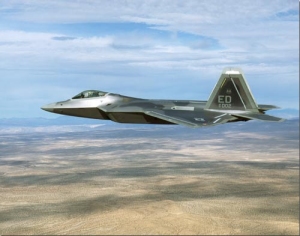 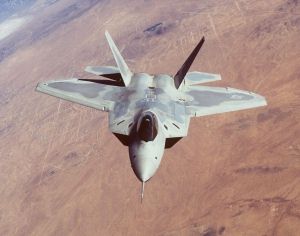 The F-22 Raptor will become the replacement for the F-15 Eagle air-superiority fighter. It combines a stealth design with highly maneuverable, supersonic (supercruise) speed, with air-to-air and air-to-ground capabilities. Before its selection as winner of the Advanced Tactical Fighter competition, there was a four and a half year demonstration/validation programme. This involved two YF-22 prototypes and two prototype engine, the Pratt & Whitney YF119 and the General Electric YF120. The demonstration/validation programme ended in December 1990. The first F-22 Raptor next-generation air dominance fighter, 4001, was unveiled at a rollout ceremony at Marietta, Georgia, on 9th April 1997. It made its first flight on 7th September 1997. The second Raptor, 4002, flew for the first time on 29th June 1998.

The ‘team’ contracted to develop the F-22 Raptor is Lockheed Martin Aeronautics Company and Boeing Defense and Space Group’s Military Airplane Division. The ‘team’ was formed in 1986, when Lockheed, Boeing and General Dynamics (now Lockheed Martin Aeronautics Co.) joined forces for the Advanced Tactical Fighter competition. The USAF plans to procure 438 production F-22s each powered by a pair of Pratt & Whitney F119 engines.

This aircraft is being developed to counter the increasing sophistication and threat of hostile air forces and air defense systems in use around the world. The F-22 will be lethal and survivable, with its balance of increased speed and range, enhanced offensive and defensive avionics, and reduced observability. The new high thrust-to-weight ratio engine, the Pratt & Whitney F119-PW-100, is designed for efficient supersonic speeds without afterburner (called supercruise). The engines (of approximately 35,000 lb. thrust), will have two-dimensional thrust vectoring, which will give the Raptor superior maneuverability.

The F-22 is capable of carrying existing and planned weapons in internal bays. These will include six radar-guided AIM-120C AMRAMs, and two heat seeking, short range AIM-9M Sidewinders. The F-22 will also have an internal M61A2 20mm cannon, an advanced version of the M61 Gatling gun. Additionally it will have a ground attack capability, and it can carry two 1,000 lb. GBU-32 Joint Direct Attack Munitions (JDAM) internally.

According to LMASC, on 12th January 1999, a new MiG fighter conceived as a Russian response to the Raptor was unveiled. The multifunction Fighter, known to the west as “Project 1.42”, is proclaimed by the MAPO-MiG company to be able to outperform the F-22.

Note: Manufacturing workshare is split between Boeing at St Louis, and Lockheed Martin at Fort Worth and Marietta. Final assembly is at Marietta.

‘Lockheed Martin F-22 Raptor: An Illustrated History’ [Order this book from Amazon UK]
by Mike Wallace, Bill Holden
Published by Schiffer Publishing, 1998 ISBN: 0 76430 558 1
* Very well illustrated profile of the F-22, but not quite so detailed.