The service was formed in the 1980s as Arma Aerea del Ejercito Paraguayo with some liaison aircraft and was later renamed Aviación Ejército Paraguaya. The aircraft are operated by Grupo Aéreo de Transporte Especiales of the FAP although they have Ejército serials. In 2009 the aircraft were absorbed into the Air Force.

All aircraft were transfered to the Air Force in 2010.

It was reported in October 2013 that the Army is considering the purchase of a number to troop transport helicopters.

Serials began with number 1 and were used in chronological order as aircraft arrived with Army Aviation. The prefix was TE.

Any photographs illustrating this air arm would be welcome.
Airfield Profile

Nearest Town/City: to be added.

The base became operational in 1926. The I Brigada Aérea and the Brigada Aerotransportada "Silvio Pettirossi" operate from this base.

The following organisations are, or were, permanently based at this location:

Feature articles to be added.

This section describes and illustrates the various national insignia used by Paraguayan Army Aviation since its formation:

The fin flash was displayed on the rudder. The aircraft had the serial number applied on the fuselage.

One A36 Bonanza obtained from MINDEF and operated from 1989. Used by the Aviación Ejército Paraguaya. The significance of the ‘B’ in the serial is not known. 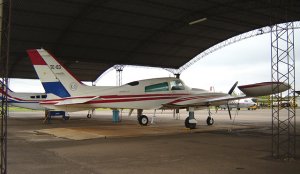 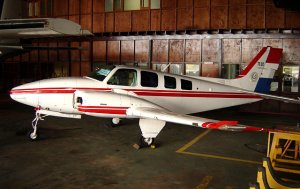