No one who saw the First Gulf War in 1991 was glued to the television set looking at the majestic sight of the United States Army’s newest Theater Anti-Missile System, the now famous MIM-104 Patriot. Night after night, the vaunted weapon was launched in an attempt to intercept Iraq’s unsophisticated and terrible inaccurate Scud mid range missile. The image of America’s missile intercepting an incoming object captured the attention of almost anyone. As new and sensational as the Patriot looked in that conflict, the system was actually in its third decade of life.

Born during the height of the Cold War (1963) in an attempt by the US to overlap their complex HAWK air defense platform, the Army decided to develop the Air Defense System (AADS). More than thirty summers has passed since the first blue print for the MIM-104 was submitted for initial review. Baptized under fire in the gulf and in many other theaters, the Patriot has become America’s top defensive weapon. Multiples upgrades were performed since that summer. Changes that had improved dramatically the capability of the system.

One of the most significant modifications came in the spring of 2005 when the Patriot was fitted with the most advance targeting array in the world, the now famous MPQ-53V. The 53V is a phased array radar and associated processor that control the missile’s trajectory from its launch. The radar is a multifunctional, electronically scanned array mounted on the M-860 trailer which is towed by an M Engagement Control Center. For target identification, the 53V used the powerful Hazeltine (TPX-46-7) Target Identification Friend or Foe (IFF). A self-contain data link is use to communicate with the rest of the missile package.

The Patriot was designed to operate in all weather conditions without losing operational effectiveness. It can destroy aircraft and missiles at all altitudes. It can direct several missiles to engage multiple targets simultaneously even in the toughest electronic jamming environment. For this, the MPQ utilized a top tier lens array which operated an free optical feed. Sum and difference patterns are individually optimized with a monopulse feed optimizing its efficiency. The aperture is round and utilized around 5000 ferrite phase shifter. A four bit, flux driven, non-reciprocal ferrite phase shifter and waveguide radiators are located at both temperatures. A separate, redundant array for missile guidance and IFF is also part of the overall platform’ profile.

The most recognizable feature of radar is its face. A huge, phased array face dominates the upper part of the antenna unit. The ‘face’ performs as both, surveillance and tracking mechanism. Below the face lays an almost circular, 5000 element phase shifter which has two smaller units (each with 50 elements a piece). A row of 18 rectangular boxes divided the antenna almost in half, with access boxes. Two slight larger planar arrays are for the command-guidance and it’s receiving its links directly for the missile.

Before an engagement is achieved, the radar array has to be aligned to cover the much of expected direction of attack. During the engagement, the radio beam is steered electronically in azimuth and elevation. The system was designed in such a mater than it can prioritize a single target from several locations.

The radar utilized a Track-via-Missile (TVM) System in order to suppress its overall cost. In semi-active systems, the radar illuminates the target and a seeker in the missile’s head tracks the reflecting energy. Then the missile computes the interception pattern based on its bearing to the engaging object. The TVM allows the missile to relay the same bearing data to the engagement control station via the radar. The platform’s powerful processors comb through the information with the absolute position of the target, the missile and the profile (velocity, altitude, bearings) of the engaging object and generate tracking commands to guide the warhead to the optimums interception point. In the terminal phase, the missile’s acquisition system acquires the target and relays the data to the phase array where the final intercepting calculations are performed.

The main advantage the TVM system has over its competitors is that the powerful ground based processors are use mostly for guidance thus allowing more data interpretation time. This processing technique make it’s difficult for countermeasures to jam the Patriot’s targeting trajectory. Even when the Patriot’s targeting radar is receiving jamming strobe, its missile can still maintain missile-to-target bearing data from the TVM system. On top of this, the ground based processors have sufficient computing power to resolve troubling jamming issues such as blinking jamming, where two aircrafts in formation jam alternatively to frustrate home-on-jam modes.

Raytheon, the Patriot’s primary contractor (its have all the Defense Department contracts for the system that surpassed the $ 5 million mark) had produced a reported 128 MPQ-53V units for the US Army and an estimated 26 for Japan’s Self Defense Force (2007 totals). Price for each unit is around $ 2.5 million. 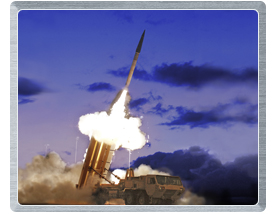